"Pestilences extinguished, the world becomes smaller,
for a long time the lands will be inhabited peacefully.
People will travel safely through the sky (over) land and seas:
then wars will start up again."

Sixth Sense will be a six-character POV survival horror game/story set in a third-person narrative, coded in ChoiceScript and played like a typical COG. Chapters will be character locked, with the exception of the prologue, with your choices impacting later chapters/characters as time goes on. Characters will also have their own personal stats and relationships, which will shape and impact how you will, or won’t, play when as them, and can change, or improve, as the story progresses. You will also have the ability to hinder or create romances—or totally break them apart—among the six characters, though with a few limits.

Every choice you make will have a lasting impact. From scenes to character relationships. From who will live and who will die. The lives of six strangers depend solely on how you choose to play the game.

Six characters. Six lives. Six deaths. Your actions will help guide them to safety or doom them. Be the unseen force behind their choices, the voice whispering in their ears, their sixth sense. How will you play the game, when anyone can die thanks to your choices? Will you choose to kill all or none? One or two? What will you do when someone stops following your directions, instead choosing to ignore you, and take their own life into their hands?

Will you break the typical horror archetype and have the Blonde Air-Head be the only one to survive? While the supposed Final Girl dies a gruesome death in the first act? Your choices will impact everything, and shape the world around you.

(Author’s Note: The “Blonde Air-Head” is just a reference on how they make out one of the characters to be less smart and, or, likeable than the supposed leading actor/actress.)

All of this is still a WIP, and I have no plans of having anything playable up anytime soon. I just love Horror Movies so much, along with survival horror games, where your choices really do matter. If Sixth Sense ends up getting enough interest in it, I may take some time off my other project, Beyond: Rebirth, and dedicate time to this potential project, as things have been very slow going for B:R, due to work, classes and family matters.

If you have questions, comments, or anything you want to say, I’d love to hear it!

Until Dawn. The Letter. Hidden Agenda. The Cabin in the Woods. Pretty much every Horror Movie ever made.

Heyy you are back

This has got me interested. I love your other project so this one has me hyped as well lol

Just make sure that the story isn’t too much like a typical horror flick. I don’t like it when those cliches are overused but if you plan a deconstruction then they can be alright

Love the idea, finally I can make my own horror movie!
My only problem is why you mad Niall O’Sullivan the nerd archetype he looks more “nice guy” then nerd

Love the idea, finally I can make my own horror movie!

The archetypes aren’t really finalized for each character. The images atm are more of a placeholder, to give an idea of what the character may/may not look like. Things can, and probably will, change drastically as time goes on. I was originally going to have a picture of Emma Stone for the nerdish character, but… Eh. I couldn’t find one to fit the 1000x500 size theme I was going with for now.

Heyy you are back

Been taking a long, extended break haha. I’m happy to be back! <3

Just make sure that the story isn’t too much like a typical horror flick. I don’t like it when those cliches are overused but if you plan a deconstruction then they can be alright

I have a few ideas on how to do this. Of course, I love clichés, so there will be a few!

OH MY FUCKING GOD YES!!! This sounds fucking awesome! You have to do this! This sounded so cool, it’s the first time I’ve actually read through an interest check!

Bring it on!! My body is ready

This is my first attempt at making a .gif, but I wanted to show off the characters, so… Here they are! In semi-animated form…

Hopefully, the way they show up in the picture will help in deducing which archetypes I’ll give to who.

Woah, that art is gorgeous! Also the gif effect is rly cool hehe. This seems like an interesting concept! I definitely thought Until Dawn too on reading the description.

Actually, I think it’d be interesting too if we could choose to play each character either straight w their archetype or as a deconstruction, with varying results on the overall storyline and inter-character relationships.

Welp, I’ve seemed to have become invested in this project haha, so, here you go! This first of six character profiles. This is a WIP and might be changed in the future, but I hope you like it! 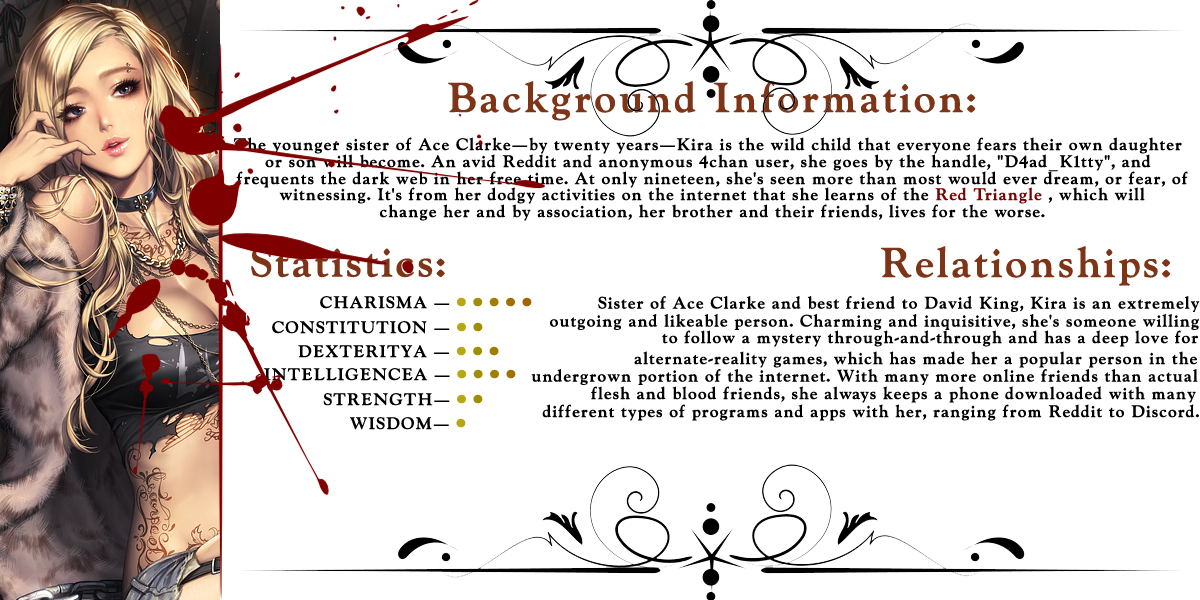 Anyways, since this took so long, I’ll probably just be adding information into the main post from now on.

I don’t even like horror and I can guarantee that I’ll be all over this game. This concept sounds soooooo good.

Yes, please do this! It sounds like everything I want in a game. I’m a huge fan of The Letter and of horror movies in general. Can’t wait to kill all of the characters. And then to save them all. And then to kill some of them again. And then…

This looks really interesting! Can’t wait to see how this turns out.

Very cool .gif, and I like the detail in the write up.

Listing The Cabin in the Woods also gets attention, as it was probably the best horror film of this decade.

Sounds good I will defo play it to see

Exactly the type of story I would play.

Welp, since this seems to be getting a pretty good response, here’s a synopsis I posted over on Tumblr. Nothing is final, but here’s an early concept draft:

The year is 2023, and ARG and LARP’s have taken the world by storm, and players are hungry for more. More action, more danger, more risks. With the flop of the high-tech VR’s in 2021, people have resolved to look out, rather than in, in the two years following, opening their eyes for what seemed like the first time in decades. Those both old and young have taken to the streets to play games of grandeur and infamy. But, when players call for more, the question begins to pop up, “What are you willing to risk in your search for thrills?”. The answers by many? “Anything.”, they call and scream in response.

When players of the ARG’s and LARP’s begin coming up dead, first a sole killing, and then in groups of two, three, four and fives, each having a red triangle carved into their foreheads, everyone begins to understand that if they lose, the final outcome will be their death. Still, with a drive for the unknown, many continue to push forward, forfeiting their safety in hopes of uncovering the mysteries around them.

This is still a WIP, but what do you think? I could always make it more creepy, but, ya… haha.

#Character1 goes to character 1’s stats
and so on…?

The stats would change depending on the character you are at that moment.

i.e.: Kira having a 5 in charisma, and then, say, Ace having a 5 in Intelligence. And so forth, to make each of them unique so you have to think about how best to continue the story as them.

They will also all have their own relationship stats. I hope this answered your questions!

I could always make it more creepy, but, ya… haha.

Creepy is never enough, bring it on!

Who’s ready for a little more insight on the characters? Here are their titles: