I would like to apologize to everyone that’s volunteered. It will be delayed for a bit longer as I’m currently in the hospital after being hit by a car (I’m one of those darn pesky bikers) luckily it wasn’t horrible thankfully, but right now I’m getting checked to make sure nothing’s broken. Lets hope this provides a valid excuse to skip work!

Update: Nothing broken. Aside from my glasses. So just some relative blindness and pain for a few days. Thankfully that’s all I’ll have to go through.

Alright so the Alpha for the revised version is officially on-going! Thanks to everyone who volunteered, and if you didn’t make it this time don’t feel bad. I plan on doing more Alpha groups (especially once this semester is done with) and eventually an open beta.

Your bed was very large and was covered witih big, warm, heavy blankets, and the cost alone was enormous.

Thanks @Cecilia_Rosewood for editing the first post.
So The Legend of The Battle Mage has been revised and now the prologue is available for open testing.
Special thanks to my private Alpha testers who are testing and helping me improve my writing, so that it will be presentableish to the public.

They cheered and celebrated as they tore apart fully grown men in half.

Pick one, either they were tearing people apart or in half

Wielding a giant sword nearly it’s size in one hand, you this particular Val’Shuun cleave an entire group of men in half, whilst commanding its fellow Val’Shuun in the midst of battle.

You accidentally a word around at the bolded part.

wading its way through its reveling brethen

A disordered mass of creatures. Some posses long talons

Double S on the end too.

Luckily, majority of the Val’Shuun were nowhere as fearsome

The soldiers earlier did noy think

It was not a bond so easily shakened.

With a defeaning sound, it impacted in to the Val’Shuun horde

Deafening. Suggest replacing impacted with slammed. Into is one word, not two.

Despite the havoc that your spell wreaked upon the enemy,

Soon another horde began to form, and they charged at you with renewed vengeance

Fervour (or US spelling thereof).

In the rear with you, your Archer fires

At rather than in.

Ok, that’s everything I spotted.

Really like the new prologue, but the cliffhanger killed me, anyway keep up the great work it was Awesome!

Your help is greatly appreciated @LordOfLA

@SuperNova thanks! I spent days staring at the old prologue and the old chapter 1. I decided I hated how it was turning out. I didn’t like how I was writing my concept so I went through some long days rethinking and revising.

Edit: Ha… My computer loves me. It refuses to update my game, so when I try to test it out on the public link, all I get is the old version.

So many “hims” in the group, is this just for the testing or is it your plan to go back and let us choose the gender of our companions through the course of the story? Personally I’d try to reword your companions in such a way that it refers to them only by class in the prologue. (Think you did just that with the cleric.) That way the choice of who that character is remains with the reader when we meet our merry band.

For your companions, I wanted some to be only male, some only female, and some you would choose the gender. So I’m trying to work that as ambiguously as possible in the prologue.

When you meet them later on, you’ll find some have preset genders already, while others you can choose the gender. I’m trying to experiment with better ways on how to do that, and like @IronRaptor said referring to them by class could work, but just as @stsword said as well. You can’t really feel concern for them when they’re just a class name. So I opted for a middle ground of trying to show the gender for certain specific ones ( Cleric will always be a guy) and trying to be ambiguous for the ones who’s gender you can choose.

For your companions, I wanted some to be only male, some only female, and some you would choose the gender.

So I opted for a middle ground of trying to show the gender for certain specific ones ( Cleric will always be a guy) and trying to be ambiguous for the ones who’s gender you can choose.

I like the idea of choosing characther genders , it’s pretty neat , but if you’d be able to choose all of the genders , it might get out of hand , and the characters might love their personality (or so I’m guessing) , so I think some stereotipical genders should be set for some of the companions (Beserker = usually male)

You could, but at the very least in the beginning you’re going to have to have companions (they can be your best friends, or just some breathing meatshields). You also won’t be all powerful, at least not yet. Legends have to grow after all.

Now if you want to ditch your companions, I’ll consider it.

I am planning on this to be more than one book, and each book covers a certain amount of time in your life.

Also you’re not the only mage with great potential.
This doesn’t necessarily mean you can’t conquer with your magical power. Just if you aren’t strong enough, you probably won’t be able to have everything under your control.

Chapter 1 is nearing completion… Should have it up in a day or two hopefully (so long as no complications occur). Otherwise keep enjoying the prologue and rejoice in the fact that this WIP isn’t dead.

Also updated Prologue a bit, and thanks for the likes despite the inactivity. It inspires me, because it basically says “Hey I actually enjoyed reading this, so… don’t abandon the WIP? puppy eyes”

Also apologies about the relative inactivity! CSComp, personal life, and general writers block has been taking a toll on my writing time!

Updating the game in about an hour or two. Unfortunately I kept adding more things to chapter 1 so it won’t be a complete rough draft, but I figure it’d be best to stop delaying the update. Alas that is how writing seems to work.

On a side note: I realized that I updated my game with the original version of the ending file. Oops

Known Bugs:
After entering the practice room, being sent to the beginning of chapter 1
(IMPORTANT: If you experience this, please let me know and if possible let me know what happened)

%{} - I sometimes put % instead of $, so if you encounter that, letting me know would very much be appreciated.

Also, be sure to open the demo in a private window to ensure you have the most up to date version! (Sometimes cookies just don’t clear right.)

I really like where your going with this story I’m so stoked to see where you go from here and I didn’t find any errors through my first play through so I will go back through to see if I can find any. Im not even a fan of mages and being able to actually build him/her the way you want is awesome. I’m definitely going for an all out swordsmen. They will fear the sword. Lol keep up the good work.

Ah, so you’ll refuse the way of ultimate power, for the discipline of the blade?

This actually has gotten my mind working on nicknames and other variables for people who “stray” from the path of usual mage. Yes, definitely thinking of more scenarios for people that decide to not be a “proper” mage.

Won’t be implemented till later on, but will definitely will be fun to write.

I love the demo so far, it just keeps improving and I can’t wait for more. Keep up the good work!
But I also noticed these errors with the gender of the MC and Max/Maxxie.
@EmperorHeartless 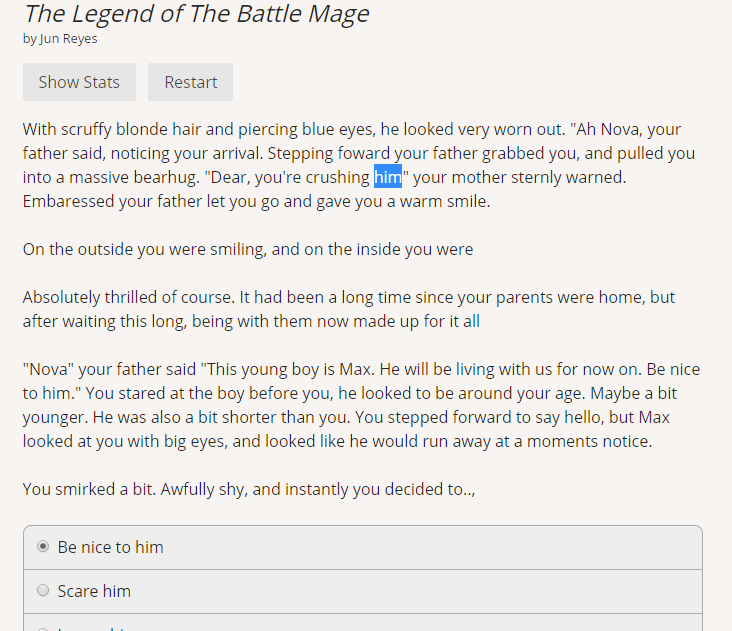 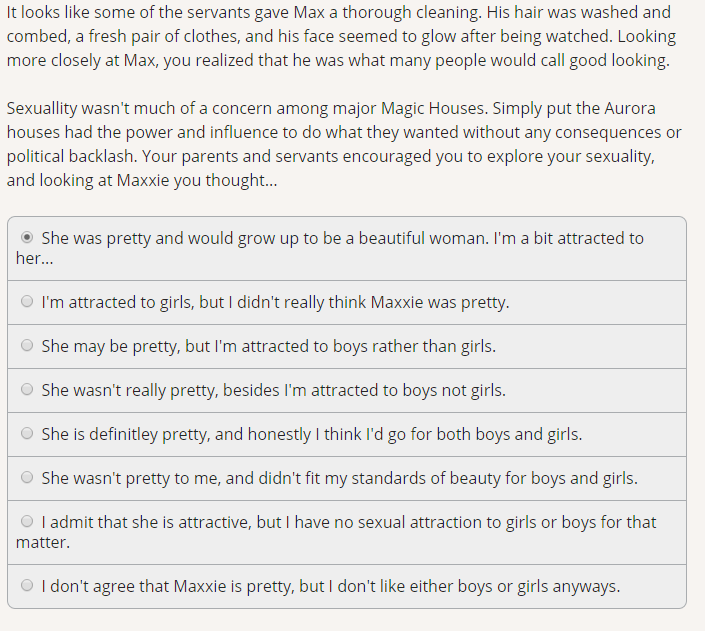 Thank you! The gender identifiers… So many I’d them that I’m bound to miss some. Will fix once I get out of bed.

Edit: I see the problem now. I had the *if statements checking your character’s gender when it should have been tracking Max/Maxxies gender.