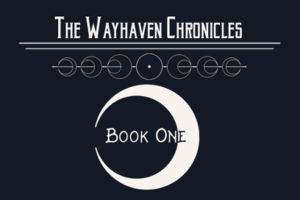 Your first case as a detective is forcing you to open your eyes to a world bigger than you thought. But maybe it’s better to keep them closed. Knowing too much doesn’t help anyone sleep at night! Seems the supernatural didn’t get the memo that nothing exciting ever happens in the little town of Wayhaven. It’s 40% off until March 15th!

The Wayhaven Chronicles: Book One is a thrilling 440,000 word interactive fantasy novel by Mishka Jenkins, where your choices control the story. It’s entirely text-based—without graphics or sound effects—and fueled by the vast, unstoppable power of your imagination.

Experience the big and small moments with a host of characters throughout this exciting twist on the usual supernatural tale—a story which will take you through heart-pounding romance, smile-filled friendships, and shiver-inducing drama.

• Play as female, male, or non-binary—with options to be straight, gay, or bisexual.
• Discover the start of distinct and lasting romances with the vampires of Unit Bravo.
• Define and refine relationships with a variety of characters-from friends, family, exes, and enemies.
• Decide how you will fulfill the job of detective, through Deduction, Combat, Science, or People skills.
• Discover the truth of what awaits in Wayhaven in a playstyle that suits your personality.
• Indulge in true moments of romance, friendship, drama, and fun!

Mishka Jenkins developed this game using ChoiceScript, a simple programming language for writing multiple-choice interactive novels like these. Writing games with ChoiceScript is easy and fun, even for authors with no programming experience. Write your own game and Hosted Games will publish it for you, giving you a share of the revenue your game produces.

I know there’s been a bit of a thing with the Apple app store so you may already be aware. Wayhaven IS available but I’m not seeing it in any search results, either for “wayhaven” or “hosted games.” It is available if you click the link in the game thread or if you access the Hosted Games company page on the app store.

Wait, did this allways have dual sided traits? I feel like that wasn’t there, but the demo is gone so I can’t see what it was before.

Also are the personality and trait stats gonna matter much?

Also are the personality and trait stats gonna matter much?

Trait stats? There’s only four. People, combat, Intel and deduction. But these four can play a big part in your playthroughs depending on your choices throughout the story.

Oh yeah these traits will be a part of it, especially through your interactions with the other characters but it’s pretty subtle in the differences.

Darn it, I do certain options and then a unrelated (in my head) stat goes up. Thanks

Congrats, the iOS launch might have been a tad late but it’s doing quite well! 3rd in RPGs and 20th in all games, which is as high as I think anything has gotten this year aside from possibly Choice of Rebels.

I played and beat it. It seems that the personal traits affect the way you interact with challenges while the professional side affects action sequences. E.g. deduction would be used to look for a way to distract your opponent. Your team statistics affect the interactions you have with Unit Bravo. From friendly, to romantic, to cold, it all plays a role. Others like optimism are just to show you what your character is like.

Yeah I’ve noticed very subtle differences in certain scenes and interactions depending on your personality and just how close you are to the team. It’s actually quite brilliant.

I absolutely love getting different perspectives every now and then. This is my favourite hosted game, and tied for best CYOA I have every played. I can’t wait for the sequel.

Wow is all I can muster! I am seriously in love with the lore and the setting. The way your words just suck me in that world is amazing! For me this game is a definite 10/10

I gotta say, I was a little shocked to see this thread pop up again, lol.

But to answer your question, I took a peek at the code and it looks like the first dialogue is unique to Adam’s route, and the “worm” dialogue is for the other routes, including the love triangle. I believe it’s different because it’s specifically Adam who is the one reflecting on the detective being taken.

OMG ty it was kiiiillliiiing me!
I checked and in Adam’s route, when the detective is taken, Nate is the P.O.V. Describing the team’s reaction

Oh, my bad! I was pretty tired when I checked on this so I must have glossed over the fact that it was Nate.

So, it’s always Adam reflecting unless you’re doing Adam’s route, and then it’s Nate. Now it makes a lot more sense to me why that POV is so much nicer, lol.

Ur amazing! Umm… Btw do u know where can i find a guide on understanding CoG gamescript?

If you mean just accessing the game’s code, there’s a handy guide here:

If you mean writing and using choicescript… well, I unfortunately can’t help you there. I’m sure there’s some good resources on these forums if you needed help with that!