New Hosted Game! "A Mummy Is Not An Antique" by Randy Condon 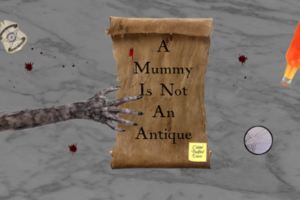 A Mummy Is Not An Antique is a 52,000 word interactive novel by Randy Condon, where your choices control the story. It’s entirely text-based—without graphics or sound effects—and fueled by the vast, unstoppable power of your imagination.

You play as the producer of a PBS antiques appraisal show, dutifully starting another on-site episode while managing the eccentric personalities of your cast and crew. Events go pear-shaped when a guest arrives with a mummified human body, allegedly the corpse of the local legendary Bog Mummy. Quickly a menagerie of forest shamans, a priest, show-security, a southern gentleman and his supposed grandchildren squabble with increasing fervor over ownership of the body.

• Play as male, female, or non-binary.
• Enjoy a comedy-horror adventure battling (and filming) the supernatural.
• Trade quips with the mummy of Professor Thadeus Frost, salesman extraordinaire of love potion and other dubious concoctions.
• Discover the secrets of the mysterious scroll behind all these shenanigans.
• Risk you and your crew’s life and limb to get the story. But how far is too far? You decide.
• Five different endings available, depending upon your choices.

Randy Condon developed this game using ChoiceScript, a simple programming language for writing multiple-choice interactive novels like these. Writing games with ChoiceScript is easy and fun, even for authors with no programming experience. Write your own game and Hosted Games will publish it for you, giving you a share of the revenue your game produces.

I still miss the old title, but either way I am looking forward to seeing this released. It’s pretty darn funny.

Wait, I just looked again at the summary. Looks like this underwent some significant rewrites.

I just finished my review of A Mummy is Not An Antique. Thanks for reading!

Dingo's Reviews (In Progress - A Mummy is Not an Antique) General

A Mummy Is Not An Antique By Randy Condon “Misfortune has already devastated me,” you say. “I produce antique appraisal shows for PBS. What’s going on?” Who ever thought that Antique Roadshow might have inspired a better story than the man who spent over £100,000 on a Tesco brand olive oil bottle? How did I miss this title? General Story: You are a PBS Antique Roadshow-esque producer smack dab in the middle of (unsurprisingly) an antique show. Providence drops a mummy in your camera lens,…