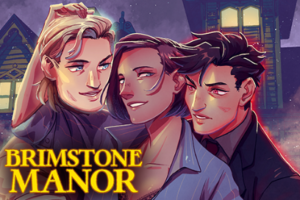 We’re proud to announce that Brimstone Manor, the latest in our “Heart’s Choice” line of multiple-choice interactive romance novels, is now available for iOS and Android in the “Heart’s Choice” app. You can also download it on Steam, or enjoy it on our website. It’s 40% off until February 17th!

Lose your heart to an angel or a demon and join the battle between chaos and order! Will you fly with the angels or cast a dark spell alongside the demon lord?

Brimstone Manor is a 168,000-word interactive supernatural romance novel by Frances Pauli. It’s entirely text-based, without graphics or sound effects, and fueled by the vast, unstoppable power of your imagination.

You’ve just been hired as the nanny at Brimstone Manor, a job that came with more than you bargained for. There’s something unusual about your new boss, Darien Stone…and your little charge as well. The house itself is full of secrets: What’s in the forbidden basement? Why do your employer’s rivals have an angelic glow about them? Is the big shaggy dog really a hellhound? Have you been hired to work for…a demon?

As you find your feet at Brimstone, you’ll uncover its secrets, care for an adorable demon toddler, learn magic, soar through the air on angels’ wings, and join a battle between heaven and hell—and a battle for your heart!

• Play as male, female, or non-binary; gay, straight, or poly.
• Romance a quirky journalist, a demon, or an angel—or two!
• Learn powerful magic, work miracles, and tame your boss’s hellhound!
• Befriend or defeat a terrifying demoness!
• Fly with the angels or cast demonic spells!
• Reveal the truth about demons to the world or keep your paranormal knowledge secret.

We hope you enjoy playing Brimstone Manor. We encourage you to tell your friends about it, and recommend the game on Facebook, Twitter, Tumblr, and other sites. Don’t forget: our initial download rate determines our ranking on the App Store. The more times you download in the first week, the better our games will rank.

Already bought the ad-free version! Loved the demo and I’m super excited to play the rest <3

Is this still technically in prerelease? I’m only able to play the first three chapters, same as the demo, even though it’s now in the 2-hour-between-chapter mode.

Its free for first playthrough I believe

It hasn’t been free for any playthroughs for me. I just can’t get past chapter 3.

There also aren’t any other HC games that are only free for one playthrough.

How should a reader interpret the following:

Everything about this room makes you feel like the ingénue.

How spicy is this game?

It’s listed as two chillis out of three on the app, so “medium/spicy romance”, where one chilli is “sweet” and three is “explicitly sexual”.

We encourage you to tell your friends about it, and recommend the game on Facebook, Twitter, Tumblr, and other sites.

i checked tumblr page which is linked in “about” section of this game and there were no posts about it. i think it would be easier to share the game info if we can reblog from official page so there would be links and other general information. but thats just my opinion

Is there like a discussion thread i missed? I didnt see one…

So Love brimstone manor, I’m not concerned with spoilers so mssg revealing plots to me will not be frowned upon:-P I REALLYwanted to end up with Darien AND Michael, I know the Michael gabby thing is offered but is it possible to end up with Both Darien and Michael???

No, the only poly route is with Michael and Gabby.