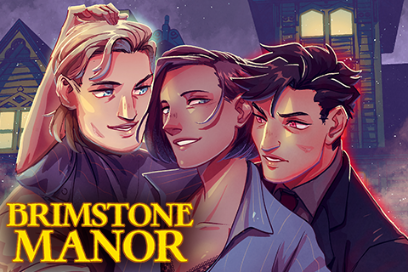 Lose your heart to an angel or a demon and join the battle between chaos and order! Will you fly with the angels or cast a dark spell alongside the demon lord? Brimstone Manor is a 168,000-word int…

Lose your heart to an angel or a demon and join the battle between chaos and order! Will you fly with the angels or cast a dark spell alongside the demon?

Oh my God I just played the demo and it was amazing! I can’t wait for Thursday! Nicki and Lucifer are adorable and the confrontation between Darien and Michael at the end was chef’s kiss

The demo was awesome! Can’t wait for Thursday

Ooh! I’ve been waiting for a heart’s choice release.

I played the demo and I’m hyped for the full game! Being a nanny for a handsome demon man and his adorable son is my kind of game. Michael and the reporter (male for me) seem fun to romance too!

I really enjoyed the demo and am very ready to give y’all my money.

Didn’t read the demo but will definitely play it when it’s released in the Heart Choice app. I already know I’m gonna lose my heart to a demon.

Loved the demo. Waiting un anticipation for the full game.

I thought the demo was pretty nice, but I will say that I got a bit of Jazz Age feeling from it, in that it feels like no matter what the game is written in a way that makes it seem like the MC is attracted to all the ROs no matter the gender even if you havent picked any flirty or attraction options. Also felt kind of weird that my MC thought Darien and Michael could have been fighting over him all of a sudden during their arguement focused on the kid…and also not to mention the MC has only been there for about a day at that point I believe lol. Besides that, I like the premise and taking care of the kid so far so I plan to give it a buy.

The premises kinda reminds me of Good Omens, haha. This is going to be nice, fun read.

Is there a way to affect the Chaos/Order stats? Throughout my entire first playthrough it didn’t budge once, which REALLY affects what you can influence in one of the fights.

Who exactly are the RO here?

Boss, Uncle, The other angel, Reporter Creep. Is the Vampire lady a RO?

The romance options seem to be Darien, Michael, Gabby, Michael and Gabby together, and the reporter.

Eh… None of them really interested me in the demo. Guess i’ll skip this book.

Very short but it was written wonderfully and I found it all romantic and charming. I just couldn’t resist Darien’s charms and his son put me in doting mother mode. My only disappointment is I was hoping for the poly options to include Darien & Michael x MC. The cover art sure made it appear as if it would be an option.

I was expecting that poly option too.

Glad I wasn’t the only one who thought I’d picked up on some unresolved tension between the two. Would’ve made for an interesting dynamic, that’s for sure.