Unnatural had choices in startup and that’s a released Hosted Game. (It’s mainly a menu with the story starting in the next file but it shouldn’t cause an error having choices)

I just said that because he had the same block of text in 2 .txt files. Kinda confusing :S 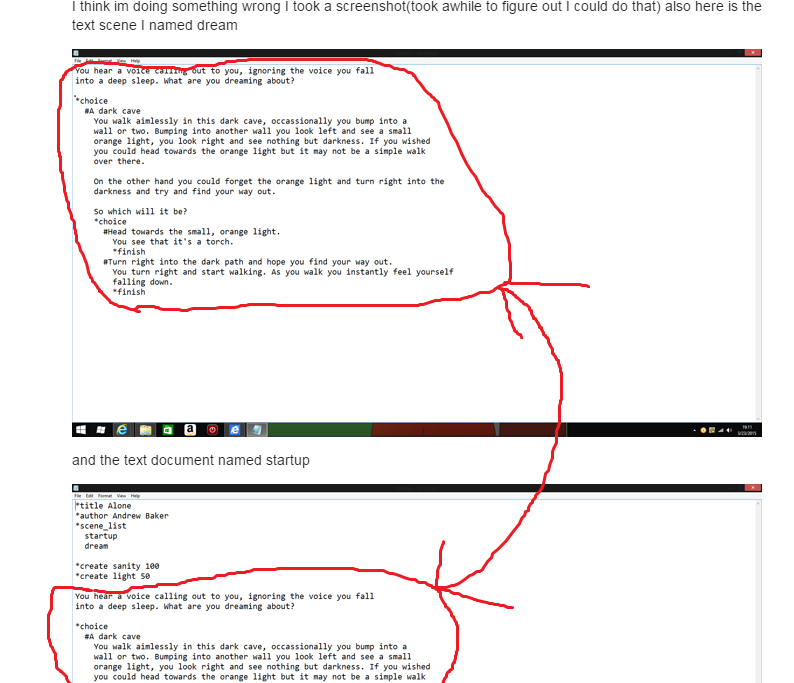 the 3 scenes I made are called startup1, choicescript_stats1, and dream

this is the dream text document and this

is the startup1 text document

Is there some other file I have to go to, do I have to make a index HTML document separate from the one that they give you when you’re trying to learn how to use it.

@Hazard
Yeah, you need to delete all the .txt files that came with the folder. I guess startup1, choicescript_stats1, and dream are the ones you made, right?

You can delete everything else (animal, choicescript_stats, startup, death, gosub, variables, ending) or just move them.

In the end, your scenes folder will have

I hope that helps.

how do I make a HTML index document that when I click on it, it will go straight to my narrative game or if its not to
much trouble can you give me a step by step instruction on how you do things starting from completing scene to where to put it to turn it into the narrative game

@Hazard
You need to compile your game. This link might help you with it.

Another way of compiling your game would be by using the CDE (Choicescript tool for making games), but I would have to post a lot of screenshots showing you how to do it, and it is pretty late where I live, so I’m going to have to do that tomorrow

But here is the CDE thread if you want to take a look at it.

Question: does opening the index html that came with the other files work for testing your game?

nevermind checked out link you gave me

Thanks for your help and your patience in answering my questions as of right now I believe I understand how this works the problem I didn’t click compile nor did I download firefox I did both now.

again thanks for your help

On changing the color of the percentage bars Game Development

Instead of just red, is it possible to have it be green, yellow, blue, and so on? It would add functionality for displaying stats such as health, magic, xp, stamina, etc. Plus, a little bit more color shouldn’t hurt.

This is what CJW said about it:

On changing the color of the percentage bars

You could change the colour of all of them in style. css, but changing them individually isn’t currently possible.

I guess you can, but it is usually not advised

The example game you download with the CS code from GitHub still starts the game with choices in startup.txt.

I understand the bookkeeping convenience of reserving startup for just your scenes, variables, achievements and other admin, but it’s not necessary – I can scroll to the top of startup as readily as I can open a new .txt file.

Actually, I have to disagree (quite a novelty for me where your remarks are concerned, to be honest) as I would always recommend that new users treat startup as purely an “initializing” file, but allow me to expand on my reasons for doing so.

In addition to the basic necessities not permissible in any other CS file (scene list, declaring permanent variables, achievements), if the actual story scripting is properly confined to actual Scene files then the “bottom” of the startup file is the ideal place to easily use for practical purposes. This could range from a whole, bespoke ‘Alpha Testing’ system using both extra / duplicate variables and specific code for this purpose (e.g. http://choicescriptdev.wikia.com/wiki/Practical_Scripting_Techniques) to just being an easy place to experiment with and test new code, because when testing locally it will then always run before it launches into the story proper (i.e. before the first Scene file is loaded).

That considerable practical benefit aside, however, the biggest problem for a new author is getting to grips with CS as a whole. The original mygame.js file had one big plus for ease of newcomer understanding (its sole purpose was to initialize the game), and one big negative (it used a completely different format - JavaScript). The startup file has thankfully gotten rid of the latter problem, but instead now somewhat confuses the issue for some people where the former is concerned - not helped (IMO) by the example game’s startup itself immediately launching into story scripting.

What we often fail to consider / remember, is that a non-programmer newcomer to CS is still struggling to come to terms with all these files at the same time as trying to learn coding and elements of basic game design suitable for a Choice Game. The light bulb first clicks on with their understanding that only the \scenes folder is initially of any concern. It helps to then understand that within that folder there are three distinct file types - startup for initializing your game, choicescript_stats for the Stats screen, and multiple Scene files for your actual story scripting. That is certainly the easiest way to explain it, and that is often the easiest and quickest way to actually understand it.

We really should not be confusing the issue. The sooner it clicks for a newcomer, the better, and the more clearly it’s defined and explained in this way, the sooner it will all click into place for more of them.

@dfabulich: what do you think about revising the example game to encourage the use of startup.txt solely for variable creation etc rather than the initial scene? @Vendetta makes a good point about the benefit of clarity for many ChoiceScript learners; and I can’t see how it would inconvenience anyone who nonetheless decides to start the story in their startup file.

what is the code to do that

Then in your choicescript_stats.txt, above the stat bar:

or the same thing, but shorter:

And in the game where you meet John:

I did what you said

but when I go to stats screen this keep happening

Ah, I didn’t realize you also wanted it to show up as the title inside the bar. (Should have been obvious, but I haven’t used this myself.)

Can you post the relevant scenes or a link to your scenes folder?

Cool. I think the quickest fix is to dump “name_girl.” Instead, have a “name_lorna” or “lorna” stat, which is a string, not a Boolean.