Hi everyone! Thanks for being here, I hope you do stick around

I’ve been lurking on this forum for quite a while now, and have always loved interactive fiction, so I have decided to try my hand in creating one myself… I don’t have any writing experience, still I do enjoy reading, so I’m hoping i can channel that into my own writing!

I would really appreciate any feedback, comments etc. that you feel should be heard, and I am 100% willing to make changes that are necessary, as this story is very dear to me!

English is not my native language, so if there are any sentences that sound strange, please do let me know!!

All in all, I hope I am able to do these people, I’m writing about, justice, and you grow to care for them just as much as I do!

Plot:
Meraki:Calais’ Gift is a story about a baby (you) who turns up in front of a doorstep one night, and grows up to live a seemingly normal life. But as the annual royal festival commences, things appear just the way they always are, until suddenly they aren’t, when a mysterious incident occurs.
You play as a 21-year old trying to make sense of strange happenings coursing through Meraki.

The word count currently stands at 59.2k (excluding code) and consists of the prologue and chapter 1!

I really like the story and it’s a very interesting one. I’m quite curious about the ash and if it’s connected with MC. I like the characters, they make me curious to know more about them

And welcome to the community, Neena.K

Amazing start, I was shocked how quickly I was drawn into the story. The character-building felt very natural, and already I already love Mr. Uncle and Mrs. Aunt.

I think the sprinkled ash is definitely related to the MC, and it seems as if something unnatural with red eyes knowingly put the MC up the front porch for adoptions. Also curious why Prince Calix would know the MC, and there are a lot of intriguing dialogues that made me chuckle.

The MC’s unnaturalness is bleeding through - hints of superior bodily stamina in running and great vision. Perhaps they are not a human at all? Or with latent magical powers still slumbering deep?

Love it! Looking forward to more!

Definitely a good wip in the making. I’m gonna watch this one

It definitely catched my attention. Really liked the story so far. Can’t help to feel that we are connected to the ashes in the beginning and the royals as well. Over all a good story.

@Queen_Zelda Thank you for reading!

I’m really glad you like the characters!! Do you have any favourites?

(I’m already working on a lot of writing and editing, so I can’t wait to post more!!)

Thank you for the warm welcome!!

@Veraynea Thank you so much!

i was quite anxious posting on here, so that’s made me feel so much better!!

It’s funny 'cause I expected mc’s uncle to be a hit or miss, so I’m curious what exactly you liked about him?

Also, do you mean Miss. Effie?

Honestly, the only person who’s been giving me feedback is my sister, so it’s quite interesting hearing all of your theories/suspicions!

Thank you for being here! Looking forward to posting more!!

Very interesting thought… Again, thank you so much for reading!!

@fisheye I’m currently working on a small update, so I will definitely add a short hair option! Thanks for reading!

my favourites are Cora and the prince

I hope you have lots and lots of fun <3

I really enjoy writing Cora and Calix, so I’m glad to hear that!! But I must admit, I didn’t think anyone would have an opinion on mc’s father already, so that’s a pleasant surprise!

I would appreciate any feedback on grammatical errors, spelling errors, coding errors and awkwardly structured sentences.

I hope you enjoy the little bit of extra content! I’m excited to hear your thoughts, so please do share!

I just finished the demo, and here’s a little more

! I really like it so far, and I’m looking forward to some more. I think Cora is going to be a great friend, and that guy in the hallway… some definite RO potential!

Here’s a small typo, should be “here”

And here’s an error I found in the game, while making your way to Cora and Atlas 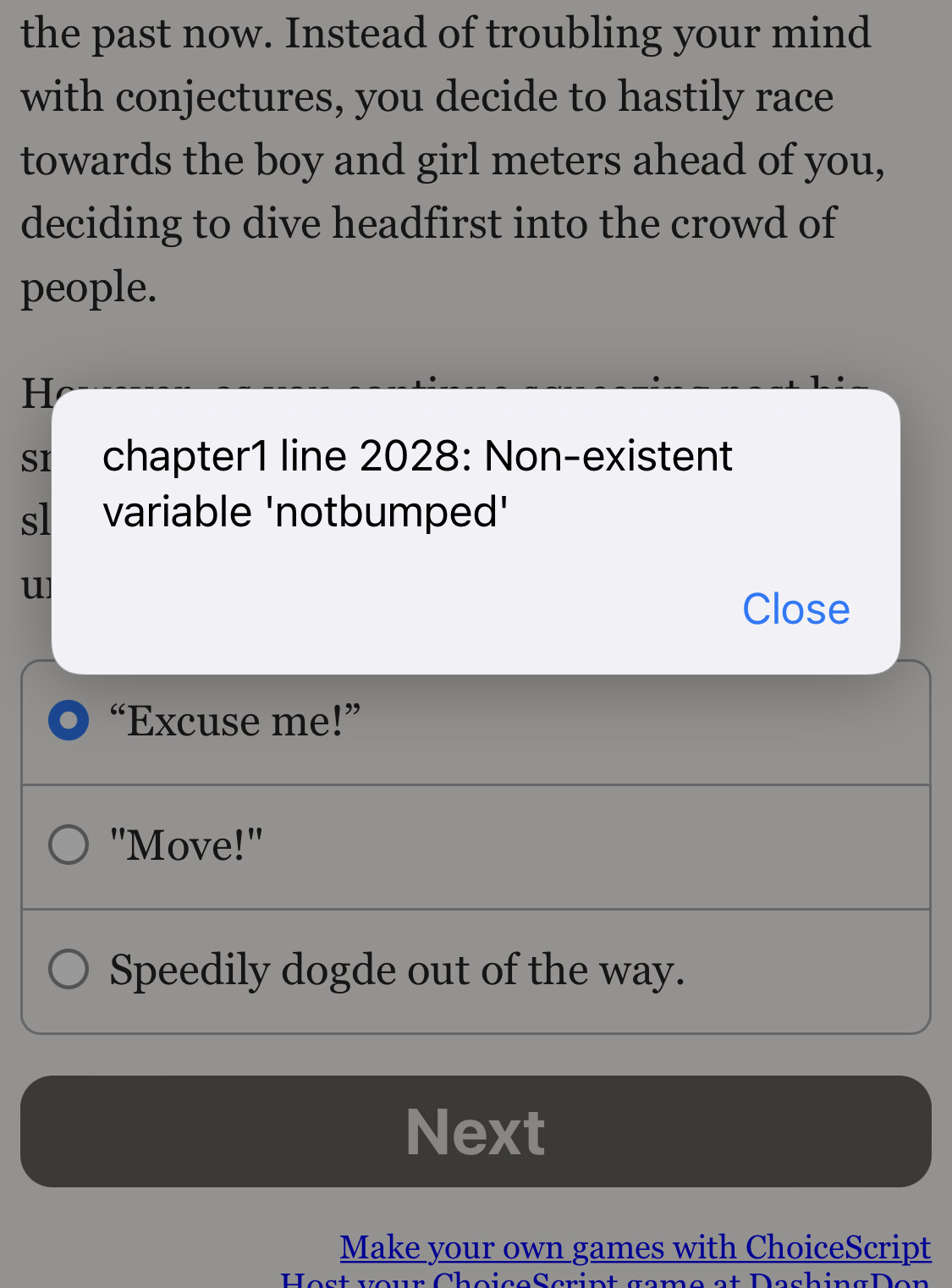 @Anna_B Hi, that was quite quick!

I was actually very nervous about how Cora would be perceived, seeing as she’s meant to be mc’s childhood friend but as of now it’s looking pretty good, which makes me super happy cause I do really like her character!

Also, thank you for letting me know of the errors! I just realised that I didn’t upload the new startup files so it would probably be best if you try to close your current tab and click on the link again!

I love the update, great work on that

What I’m interested as well is the animals in the sky (I had the otter) is it our partner in crime/our magic pet in the future? That would be so adorable

I love the update, great work on that

Thank you so much, this means a lot!!

Aw, I’m glad! That’s an interesting thought, 'cause he’s a pretty quiet/closed off person, so I also think he was caught completely off-guard

What I’m interested as well is the animals in the sky (I had the otter) is it our partner in crime/our magic pet in the future? That would be so adorable

That would be quite adorable…

Can we be evil?

Can we be evil?

Well, you’ll definitely have the chance to go against the grain…

Thank you!!! Should be fixed now!

have the chance to go against the grain…

But what does it mean?

Just from the name, it feels like it’s gonna be a good read…let’s get ourselves readyyy​:grin:

Yes, you will be able to do so!