Lost to the Moon (WIP)

I’ve begun work on my first game Lost to the Moon. You play as an emissary from one of three origins in a fantasy/ 1940s flavored world where faith is centered around the elements and elemental gods after the goddess of life passes. In an established world with complex racial state divides, the region where the character lives is attacked by black monsters who emerge each night. You have to travel to Kobalt City, the center of technology, knowledge and treachery, to try to find aid for your people. The Moonscourge has already taken your old life from you, what else will it take?

Currently the game’s total word count is 23,000 words and this just includes the introductions and a very shallow dip into the first chapter. I plan on trying to update it roughly once a month.

-play as male, female or nonbinary
-Choose to be a runaway from a mountain city defying marriage traditions or an exile of the last indigenous people on the continent or even the exciting life of a farmer in a provincial town!
-Seven possible romances (3 men, 3 women and an extra romance opposite your gender)
-Befriend a immortal weapon of mass destruction
-Wield elemental magic by pledging yourself to one of the living gods
-Influence other people’s relationships, ruin people’s lives
-You shape your personality, characters react to your personality
-And more

This is just me throwing something I’ve been working on out there. It’s not really a demo. It’s not very developed yet and I am inexperienced with making interactive fiction so please give me all of the feedback.

I am also doing my best to make the game inclusive so please help me as much as you can on that because I am disclaimer not non-binary or lgbt so I am just doing my best. I want it to be an enjoyable experience for everyone as much as I can make it.

Yet another promising story to add to my ever growing TBR it seems, gods they were right ill never actually get through it.

Very intriguing. You have my attention. I like what I’ve seen so far but I’ll wait till more is avialible before I can give a solid or any meaningful feedback. But definitely on my bookmark list. So

till next content update keep up the great work.

I haven’t gotten to deep into the demo that you got so far.

I would suggest implementing a save system for testing out the demo choices especially when you get deeper into the story.

There is a few other things noticed that at least in my opinion that could use some slight adjustment because of word usage.

On that note I enjoyed what I’ve seen and look forward to more to come.

Thanks for checking it out! I will definitely be looking into setting up a save system once the project is a bit more substantial

ill sit in my corner where there is very little light, all the while grinning at my screen waiting for the next update.

The story looks promising right now. I really like having the possibility of choosing the MC’s background. And the origins’ stories are fleshed out as well, not just here for the sake of having different stats.

I think I noticed a gender mistake while playing the mountain origins: My female MC was meeting her groom-to-be and as some point he is described as a woman (if I understood the scene clearly).

I can’t wait to read more.

I have similar bug. But Aspen should be a woman here 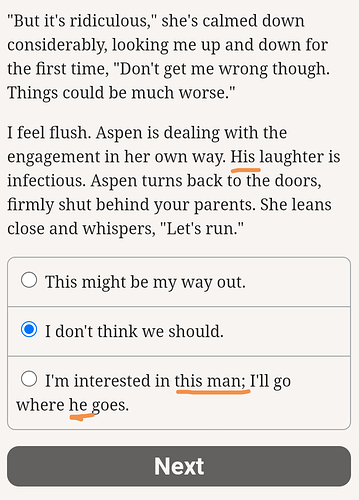 Going to keep an eye on this one. I found the introductions fascinating. I want to read more.

interesting i like fantasy genre will we able to become like a hero or a villain? not in the literall sence but like doing bad things? how long will the novel be if you dont mind me asking?
thats all i hope for whoever read this have a great day and a nice health.
goodbye

iits him not her

will we able to become like a hero or a villain? not in the literall sence but like doing bad things?

Your character will be able to take a path that conflicts with the other protagonists and will be able to make decisions that harm or negatively impact other people. I wouldn’t consider it as “bad things” or evil, but it will be in direct conflict with characters you might consider “heroes” so that would make you a villain in that sense.

how long will the novel be if you dont mind me asking?

I am not sure how long the final project will be at the moment but as of now I’ve mapped the story out in three acts and a total of twelve chapters.

is here where the introduction end?

The final section here is a very shallow dip into the first chapter, the ‘introduction’ technically ends when your character reaches the city. Otherwise, this is where the story ends as of right now. Thanks for checking it out!

@paige_nse on that note did have some questions / rblings of thought lol how far we talking in the kinds of tech the city has far as comparison to the 1940s is kolbalt city like the capital of this area of the world? Sorta getting different vibes of the nature of the world that makes for a interesting dynamics.
Which is a good thing

but would love to eventually see like a timeline of past events that shaped leading up to current point and how it’s shaped the world.

Wanna talk about this one. Will there be a non-magic route through the story? Because I really cannot see my native boy pledging himself to a foreign jerkass “god”?

Other than that the world seems interesting kinda reminds me of some of the themes of Final fantasy 7,8 and 15 with the cars and magic combo without it being hidden behind a veil of secrecy.

One tech question I do have is…where are the trains?

Will there be a non-magic route through the story? Because I really cannot see my native boy pledging himself to a foreign jerkass “god”?

There is definitely a non-magic route; the ability to use magic is a optional borrowed power as the main character doesn’t have any natural magical ability like some of the other characters.

where are the trains?

There’ll be some more info about transportation tech in the world and there will be transit mainly in the city but for reasons that will be revealed in the story, technology has not expanded much outside of the city.

on that note did have some questions / rblings of thought lol how far we talking in the kinds of tech the city has far as comparison to the 1940s is kolbalt city like the capital of this area of the world? Sorta getting different vibes of the nature of the world that makes for a interesting dynamics.

Kobalt City is the biggest city in this part of the world although the country it’s in, Nyx, shares the continent with other countries. There is a very vast divide between the advancement of technology in the City and the rest of the world that will be explored in the story. It also has greater historical significance that will explain why it has a wide mix of different faiths and is a “center of culture” to the world.

would love to eventually see like a timeline of past events that shaped leading up to current point and how it’s shaped the world.

This was really good so far in my opinion! There are a couple spelling errors but that’s bound to happen with drafts and they’re barely noticeable.

"Then Flora should have remembered to pick it up if the first place.” The if should be changed to in, again very small mistake and not a big deal at all.

Other then that, your work is super promising. Personally I really enjoyed the read, I find your writing style refreshing and enjoy the way you’ve written the family dynamic so far.

You’re doing really amazing, mad props to you and wish you the best for the rest of your writing journey. I’ll definitely stick around waiting patiently for more.