Infimus is a supervillain RPG where you do crimes, mutate your body into new and improbable shapes, pet walruses and upend the existing superhero-led world order for fun and profit. It’s about changing yourself while being both clay and sculptor. You can become the universe’s strongest, smartest or coolest supervillain while wrangling a varied cast of like-minded superpowered bastards and reconciling with the fact that, no matter how high you climb in the Hierarchy of Shapes, you will still be a colossal mess.

Updates every Saturday with devlogs every Wednesday.
Latest update:

Infimus Major Update #2: Noise Art Play it here! https://dashingdon.com/go/8686 Work with another team of supervillains! (they don’t exactly have a very high opinion of you) See someone get wiggled very, very hard! Like, really hard! Quote: “I will make your dad puke EYES out of his MOUTH!” Fight the world’s most glamorous superhero! Embark on an obligatory dream sequence! This update took a lot more time than I thought it would. I feel much more confident in my ChoiceScript skills now, and…

12/08/2021 - DEVLOG #11: Archetypes And Reputation It’s no secret that a large part of this game’s mechanics were inspired by Disco Elysium’s various RPG systems. Skills with weird names and weirder descriptions instead of your regular charisma, strength, intelligence, and so on. Dice rolls behind a lot of interactions, which can result in hilarious failures. Self-contained bits of story and lore that have gameplay implications once you’re done with them. Disco’s systems worked for the kind of…

Patreon: Joseph Ferrante is creating interactive fiction, games and other things | Patreon
Twitter: https://twitter.com/gferrante31
Join this newsletter to be notified as soon as an update comes out: https://infimusupdates.substack.com

This is my (hopefully successful) attempt at making a videogame which lets you play a compelling, deep and interesting supervillain character in a well developed setting with equally well developed characters. Saw there really wasn’t much like it around, so I decided to try my hand at it.

If there’s any bugs, subpar writing, or any other issues with the game, let me know. 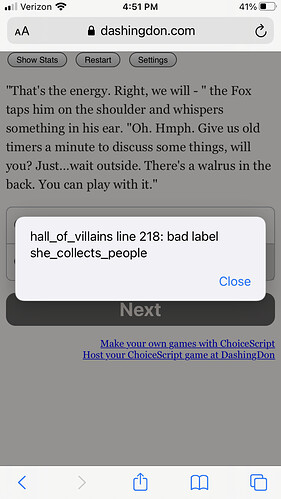 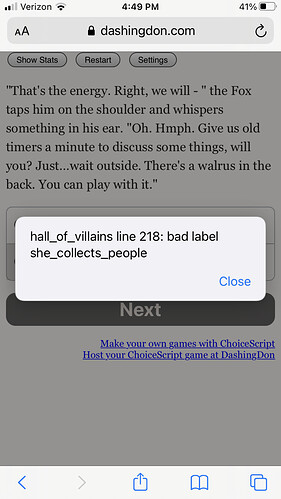 You had me at petting walruses.

This was a really good demo, and I’m interested in seeing where this is going!

This is going to be a weird one, count me in!

You had me at petting walruses.

You and me both.

will you got me hooked

“You want to protect the world but you don’t want it to change. How is humanity saved if it’s not allowed to… evolve?”

I wrote *goto instead of *goto_scene and that crashed the game, cutting off the last third of the demo and your encounter with one of my favorite characters. Oops.

Sorry y’all. Should be fixed now.

I can’t see the stats?

Stats aren’t implemented just yet. But I’ve uploaded a blank stats.txt scene because dashingdon crashes if you click on stats and there’s not even a scene for them, so that should work.

@Hector_Lopez That should be fixed in the version I uploaded just this minute. Sorry for the inconvenience.

The errors that are happening in this particular scene all seem to be indentation bloopers. They probably aren’t aligning like columns in the raw text, which can cause things to go loopy when nesting a few different layers of choices.

Yep, that’s it. Think I’ve rooted out all of them, but I’ll give that scene another look after lunch, just to be sure.

Also I’ve fixed an issue with pronouns not displaying correctly. 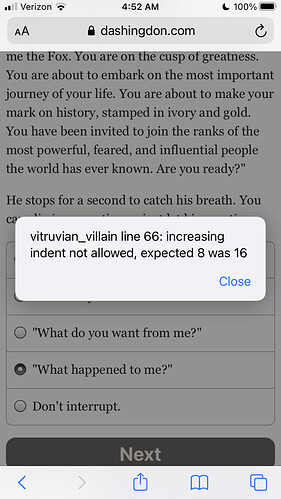 There may be more in that scene

Got it, fixed. Thank you.

I really like the plot and the immersion and world creation. Those are the structural pilars holding up the story.
However, the plot felt a bit rushed at certain places like when after discovering our masked identity V calls out our name or like during her interview the last part about working together.
Really love the friendly banter and humour Olaf brings into the mix.

Thank you, fixed it. Verve knows your name because you told it to the Fox in front of the whole Hall, and she was present. I should’ve made it clearer, in hindsight.

Mmm, I’m not happy with her instantly asking you to work with her either. I’ll probably move that to a scene later on with her.

Yeah I agree but mostly I meant regarding the pacing. Taking things down a bit slow. You provided a perfect example yourself -

I’ll probably move that to a scene later on with her.