Episode Interactive (Other games that are not cog)

Hi all I’ve had the chance to play a game called episode. And was wondering if anyone else has played it😊

Just the name Episode? I mean, I’ve heard games divided into episodes, but no, nothing like that. Now I’m curious though, do you have a link or something?

@Andy31 This post isn’t very helpful. If you’re wanting to speak about this game named Episode a more descriptive thread title would be useful. Also a link to the game and an explanation of what you enjoyed about it. That way the post actually contributes to the forums.

I’m going to change the thread title for you. (But feel free to edit it to something else if you prefer.)

I take it you’re speaking of http://pocketgems.com/episode-interactive/ ?

So I did a bit more poking around. It looks like they not only support, but are also encouraging user created storylines. No payment options for doing so though.

Anyway, Andy, do the games have any sort of GBLT content in them?

Wow! @FairyGodfeather, you just continue the awesome help. Thanks!

I followed Feather’s lead and did some digging around of my own.

The app uses a “fremium” model to encourage purchases. The user is given a number of “passes” upon starting the game, which are used to progress the story. Once the reserve of passes is depleted, the user is given the option to purchase more passes or wait around 4 hours to receive free, handout passes. On the Itunes/Apple version, the user receives 3 passes every 4 hours; I’ve read consumer reviews stating Android users only receive 2 passes every 4 hours.

What’s more, there appears to be a “premium choice” feature, which allows the user to purchase “choices” that lead to unique story branches or produce more desirable outcomes. I have not come across this option as of yet; that may be a good thing, 'cause I already have a distaste for this app and finding those premium choices would only make this rant longer.

All I have to say about this “game” is No. No. No.
The art is quite attractive, but the freemium model is downright lowdown.
For starters, the consumer is given 2 “save slots,” which are used to allow the consumer to explore different outcomes resulting from making different choices. To unlock the third save slot, and any others, the user must pay $4.99.
There is no way to backtrack to previous episodes without starting a completely new game in a new save slot, meaning you’re 100% committed to the choices you make without any do-overs.
Even worse, the save slots share your reserve of passes, meaning you will be expending passes to progress through episodes you have already seen.
There is no method of eliminating the “pass” system nor is there any option to purchase the benefit of making a story completely “pass-free.”
Either pay up or wait 4 hours to progress through 2 episodes.
(Which take about 3 minutes to stroll through.)
And, if you want to replay the story after you’ve completed it, pay up or wait 4 hours.

I had a chance to play Real Hollywood, a story offered by the app.
The player character begins Real Hollywood, in a dance club. The PC engages in conversation with a presumed friend, which leads to the first choice in the game.
The PC is asked what type of beverage they’d like and are given the following options:

My reaction to that was:

Jesus Christ, for a game that is designated for a 13+ audience (strangely enough, the app is rated 12+ in the Itunes Store), that is mindbogglingly not-exactly-family-friendly.
(The game does advise viewer discretion upon the start of an episode, however.)
Admittedly, I am not quite that shocked at the choices given, as the PC assumes the role of Ella, who has her own history and, apparently, taste in drinks.
Also, this choice does play a critical role in conveying background information for the story. Ella apparently got drunk at a party (drinking the user’s choice of drink, no less) and hooked up with some guy that some chick was into. Said chick vows revenge and, five years later (seriously, 5 years? That chick has a vendetta. For real.), she enacts her plot for revenge.
It’s a shame that I can’t stomach the freemium model; I’d otherwise be interested in what this game has to offer, silly as the premise may be.

The game does give tools for the user to create his or her own stories to share with the community. There does not seem to be a method of monetizing these stories - unless a person applies for a job as a Video Game Writer or a Comic Book Writer.
Good luck on that, though. The bar is set pretty high - did I mention that the job is a contract position?
There may be some hope for users to get paid for the stories they create, however, as PocketGems claims to be “exploring a variety of partnership options that may apply to those works published and promoted as featured stories on the platform.”
I might fool around with the built-in editor and see how it works, but I’m afraid that I’d find “premium options” that I’d have to pay for if I wanted to include them in a presentation.

As for the closing note on this app, I’d say run for the hills and don’t look back, but I don’t want to portray myself as being overbearing on this little object of intrigue.
The app isn’t that bad, and actually has a few positives worth mentioning, such as… …

Thanks for your investigative work, Packet. That’s definitely not the sort of story I was expecting from them. I’d imagined something a lot more teen friendly.

I actually find various ways of implementing the freemium model interesting. Not interesting enough that I’d actually try out the games though. Are they at least well written?

It took me five minutes to complete one episode, so… yeah. I’m pretty sure that the more you progress, the longer you have to wait to play. ( it once took twelve hours for me to play the next episode…)

Thanks for your investigative work, Packet. That’s definitely not the sort of story I was expecting from them. I’d imagined something a lot more teen friendly.

I actually find various ways of implementing the freemium model interesting. Not interesting enough that I’d actually try out the games though. Are they at least well written?

Sorry for the delay in getting back to ya; I fell asleep at my keyboard.

Are they at least well written?

This is a static screenshot from Real Hollywood. 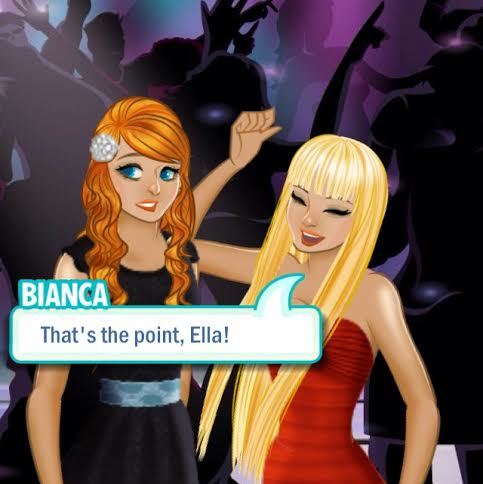 The art and visuals are fantastic, and the animations (not shown in the screenshot) really bring the characters and environment to life. The plot itself was rather silly, but I found myself entertained nonetheless.

It’s a shame. I wouldn’t mind playing a few of the stories on Episode, but freemium model is pretty cruel.

Not only do you share “passes” between save slots, you share passes through ALL stories.
It cracks me up, because Episode encourages players to replay stories by use of the save slots.

It’d take you weeks to finish reading the longer stories - unless you’re willing to pay, that is.

So it’s more visual-novel-esque? How does it compare to other visual novels?

So it’s more visual-novel-esque? How does it compare to other visual novels?

It’s not too shabby, but many other visual novels simply have more depth, features, and lasting value.

I’ve wasted my money on episode when I wanted to continue the rock story one but the stories themselves well they lack the support of me actually continuing it I’ve only completed the ShipWrecked one. Even so it took so long and it wasn’t worth the wait. I think I spend $15 for like 40 free passes and then the game updated and I lost all of my passes I contacted them explaining what happened but never got a response.

I’d say contact them again. Post on their forum as well. Because that’s awful that they’ve taken your money and then not actually responded.

$15 seems expensive for this sort of game, especially when buy a nice amount of Choice of Games instead for the same money.

It had something to do to the passes it was like $2 for like 4 passes and individually or in bulks. I’ve used I think 5 passes before the game updated and I’ll have to try and get a refund if I can but I think it’s been a year since I’ve made that purchase.

Hi, everyone! The game is called Episode Interactive, and for the people who play Episode Interactive, I got a cheat: First you go into the game, then when you have 0 passes left you click on the episode and then it comes up that you have to wait for 3 hours or something like that and under that it’s written ‘‘Refer friends’’, click on that, then you have to go to settings, set the date 1 day ahead, then go back to the game and close the site ‘‘Refer friends’’ then you have 2 passes

When you used up those 2 passes then repeat!

I’ve played the game episode many times, and have had the game itself for a while, it has some good LGBT content in it, sometimes the games that you can play with it are a little harder to find but they are there, the game is very good, the only problem in my opinion is the payment and ticket system, you have to have tickets to play the game, so either you wait like an hour to play like one episode which takes maybe ten minutes, or you spend a bunch of money on tickets and blow them all within a week, bad payment system but the rest of the game is pretty cool

It’s not that bad all the time, and it’s always the same amount of time you wait to play

Theirs a different game that is a lot like episode but is much better formatted, however instead of being a bunch of different story’s you can play it is one long one, basically an interactive book with animated characters, the formatting is a bit different but I find it quite enjoyable, and you do use passes but you only have to wait 30 minutes and you have two passes and the episodes are much longer the game is called “love island the game” and has a great plot where you can chose your own path, it has LGBT content in it too, I’m a girl and I play it but I’m not sure if there’s a different mode for guys to play, I do quite enjoy the game and think it’s worth checking out (btw it’s based off of a reality tv show)