Dating sim- trying to figure out how to go about it

So, I’m currently working on a dating sim but I’m not 100% sure on the direction. The one I’m working on now has a huge emphasis on online dating, but as i go through it, especially in the beginning I feel people might just get a bit bored.

Now, I’ve also have a project on the backburner, the same thing except it’s more action-orientated- as in the player goes out and gets things done, rather than just sitting and messing on a dating site (the goal being to work your way up to meet the person in real life and go from there). The more I work on the dating site one, the more I want to flesh out the old one.

What do you guys think? Is this something that you would even be interested in?

On top of that- what’s something you would like to see in a dating sim?

The one I’m working on now has a huge emphasis on online dating, but as i go through it, especially in the beginning I feel people might just get a bit bored.

I understand why this concerns you, and I’m curious why you decided to go in this direction. I mean, there’s nothing wrong with it, it’s just unusual to have a computer game where the MC spends the majority of their time on the computer… It’s like… If a writer wanted to create a fantasy game, but instead of just writing a game based in a fantasy setting, they made a game where the MC is a school kid, playing a fantasy RPG on their computer.

Now, I have actually seen things like this done really well. One game I played was set completely online, and the player would have to do things like check their friends “tweeter” and “fakebook” profiles in order to find out more about them. It could be difficult, but I definitely think it’s possible for the whole “online dating instead of face to face” thing to make the game more interesting instead of boring, if done very cleverly.

Honestly I’m not 100% sure why I decided to go in that direction, either. Maybe that’s why I’m feeling so iffy with it. I’m sitting here and now and honestly can’t think up a good reason. I think maybe I just liked the idea of going through and searching profiles and the interactions that come with sending stupid message and how some characters would react to them.

If anything, I was able to expand what I know about choicescript, and can use it with the other project instead.

I like the one where you eventually work up the courage to meet face to face better, but I feel like you could do both; in the beginning the player looks at profiles and does whatever you had planned for the online part, and then eventually they work up to the meeting face to face part.

I’m actually more intrigued by the concept of an online dating sim because I love the idea of checking messages that seem to “trigger” in real-time, looking at profiles, messaging, etc. I strongly agree with @BigBoss6121’s idea, though, that you could do both: have a period of time where you only message with the people online–as it goes in real life–before setting up a real life date. It opens a lot of character-building possibilities: for one thing, why has the MC stuck to online dating? Are they shy, and only a certain amount of actions/a stat check like “courage” or “charisma” can enable them to go on a real-life date? What if they meet up with the person in question and they’re a little different from their online persona? It could be a really cool meta game!

I think this could be really fun. I actually really like online dating. I don’t just mean that it’s a fun/easy/relatively safe way to meet people. I actually enjoy winking, poking, swiping right whatever and getting a response. Or even just waiting for one. Then those first few messages, and the progressing levels of intimacy at a distance.

Honestly I kinda miss it when I’m actually…you know…offline dating someone.

Oh except I hate writing profiles. I’m just never happy with them. I cringe when I find an old one of mine.

All this is to say…I would definitely play this game.

Okay, so I think what I’ll do is a bit of both, online dating but also a bit of going out and meeting people personally. I might not flesh out the online portion quite as much as I would have but still have it pretty present

Why not do both? It would be a hell of a lot of work but you could give the reader more choice and make it to where they focus more on one than the other, or both in equal measure.

Yeah, I think that’s the route I’m gonna end up going. I’ve already got some mechanics set up and I’ve delved into a bit too far that I’m not quite that willing to give it up just yet.

Okay, so I’ve got that figured out and am currently outlining and setting up some code to work in both. While it’s still in the initial stages, my next question is, what is something you would like to see in dating sims? Certain characters? Certain events, scenes, etc.?

what is something you would like to see in dating sims?

I’d like to see, as an option after we get a few initial dates out of the way, to have a “guess date”, wherein we alternate taking each other to various activities around the city or wherever and see if we guessed what the other person would like is correct.
For characters, one I would want would be an office worker, and after we open up with each other we can have options like surprise office gifts or dates, helping our SO in the workplace, say if our charisma or intelligence is high enough to find ways to help them, etc

Dating someone with a child. As a single parent it’s something that might be a nice change of pace

I actually have that planned. Just the one character, but it’s in the cards!

I know you’re going for a more modern and realistic approach to dating…but when I think ‘dating sim’, I think of the old PC-98 games. True Love is the classic dating sim and it’s free to download. It might be worth checking out just to get a feel for the tropes of the genre. It’s pervy Japanese highschool anime stuff, but the gameplay elements (like keeping track of dates) could be applied anywhere.

I think the best approach for a dating sim is to come up with a list of scenes that could cause drama. They could be misunderstandings, secret affairs, crazy ex’s, family issues and so on. If you focus on the drama the romance will sort itself out!

So one thing I have in mind is the use of skills. I’m thinking Cooking, athletics, etc. I figure I can have it to where you have to work on your skills, and doing so can open up some things like if your low skilled, home dinner for your date might end up being a grilled cheese, as a high skill opens up to do a nice lobster dinner. Or going out with a character that loves the gym- you could end up wheezing after the first minute, to keeping up and impressing.

Any suggestions for other skills?

Any suggestions for other skills? 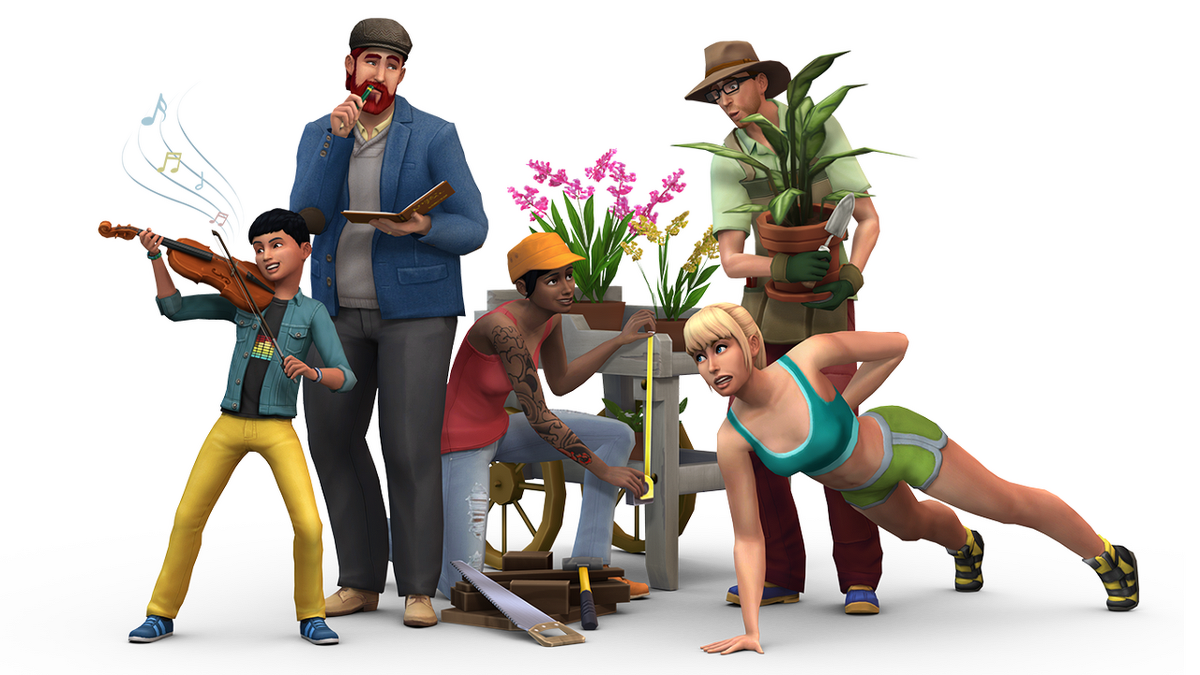 Skills are talents that Sims need in their everyday life and to advance in their working career. In The Sims, only adults can earn skill points. In The Sims 2, The Sims 3 and The Sims 4, however, any age group from toddlers on up can gain at least...

Haha, I guess I should have thought of that

I know you probably have already started but you could make the online dating game comedy related. I’ve also noticed that most people who find dating sims awkward usually like the ones that don’t take themselves seriously. But this is just a suggestion.
Also for a skill, i know its technically not a skill but social could work.

Nectar-making? Mixology? Mischief? These are all going in my game.