Crown of Mirrors - Play as the Mirror Shard, the chosen one!

My name’s Matheus, but y’all can call me Matt and I go by he/him. Some of you might recognize me from my other WIP, The Abyssal. I actually started working on CoM at the same time I came up with the idea for The Abyssal, but only recently this project grabbed my attention, again.

The Abyssal it’s still being worked on, and it will continue to be my main project, so rest easy haha.

Now, let’s get on with story, shall we?

Crown Of Mirrors is an interactive high-fantasy story where you get to choose how your own adventure unfolds. The story is set in a medieval and dystopian world where several magical and non-magical races populate the sphere of men, also known as the world of men or Ada. You are a powerful magic wielder bound by a prophecy with no chance of a happy ending.

You can find me on Tumblr, where I answer many questions about the story! And on Patreon, where I post bonus content and artworks of all my projects.

As some of you might already know English is not my first language. If you find a typo or if the pace of a scene is a little off, please tell me so I can fix it! And of course, any suggestions and ideas of any kind are very welcome. ^^

I love Abyssal!! Hoping this will be fantastic as well

It’s good so far. After choosing one magic, are we gonna be stuck using only that magic or can we be able to use another? And isn’t there going to be a stat to regulate how weak or strong magic is?

Awww why can’t we play as the animal race

Just a couple pronoun errors I saw both at the bottom of the pics. I know it way early but I figured I’d throw them out there for you. 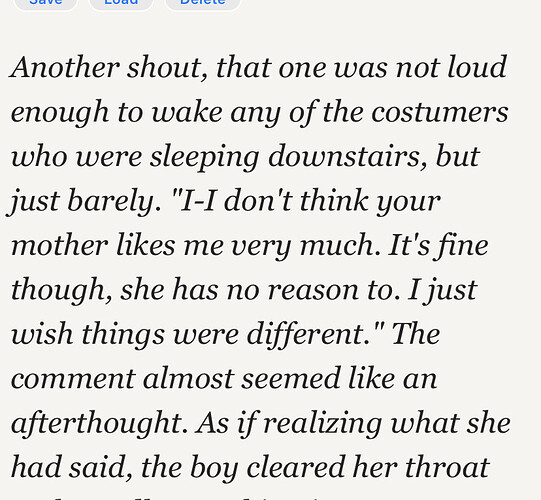 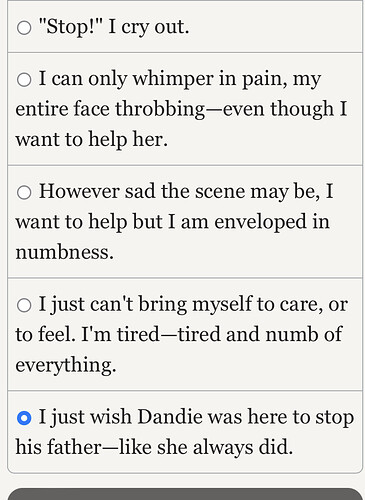 I haven’t read the demo yet, but I absolutely LOVE the idea, and all the RO’s. I’m going to check it out late

Even though I know it’s just the prologue I can tell that this will be just as great as your other if and I can’t wait to read more of it. As for feedback I guess I’m having the same problems everyone else on this forum is having with the loop at the end.

I’ll take a look after I get home today!! Thanks for pointing it out

For right now I’m thinking on locking the use of the magic you choose at the beginning, but as the story progresses and the character gets more knowledgeable they will eventually be able to tap into other magic specialties.

lore question time!!!
Are there half giants or half elves?
And if they exist, are they frowned upon by the elves and the giants? (I mean maybe these questions will be solved in the demo but I haven’t played it yet, I like to ask lore things before playing

I updated the game, it should be working now!!

Are there half giants or half elves?

Hii, half-giants are almost unheard of and is pretty widely believed that they are not a thing, mostly because the Giants are a very isolationist race, however, half-eyes are not exactly common but their numbers are lower than half-orks. The elves are known to accept half-elves into their ranks and cities with open arms, they are given the choice to receive the gift of immortality or to remain mortal. The gift of immortality is only possible thanks to their elven ancestry though.

Why do turture me so😭 lol. The animal race is my favorite race and I can’t even play as a half-kendred😭. That sucks that I can’t play as one😔. their hard to come by. for some reason the elf, dworf, ork, and halfling races gets used a lot leaving giants, demons, dragon, and beastial races so it’s cool to get a different veriaty. But why can’t I be a kindred😭? Love the wip so far😁

Read Dandelions description and was like sweet, then saw the fur and mane stuff. Can’t do half animal romance lol feels to weird, especially when I look over and see my cat just chilling next to me. Also them hating/disliking us for being a mage when its the only thing that saved us from their pos father rubs me the wrong way.

Also will we be able to hate being the royal mage and having to work for the Emperor/Empress?

Pretty sure the current demon only has Human’s Prologue at the moment, and the next one is Elf’s prologue.

I also found A LOT of D’s pronounces mistake yesterday, has they been fixed?