Okay so I am writing a love making scene between the MC and his love interest and of course I want to be as vague and discreet as possible so my question is what is acceptable to write? like how detailed are the authors allowed to be before potentially getting told off.

Are you looking for specifics (e.g. whether certain phrases are acceptable) or do you mean in general?

Fade-to-blacks are always a safe bet, if your goal is to be as “vague and discreet as possible.” Just insinuate something of the sort is about to happen (e.g. “the LI leads the MC to the bedroom”), then time-skip to the next morning or smth.

Maybe the better question is, how explicit were you hoping to get?

If you were looking for examples of published sex scenes that arent super vague, Heart of the House has one for each RO as does Magician’s Burden. Wayhaven Book 2 has one for 1 RO as does The Soul Stone War. I believe Werewolves Havens Rising has them…these arent the standard fade to black scenes that I can think of off the top of my head. oh also Jazz Age and All.World Pro Wrestling are pretty explicit

Just in general, maybe to give the reader some idea of what’s actually going on so if during a fight scene if I just fade to black or be too vague then it would lead to confusion.

There have been discussions about this topic before but only Adult Readers can view them (which I’m retroactively realizing is a bit of a problem in itself if others can’t see these discussions):

Some excepts from the threads in case you can’t view them:

tl;dr Make a toggle so that it’s easy to turn off sexually explicit content, and that should cover all bases.

Other published authors have written explicit sexual content before. You could ask @GreekWinter if you’re curious.

Your biggest hurdle when publishing mature/explicit content will be the app stores (i.e. Apple in particular). You can ask @MichaelMaxwell what hurdles he had to face when publishing his story on the Apple App Store.

So in other words, as long as there is a warning and it is not too obviously explicit you still can get published with some mature contents in your hosted game???.. I do remember readers mentioning the sex scene with M in TWC.

Basically yes. I would check with the publishing staff of CoG to make sure if you have any specific questions regarding the content in your game.

I can’t speak to how explicit you can get when it comes to publishing your Hosted Game–speaking to the staff is the best and most efficient way to find that out, as well as using previously-published games as a good guidepost–but here are the rules for what adult content gets marked as explicit here on the forum, necessitating a separate “Adult Content” thread for your WIP. This could be a useful benchmark for writing your content:

So the thing is, whenever I do write something, there has to be n*ked, sweaty scenes. Not having smut in books that I write is like having ceral without milk… So I was wondering, (overthinking) if explicit content is alright. I know there’s an adult section but how explicit can we get? Because I already finished the prologue (not coded as yet)and well… It’s very um… Visual. Clears throat knowing myself there’ll be lots of those scene…

I moved your post here as the links posted in this thread will be useful reference points on this topic. In particular once you have a demo up, it will need to be posted in the Adult Readers section if it has explicit content.

Welcome to the smut corner lol there’s only a few of us… I would say you can get pretty explicit when it comes to sex scenes as long as it doesn’t depict sexual violence and other No no situation… Just make sure to read the link posted by rinari to get a grasp of what’s allowed.

I would say the final decision will be in the hand of Hosted Game as always because they might ask you to change or edit some stuff upon submission of your IF in case you plan to publish your game.

A good rule of thumb is to add a toggle like the below that way you can keep readers away from scenes they don’t wish to read. (Which also mean that you’ll have to write two version of those scenes.) 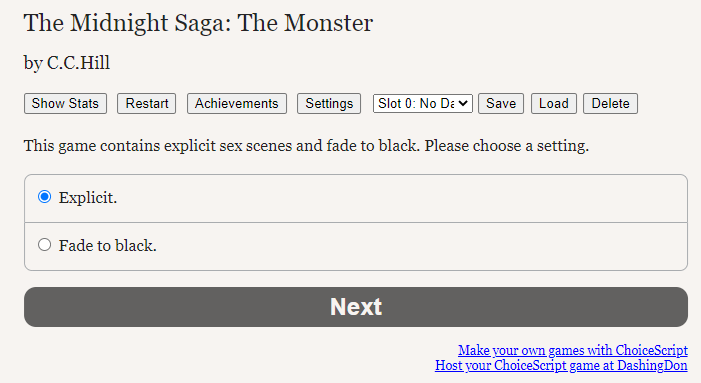 Published game that I know contain explicit sex scenes. All Pro Wrestling. A Kiss From death, and Samurai of Hyuga. Maybe try reading them to get an idea of what can be published.

All pro wrestling was awesome. Honestly it’s my most read book on the hosted game app. For samurai of hyuga… I did read the first two books I liked them and everything but I was upset when the ex came back and wouldn’t leave my mc alone that really ticked me off. Oh! The other book I’ll have to check up on.

So far, I don’t know I had to readjust my first chapter because in a way most people would view that chapter as s*x without consent. Ah I’m rabbling. Look at this… Please ignore the so called coding that’s there. I’m horrible I know. Haha.

“First mission? What first mission are you talking about?” You asked, while pointing on that specific line.

“Do you wish to see the save file?” The robotic voice asked monotonously. This thing has really been getting on your last nerve. First you were tossed into some unknown world, and now apparently, you did something you weren’t aware of.

So I’m aiming for two versions but I don’t know the first thing to write for the fade to black.

That’s good. Because you need to give the MC the choice of opting out of such scene because it can be triggering to some. But if that scene is a crucial part of your story and can’t be avoided, a warning content and and a fade to black setting will be a must.

The setting of fade to black you have coded so far seems clear enough.

Fade to black varies in way of writing them I would say there is no wrong way.

What I personally do while writing mine is to include the kisses the touches, the soft caresses, and soft shove against the wall (all based on choices that MC made) then instead of adding anything further I would finish the scene with some corny lines like:

“Mars…” you moan her name, but Mars doesn’t stop and continues to pleasure you.

The thing is, you don’t want her to stop because you’re ready for your bodies to join as one.

Just a quick question MC is 15? How old are the ROs?

Ah yes that… The age. So the thing is, the MC transmigrated into the body of a 15 year old. The soul of the MC is older though, I was thinking about increasing the MC age seeing as I have an/a NSFW scene.

The ROs will be in their late and early twenties. I don’t want a huge age gap. But one of my ROs puzzles me alot. The content that I want to write for him wouldn’t, fit his age?

I need balance. I have another question. Do you copy and paste after writing an NSFW scene?

Another question, without coding how much/many words is usually in one chapter?

The below is from google, in IF the word count per chapter is totally up to you. Don’t worry too much about that.

Do you copy and paste after writing an NSFW scene?

I try my best to make sure that each RO’s NSFW scene is different from one another. I copy and paste codes and maybe the choices that MC need to do, but I don’t copy and paste the same dialogue or the progression of the scene if that makes sense.

For example one RO is more rough then the other so his scene will not be the same as the one that is more sweet.

From Google:
From these numbers, we can establish some guidelines: the average word count of a chapter typically falls somewhere between 1,500 and 5,000 words , with 3,000–4,000 being the most common sweet spot.

I’m new to coding. So I haven’t started coding as yet because of that. I’m currently writing my WIP like a normal story. Do you think me doing that will hinder my writing progress?

I’ll make it a bit longer then. Honestly I had only two thousand words written without choices.

Also how exactly does one go about writing for different genders, do you like do one gender at a time or all of them at the same time?

Do you think me doing that will hinder my writing progress?

Do what suit you best. everyone writing process is different. Me I write my endings before even writing my beginning so if what you’re doing works for you, keep at it.

I will say that 2,000 word without choice is too much. Try breaking that down in increment of 200-300 words per page and add some dialogue choices or reaction choices even though they don’t branch out.

Wall of text without choice are discouraged in the IF world

Also how exactly does one go about writing for different genders, do you like do one gender at a time or all of them at the same time?

Write the part that you know, and for what you don’t know research research, research. Google is your best friend. Also, alpha testers are a must and a blessing.
You can make a post asking people to test your smut scenes before the demo goes public to get as much feedback as possible.