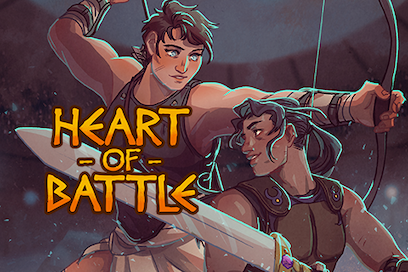 Battle for love as a gladiator in this epic romance of swords and sandals! As a prisoner of Coritan City, you had two options: rot in a dungeon or battle in the gladiatorial arena. You chose to fig…

Battle for love as a gladiator in this epic romance of swords and sandals! Win glory, victory, a better life, your freedom—and spark a revolution!

I’m absolutely overjoyed that this will be coming out soon! Even if I wasn’t unashamedly biased because of being married to the author, I’m just in love with the combination of grit, high action, and intense emotions. I haven’t actually played through all of the romances yet and I’m so looking forward to exploring this world and characters again!

I am dying to get it to see @FayI Improvement in the relationship writing as I think is where there are more potential for improvement. But Fay is already a immense writer.

Looking forward to it. I’m curious how well the Hearts Choice brand does in comparison to the Choice and Hosted games. I LOVED Freshman Magic (I think it’s one of my favourite recent CoG games) but it seems like it would be very easy to edit it to the stage where it could be released as a Choice game instead. Do Hearts games perform on par with Choice games?

I don’t know about performance but the way Hearts Choice games are structured is a bit different to Choice of Games titles - for example, romances are guaranteed to be Happy Ever After or Happy For Now whereas in CoG titles that isn’t a given. Some titles (though not this one) are gender locked or sexuality locked which doesn’t happen in CoG. It’s not a hierarchy between CoG and HC, just a different approach and focus.

Romance is also the key element of a HC game with the plot being a backdrop for the romances rather than existing in addition to the plot. From watching Fay create the game from the outside, she was always focusing on showcasing the romanceable characters whenever they appeared and making sure they had plenty of screentime, and making moments feel emotionally weighty.

This game really combines everything masterfully - there is high drama with a really strong romance thread simmering along throughout. I’m so so fond of it!

I have been waiting to snap this game up, since its announcement.

It would be hard to overstate just how much I love this game. I was sucked in completely before the end of the first chapter, and it just got better from there.

Every character is a gem - not only the love interests, but the side characters and even the antagonists. There are good people doing their best within an evil system and villains you’ll love to hate. The ROs are all deeply flawed - sometimes infuriatingly so - yet beautifully and profoundly lovable. Even the one I didn’t feel any connection to at all at first won me over in the end. And they’re all very different - there’s someone here to suit nearly every reader’s fancy.

The story takes place over the course of several months, and it’s nice to see the romance unfolding at a realistic pace. You get to decide what heat level you’re comfortable with, and both intimate conversations and sexy times are written with elegance and warmth. It’s also possible to develop a platonic friendship with any of the ROs, and friendship is treated with the same dignity as romance.

The plot combines some genuinely exciting action sequences with heartfelt relationship development (not only romances and friendships, but alliances and rivalries) and some of the heaviest thematic elements I’ve ever seen in a romance novel. I hope that people who don’t normally read romance won’t automatically shrug this one aside just because it’s from Heart’s Choice - it has a lot to say about courage and justice and freedom and priorities and power both institutional and interpersonal.

I could ramble on all day about how much I love this game, but for now I’ll just say that, as much as I loved beta testing this game (and as much of an honor as it is to have my name in the credits of this masterpiece), I can’t help but envy everyone who gets to experience Heart of Battle for the very first time this week. And knowing that Fay Ikin’s next project is set in the same world has me starting my day with a smile on my face, a spring in my step, and a thrill of happy anticipation in my heart matched only by the excitement I feel at the prospect of playing Heart of Battle again.

Yes, been waiting for this to come out for a while! Gimme them gladiator hunks!

Ah! I loved this game in its beta version, I am so incredibly excited for its release!! Congratulations, you’re a talent to be sure

Okay, having played the demo now I only have one slight reservation. I played as a prisoner of war in my first play through and it felt like I was being rushed to play nice with everyone way too quickly. I get that it’s a romance game, it’s just with that backstory combined with the ability to be a vicious bastard there seemed to not be a lot of options to play that character, instead I felt I was being pushed to be nice. Especially when it came to Petra. This is someone who is actively working with my captors. I wanted way more chances to treat him with active contempt. Not just weak call outs.

Don’t get me wrong, I’m still buying it the second it comes out, just my two cents worth.

Ayo a hearts choice game that has both pick your gender and the RO gender AND an interesting premise?? Hell yeah

So hyped for this! Can’t wait for everyone to experience the full story when it’s released. (Is it weird to be hyped for other people to play a game? xD)

Also looking forward to hearing about that next project! I would love to see another foray into the world of Heart of Battle.

Is it weird to be hyped for other people to play a game?

I can’t say whether it’s weird or not, but it sure happens to me every time a game I tested is released. This time even more so than usual. I can’t wait to see what everyone thinks about the plot and characters!

Got an error- 7_riot line 1536: invalid @{} variable substitution at letter 17
.
I also clicked the link that says it reports the error, thought it might be faster to report it in two places.

I just marathoned my first playthrough in 3 hours, and it is undeniably the best Choice of Games story of any franchise that I’ve read in a very, very long time. I’ve never had the experience before of being presented with four love interests who are all so distinctly different from each other, and yet whom I all still want to romance. Plus, I very much second @AleitheiaKnights’ point about this being a surprisingly thematically-heavy story - there’s a lot of social commentary expertly woven in and a lot of hard-hitting questions about what our choices really mean, or what the right thing to do really is. And those questions don’t really get explicit answers, but considering how massive they are and that this is a choice-based where what you choose does the answering, that felt very organic and satisfying. All I’ll say is, I’m already looking forward to replaying

I really enjoyed the story and all of the decisions there were to make and also like that my character Tharion, didn’t really feel forced to make a “right” choice and could even keep to himself and just focus on being a fighter when he wanted even though he was noble by the end. Same with the romance aspect and how I didn’t feel he was forced to be tied down really. Also Tharion turned down every option he had to escape but I like that there were alot of options and offers there with the reputation he had built. Lots of choice!

I did run into an issue and don’t know if I technically even finished the game lol .In chapter IX when I had to make a choice with how I felt about my position like wish I would have escaped or whatever, I chose an option then got an error. 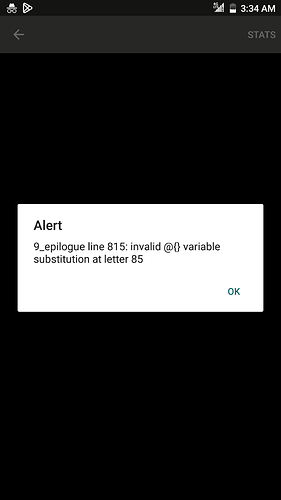 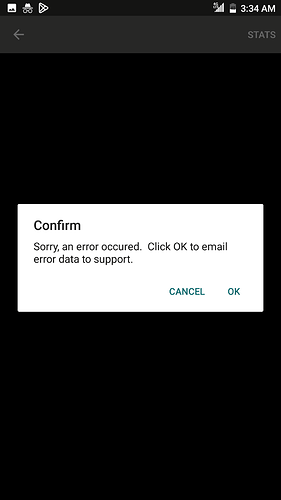 I sent the email, but also thought I should bring it up here still.

I have spotted that and when the next version is posted that specific bug will be fixed. Thanks

I’m glad you enjoyed it, even if the ending was more abrupted than planned, haha!

No problem! The game was well written, characters and all and i’m happy to support that with my money. I plan to do more playthroughs with different characters, but i’m glad my first one was really fulfilling and now im looking forward to more of your work in the future!

Just for general reference - the best way to deal with an error you find in a published game is to report it to support@choiceofgames.com, preferably with screenshots or any other information you can provide about the circumstances in which the error occurred. I can testify from personal experience that reports submitted that way are seen and acknowledged in a timely manner.

Posting about it here is usually not particularly effective. Some authors rarely or never visit this forum. Most CoG staff don’t spend a lot of time here either, and certainly they can’t read every post, so there’s a pretty good chance any error reports you make here will never even be seen by anyone who is in a position to solve the problem. If you’ve already sent an email, there’s really no need to post here too.