Win duels and hearts as a swordswoman at Paris’s finest luxury brothel! Fight for the honor of ladies of the night in this game of swords and seductions. Belle-de-Nuit is a 107,000-word inter… 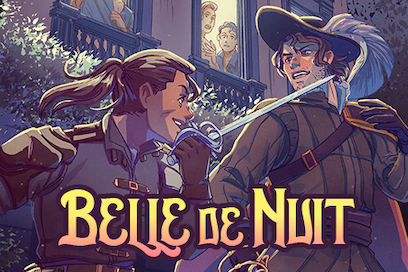 Win duels and hearts as a swordswoman at Paris's finest luxury brothel! Fight for the honor of ladies of the night in this game of swords and seductions.

What a lovely demo! I’m already in love with both Amaryllis and Sebastin. Can’t wait to buy this!

Neeeeeeeed… I need it…

Many thanks to the author (and I loved never date werewolves).

This looks gorgeous, the writing is sharp and funny and it’s absolutely dripping with atmosphere! I’m so looking forward to playing more on launch day!

I really enjoyed the first part of this. I’ve always loved the duelist concept, and it’s executed immaculately.

Unfortunately, the scene where you have to seduce Sebastian was so uncomfortable with a gay MC that I had to stop reading. It may just be a personal thing, though.

More about that scene under the cut:

I strongly agree. I know the argument’s been made on another story that a gay woman can “flirt” with men (be it to manipulate or whatever) without being attracted to them, but it doesn’t make it any less awful to sit through, especially when it’s a long, painfully drawn out scene like here. It doesn’t help that we can’t specify our sexuality, so it always has the assumption that you might be into the prick instead of having the character hating it just as much as you do.

Good to know I’m not alone, then!

Going through an unavoidable scene where the MC is deliberately presented as a sexual object for a man was…uh, not pleasant. I thought the beginning was fine because the MC is clearly resistant to the plan to pose as a courtesan, but everything after that started setting off alarm bells in my head.

I’m sure a lot of people could flirt with someone they weren’t attracted to at all if they forced themselves to, but like you said, it would feel gross.

There is a mistake in the interview “There is an interesting gap there, where Louis XVIII has died, and Louis XIV is too young to rule”. It should be ‘Louis XIII’ and not ‘Louis XVIII’.

We’ve pushed a patch to the demo. Please try now.

I really enjoyed playing the demo. I can’t wait to play the full version soon!

Yes, the added option makes that scene much more tolerable. Thank you! I’m really glad this feedback was taken into account even this close to release. In the first page of the next chapter, though, I did get a bug where the game thought I slept with Sebastian.

I’ve got a question. Will the born place of mc have some impact on the story?

I got too, even though my MC d8d sleep with him

There was this bit of text which clearly is wrong. When Sebastian and his master go to the Belle-de-nuit, there is a moment in the conversation where things can escalate.

I refused, replying I was there just to talk, and next morning when I wake up I see this:

“And there is, of course, the night of his visit itself. M. Denjeux and Sebastian are none the wiser, but you remember the taste of Sebastian’s skin, the tang of sweat against his lips, the warmth of your two bodies gasping against each other.”

Unless it was a weird dream, that didnt happen.

Not for the most part. You get some different paragraphs near the beginning with Jacynthe if you’re also Chinese though.

Aghhh I could gush about this for ages tbh, and I’ve just played the demo. Can’t wait to play the full thing when it releases in a few hours

This is great- I love the positive and safe depiction of sex work, and how it’s the right fit for some people, not for others, and it’s no shame either way. I don’t often see truly sex work positive works of fiction, and this might seem like a low bar to some, but even fiction that DOES include sex work doesn’t seem to understand more nuanced things like issues of the actual worker’s consent to acts.

I love that the Belle-de-Nuit is a haven for so many people who struggle to fit into society, I love that it’s a found family situation (best trope of all time imo), where the workers all respect and look out for one another. It’s already full of memorable characters that ingratiate themselves to the reader in a fairly short amount of time. And the romance scenes are engaging, I’m excited to see how certain relationships develop.

We got that bug fixed for release. Thanks for reporting it.