Hope this isn’t off bounds to post here, but I wanted to see if others could verify what I’m seeing. A few CoG games are showing up on the PC version of the Google Play Store as suddenly having dozens of new 1-star reviews in the last few hours, lowering their aggregate score considerably.

The weird thing is that it only seems to show up on the PC version, while the Android version of the Play Store doesn’t show the bombs. I tried 3 PCs on 3 different browsers each and replicated it perfectly every time.

Werewolves: Haven Rising, Choice of Magics, and Stronghold seem to have all dropped significantly in the last few hours, especially the latter two. I don’t see how that’s possible without a concerted effort to review-bomb.

Choice of Magics in particular went from an average of 4.5 to 4.0 in one day. That should be almost impossible with 772 reviews.

The bizarre thing is that I can’t replicate these PC store numbers on the Android store, which acts like nothing has changed. Can anyone verify this?

dunno what is this bombing thing . But went for ‘Newest’’ …and this is what it show to me for choices of Magic . 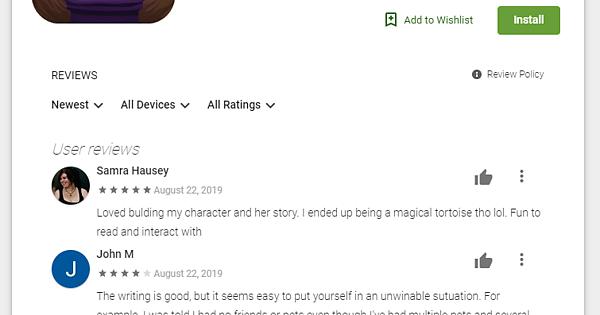 That’s so weird. It’s the exact opposite of mine.

Thing is, this is not normal. I’m absolutely obsessive about watching review scores of my game and the games that came out around a similar time. If these drops are real, they represent literally hundreds of 1-stars in a single day.

@E_RedMark Ratings without written reviews have been hidden by Google for some time, so they wouldn’t show up there. You have to look at the aggregate score and the colored bars in the screen before the one you screen-shotted.

Can confirm this issue isn’t present on steam, if anyone was wondering if this crossed over to different platforms.

This is what I’m seeing on my PCs for Choice of Magics. It was 4.5 yesterday, and the bar for 1-stars (the red one) wasn’t nearly as long. It’s either a glitch or an absolute ton of 1-stars all at once. 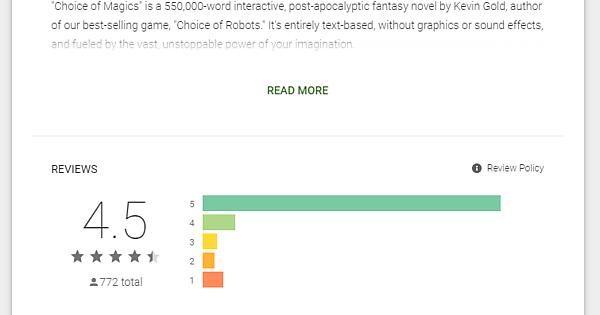 Hmm, maybe a really weird glitch then? SheaMcD said they saw a 4.0 too though. Thanks for taking a look. Maybe the Play store is just having a rough day. Hopefully it’s a glitch.

Also one thing, if it wasn’t a glitch ? I think that number underneath the 722 would have changed . As well as the others numbers . For exemple, the red bar in your screenie is bigger then on mine…but both say 1 . Thats not normal . And that should be your clue .

Well, the red bar would be bigger if there are more 1-star reviews. Those bars are ratios, showing the number of ratings relations to each other.

But the important thing is that the 722 is the same. That suggests a glitch, yes. I agree.

If it makes you feel better, The Magician’s Burden has been victim to more gradual review bombing. All of the reviewers with bad reviews of the game have gone and updated their reviews to be more critical or to give even lower ratings all at once. This brought TMB’s rating down from 4.3 to 4.1, and it made most of the most recent written reviews very negative.

Definitely seems like a concerted effort to me. Likely from one of the pirating sites who hate me for calling them out.

AppAnnie’s only showing one negative review for your game over the last week. Wouldn’t surprise me if google has done a region regorganise or something like that. I find my games have sometimes jumped or dropped by a point or two without any obvious change in the number or type of reviews. On the other hand sometimes written review appear and disappear (and sometimes reappear) so I wonder if it’s a region re-organise or something. Who knows with google. When it comes down to it, whether it’s google or review bombing, nothing that can really be done about it I would think.

Same deal with choice of magics. There’s a couple of negative reviews but certainly not heaps of them recently.

If the neg reviews only happened today, they probably won’t be up on App Annie (I think it takes about 24hrs), but the review scores already seem to match what you’re saying without factoring any new reviews in the last few hours?

I’ve been surprised by some fairly big changes in the number of reviews recently. No idea why, I thought they only affected me but clearly not. Anyway hopefully things will return to normal soon…

I think it might have to do with Google’s new app rating algorithm. Lots of developers reporting rating hits.

r/androiddev - Google Play has started rolling out their new rating system. What...

Yeah, that’s what I turned up last night too. Here’s a few good news links about it: 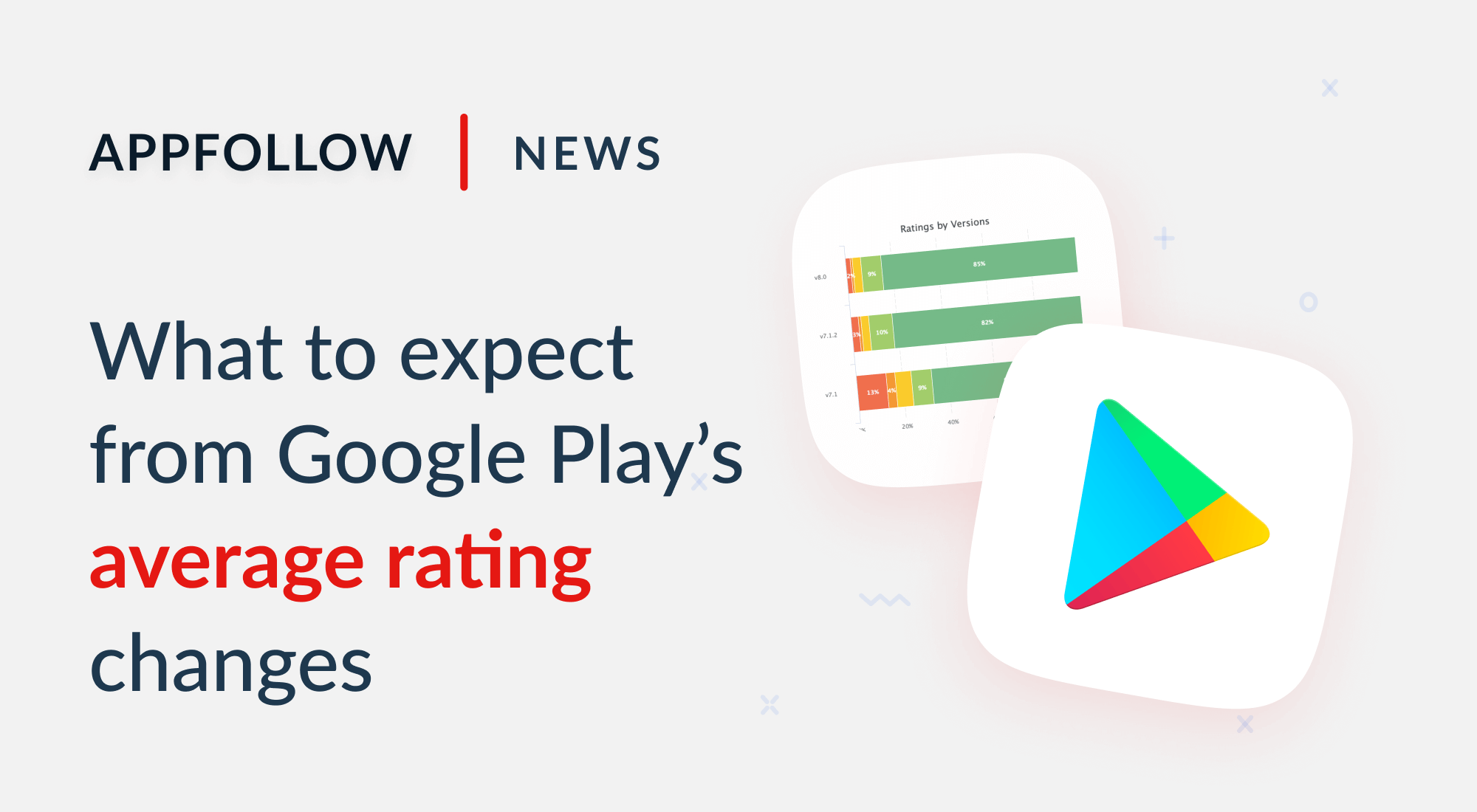 Changes to Google Play average rating: how to prepare

At this year’s Google I/O conference, big Google Play changes were announced around how app ratings work. Here's what you need to know.


The strange thing is, I don’t think most of the data tracking sites know how to deal with it. That or Google is shifting things around in real time as they play with their new algorithm that’s screwing us all over.

Here’s some data screenshots from AppAnnie showing how the ratings are changing drastically and improbably every hour or so:

As a simple reader, Is possible that changing my review and then return back five stars again helps you and other writers here ranking?
Because I have no problem do that to help writers here out or even Make a campaign between the fans to do something like that on mass to help Cog and Hosted.
.I know ratings are a real impact on the revenues and publicity and google shouldn’t play with that.

I don’t know if it would help or not, but it would be worth a try! Thank you for offering!

We should know for sure because maybe is worse… When We have cleared what Is what I will call the masses. Or something lol. I mean the only we could do is give our votes … I have voted centuries ago when game was released so I don’t know if changing that will actualize or not…

This is complicated as hell.

Yeah, it’s really confusing and distressing, but at least we have an idea now what’s causing it.

Google really needs to get itself together, because according to the data I’m pulling (pasted above), their manipulation is drastically changing numbers of ratings in ways that can’t possibly be explained by the new algorithm.

Example: From 2am to 7am tonight, my app somehow went from 31 1-star ratings to 62 1-star ratings. But at the same time somehow my 5-star ratings dropped from 650 to 534? None of that makes any sense whatsoever.

Because I have no problem do that to help writers here out or even Make a campaign between the fans to do something like that on mass to help Cog and Hosted.

This could easily lead to Choice of Games being kicked off Google Play Store. Please stop plotting and freaking out over their review algorithm.