I got a game breaking error when after helping the healer I said we were friends, something about the yesfriends variable.

Issue has been fixed, thanks for catching that!

That was extraordinary! Simple, neat and thrilling!
The pacing was profesionally done.

Much obliged, I hope you’ll keep an eye on this in the future

Only question is that the option to agree when Illya says she could kiss the player was unavailable to me. Is it not just there on the current version or is there another reason for that?

Is that he supposed to be MC?!? But my MC is a female…

Really sorry about this. It’s been fixed. @Ixion_Xenia has the right of it–the first three chapters were written when my understanding of Choicescript was still abysmal (Well. More abysmal than it is now, at any rate) and so the pronoun functions weren’t coded in yet. I used a male MC as a placeholder in the meantime, and now I’m really paying for it.

Thank you for catching this one.

Only question is that the option to agree when Illya says she could kiss the player was unavailable to me. Is it not just there on the current version or is there another reason for that?

There’s a relationship check there! Eventually I want to make it so that you can still select it, but Ilya rejects you; I haven’t gotten around to writing that bit, though. For now, it’s just greyed out unless your relationship with her is at a certain value.

For reference, the easiest way to get Ilya’s affection over the line is to agree with her plan during the bandit encampment episode. It will also increase proportionally according to how many kids you managed to save from there.

Fixed now, thank you as always for the catch!

By the way, I’ve taken the liberty of making a tumblr for the game! I’ll be posting minor updates on the game (read: non-demo updates) over there, and you can also use it as a platform to ask me anything about the game!

Tumblr can be found here: https://a-mage-reborn.tumblr.com/ 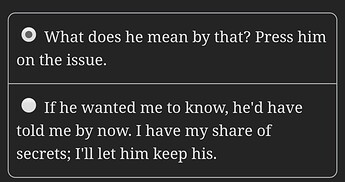 The game is AMAZING!!! The plot is really interesting! I can’t wait for the next update. Thanks for sharing this wonderful game, dear author <3

Pretty good game concept. I do like it a lot. It’s quite different from a normal action-adventure and the MC reliving memories from the alter is quite a neat trick!
I do however think that Eli’s death could have prompted more reactions on the MC’s part when he’s recounting his past to the RO’s, like the part when his arcana manifests(the wording there was simply epic)
A couple of errors :

Also I encountered a page repetition when dancing with Ilya in the banquet.
Great story with a captivating plot, and I can feel it building upto an awesome climax! Keep up the good work

I’m liking it so far

Goddamnit, I love it!
Small bug:

Sister is always Altinier regardless of your last name, I’m fairly sure.

Thanks everyone for your lovely words! They really keep me motivated to write

Indeed, it was a fake choice and wasn’t meant to give out a different response. The hope was that it would communicate Saine’s wariness on the subject, hence his preemptive escape from the conversation without even giving you the chance to respond. I’ve added a couple lines to the dialogue there that I hope better reflects this.

I’ll definitely look into implementing this, thanks for the suggestion!

Also I encountered a page repetition when dancing with Ilya in the banquet.

Sadly, I can’t identify why this might be the case no matter how hard I squint at the code. Haven’t been successful in recreating the error, either.

Will keep looking into this.

@Isabella_Taylor is right: Sister’s name is actually fixed to be Altinier no matter what your surname is, because in reality you were born into different noble houses. You developed a siblinglike bond (some twisted version of it, anyway) during your captivity, hence you referring to her as ‘Sister’.

All other errors not mentioned here have been corrected accordingly. Thanks for your feedback!

Looking into this one!

can you join Sister or the ones that resurrected you?

oh… it makes so much sense now
I replayed it just now and it was so much better than the last time.
I was missing a good chunk of text. Meaning the whole ball and Julius death and I was so confused.
But now it is so good. Also all the pronoun errors are gone which helped a lot with immersion. I look forward to the upgrades . Also on how the story will continue. Because right now I can’t picture my mc ever doing something that justifies being burnedon the stake. Respect for going with a predetermined ending in a choice game. I am intrigued

can you join Sister or the ones that resurrected you?

The short answer is yes, but with reservations. The long answer is difficult to get into without spoilers–I’ll be able to answer this question in full pending the next update.

I was missing a good chunk of text. Meaning the whole ball and Julius death and I was so confused.

Shoot, I was really afraid that that’s the case. I accidentally uploaded a test build of the ball chapter (one that also modified MC’s gender to male), which skips over…basically the entire chapter lol. Thanks for giving it a second chance! Glad it didn’t disappoint you

In other news, I’ve also uploaded the game’s first devlog up on tumblr! It features a teaser of content that is not yet implemented in the demo. Very angsty, kind of spoilery. My favorite scene to write so far, because my literary tastes are very much informed by AO3’s angst tag. Check it out if that’s of interest to you!

Sister is always Altinier regardless of your last name, I’m fairly sure.

I’m enjoying this like , a lot
question
can you specify the age of characters and the MC ? I’m guessing they’re somewhere in their 20s since Saine’s stated as a teenager (and not a RO thankgod)

can you specify the age of characters and the MC ? I’m guessing they’re somewhere in their 20s since Saine’s stated as a teenager (and not a RO thankgod)

Sure can! MC is 19 at the start of the flashbacks (Leaf End chapter), 20 when they join the White Fangs (Ilya: 20, Leon: 21, Saine: 15). 1 year until they get to Sienan, an additional 2 years until the execution, a year’s timeskip until MC is resurrected. So for the main story that puts our cast at ages:

(So, um, if Saine being an RO squicks you out, F probably isn’t for you. :’) Saine not being an RO has more to do with (spoilers unless you did Saine’s option in the banquet) me wanting to have an aroace character as part of the core cast, than it does with the age gap.)