A history of the "Choose Your Own Adventure" franchise

This series introduced an entire generation to interactive fiction. I know I’m not the only one here who grew up with these. I read them obsessively around the time of my tenth birthday, and actually tried to write one at some point. 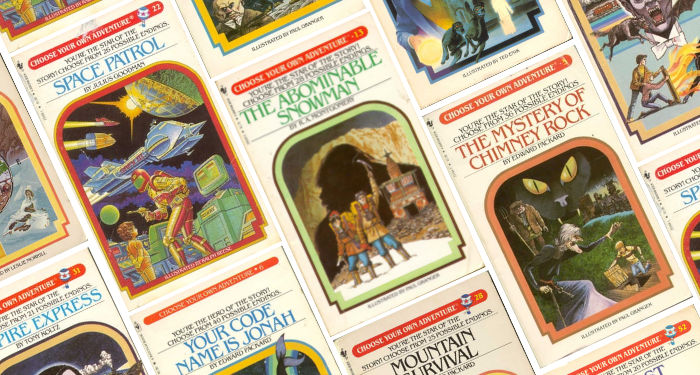 Turn to Page…: A History of Choose Your Own Adventure Books

I can still picture it: my mom taking my brother and me to the library on a Saturday morning to pick out that week’s book stacks. I had just moved from

I’m too young to have grown up with those, so for me it was the Give Yourself Goosebumps series.

Well in that case, get off my lawn, young whippersnapper!

I read many Choose your own Adventures, most of them were older than me. If I remember correctly Poptropica had an island dedicated to a then decades old book. Loved reading em, until we had to read AR books instead, go screw yourself Department Of Education.

Too bad it wasn’t in Spanish

I was born after the era of choose your own adventure ended, but when I did eventually get into those types of things, I was more of a fighting fantasy/Lonewolf gamebook fan

I had at least a dozen as a kid, along with a couple of offbrand ones for properties like Batman and Indiana Jones. I’ve acquired at least another dozen in the last few years from my numerous thrift store and yard sale runs; I’m unable to resist them barring an exorbitant price. So far my older daughter is the only one able to read and isn’t as big into them. Maybe it takes a certain kid to be OK with dying in twenty different (and incredibly gruesome at times) ways while doing their casual reading. I’d say it was an influence in me writing here, but I think that’s pointless to even state. It’s like saying Star Wars is an influence in writing science fiction. I mean, yeah, duh, of course it is. It’s ubiquitous. We’re all still playing in the sandbox Montgomery set up for us.

You aren’t kidding about exorbitant prices. I looked up my old favorite on eBay, one of a series of picture books CYOA made for Disney, called “Winnie-the-Pooh and His Friends.” (I was four when it came out, and Winnie-the-Pooh was my first Grand Passion. Don’t judge me.

Besides, it was one of the few books in the CYOA franchise to depict the protagonist as a girl, which even at the time I thought was pretty cool.) It’s $60 for a secondhand copy. I guess that’s a nostalgia fix I can do without.