Why do you write your stories?

So, I’d like to know WHAT makes you wright your stories what is the purpose, the drive that makes you create these realms of text. If that’s alright. In fact, I’ll start:

Stories are by nature, in my opinion a way an escape! An escape from reality and a gateway into other worlds, other perspectives, to different sides of the globe! Stories are a way to expand the mind and challenge what the audience thinks is possible. To RE-DIFINE what the audience thinks is impossible. That is my goal with this story, and all my stories weather they be fictional or true.

This is my drive. What’s yours?

Growing up I had pretty much no friends or support. The fictional characters in my head keep me company. The simplified reason why I create is because I want to bring them to life, somehow. Characters represent some aspects of the author’s life, and I always find it fascinating. Authors die, but their characters live forever, and therefore a part of them will live forever.

When I was kid, I read Sea of Monsters. That motivated me to try become author. And I have damn many story ideas. Only problem is I really can’t get words in paper.

I wrote a lot as a younger kid to cope with what was probably the beginnings of depression. I was an isolated kid who wasn’t very good at making friends and thus it lead to many, many, hours of daydreaming and writing stuff down in notebooks. Later on I realised I could actually do something with all the ideas I’d come up with and actually started to actively work on my own personal projects instead. Still, to a certain extent, a coping mechanism.

I enjoy imagining things and then writing them down. In most cases, I just played a game, or saw smth on TV and thought…but if they make it like this! Or that! It would be so cool!

What drives me to continue writing (goals?):

I could have all kinds of fancy answers for this and ramble on forever because I love writing for a billion and one reasons, but at the heart of it, it’s quite simple:

I love to read, but authors never tailor make their worlds exactly to my specifications through telepathic or clairvoyant powers for whatever whacky reason! So I try to write it myself and fulfill my insatiable need for more reading material. I hope to entertain others too and bring a smile to their faces. However, when all is said and done, my main driving force and a major intrinsic motivator is my own quest to find a story just right for me to nerd out over.

What others have said is similar, but mostly because I enjoy writing. Even if it’s not fictional writing (i.e. essay writing), it’s an activity I find satisfaction in doing.

I like writing so I can explore issues I grapple with in real life. Like, why do friends fall out with each other, and how can you fix it? Are the relationships we choose better than the ones forced upon us by birth? If we could change the past, would the present be better or worse?

I also just like to write entertaining situations and see how they play out. Writing is explorative AND fun for me.

In many ways fiction is more real than reality. It wasn’t me who said that, it was Tolkien. It is so because stories exacerbate life. They manifest the truths hidden by the dullness of the routine. They contain more life than life itself. They give voice to the silent things.

They make you slow down to appreciate a quiet moment. They drag you through hell. They make you question belief and faith. They make you reevaluate life. They take all hope away and then restore it, more glorious, more wholesome, thriving and with a healthy sheen. The Greeks named it katharsis.

They preserve traditions, modes and cultures as Joseph Campbell realised. Or as Jung would probably say, they let us become more ourselves when we become others.

To make my brain go quiet for a little.

Also, to see people’s reactions, though the latter is a recent development since I didn’t have any way to judge it before.

I really like this explanation. Sometimes you do it just so you will leave yourself alone.

Brutal honesty would dictate I add cheap personal validation through reader feedback and making that cashy money in as reasons too. But the brain one might be top.

For me, because it’s fun to come up with interesting concepts and explore ideas and characters in different ways. I suppose that people vary between whether fiction should act as escapism or confrontation, to which I say a healthy bit of both is best.

As for fan fiction, because it’s nice putting my own stamp in someone else’s play box, even if it’s just for a spell. I firmly believe that we’ll written fanfics are one of the nicest compliments to a fandom.

When it comes down to it, escapism for me too. If I wanted to really pinpoint it, when I was younger (and to this day) every time I consume a piece of media I alwayssss made an OC in my head, and pretended they were also a part of the book or show I was watching (with games I would just add to my character) so that became my draw to interactive fiction specifically. With writing well… I decided when I was like 15/16 that I was never going to be a good artist so I shifted my focus away from art and into writing dragon age fan fiction, which I ended up liking more and thus my desire to write grew from that

Because it’s fun. Because the dialogues would nag, unless you let them out to play.

Because you can make your readers laugh, cry, and forget shitty reality.

Because when you write, you are pouring some of yourself and unburdening your shoulders.

Because it maybe the only skill you have.

Because it may piss off someone you know

But mostly, its cose if I don’t write…I go nuts lol

because if i don’t get at least some of the ideas and characters in my head out on “paper,” i’ll probably go nuts. seriously, it’s either write things out or get nothing done and spend all of my waking hours daydreaming.

that and i love exploring social, psychological, and political themes through torturing my characters.

when I was younger (and to this day) every time I consume a piece of media I alwayssss made an OC in my head, and pretended they were also a part of the book or show I was watching

haha that reminds me of something i did when i was a kid. i still have a novel somewhere that i had gone through and crossed out all of the main characters’ names with the names of my friends (even then i spent way too much time doing nonsense). not long after, i realized that i could just be the person writing the whole dang story instead.

“If you cannot free yourself from desiring passions, read novels and adventure stories, for that is also why writers exist.”

To make my brain go quiet for a little.

Sometimes you do it just so you will leave yourself alone.

But mostly, its cose if I don’t write…I go nuts lol

because if i don’t get at least some of the ideas and characters in my head out on “paper,” i’ll probably go nuts.

“I write and that way I rid myself of me and then at last I can rest.”

“I write as if to save somebody’s life. Probably my own.”

I like writing so I can explore issues I grapple with in real life.

“So long as I have questions to which there are no answers, I shall go on writing.”

It seems, writers are a very consistent species.

Im introverted and have fantasy prone personality and writing is an outlet for my imagination, its very, very enjoyable for me. I use my maladaptive daydreaming to write interesting stories but trying to write more on these stories is the hard part since i’d rather have uninterrupted daydreaming 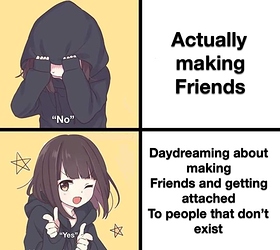 I feel personally called out by that meme.

Because the stories will keep rattling around in my head unless I let them happen. Because the characters want to live and be out there, independently of my own insecurities. Because it’s the only productive thing I can do without breaking down. Mostly though… because it’s fun.