@Avi @rkgk I have implemented a “checkpoint” save system where you can restart every chapter! I hope that makes it easier and more fun to play!

I love the story so far and I love how we have enough choices to build up what we like our MC’s personality to have. Can’t wait for more updates

I was surprised about Melanie and Philip attitude about their biological mother in one scene? It is like they are talking about someone they never met or something instead of their dead mother?

When Cameron insults MC before the dinner I thought a “kind” type MC would have an option to try being nice to her? All four options are about getting angry or insulting her in return.

I edited the dialogue you mentioned to better acknowledge their relationship with Elizabeth and added two new choices for the conversation with Cameron that attempt to deescalate the conflict rather than participating in it.

I hope that looks better; thank you so much for playing!

Is Cameron a RO lol?

Yes, they are! Cameron and Robin are the two romanceable NPCs with a variable gender!

i loved it sooo much

I’m already in looove!! With both the writing and Phillip. If I have to some underhanded things to get him in that throne then consider them already done! Also, my father is precious and I will protect him with my life.

I’m so glad you liked dad - I wanted to make him a source of exposition and an opportunity for you to develop your character without being an unlikeable bore!

Thank you for playing!

I enjoyed this demo so far! I have a some of questions tho:

Are there plans for poly romances or plans of love triangles and jealousy reactions from ROs?Cuz I really want to see Robin’s reaction to the MC talking about potential marriages; plus I’m curious how the heirs would react if they found out their sibling(s) are in love with the same person lol

Also just how progressive is the kingdom when it comes to same sex couples?

Will it be possible to seize the throne yourself and become the ruler without marrying any of the heirs?

I’m glad you enjoyed it - thank you for playing!

I am admittedly undereducated about poly relationships, so I was unsure about implementing them, but they would obviously be “v-shaped” if two of the siblings were involved. I think Cameron and Robin would be the best options for implementing one!

Since you can pursue more than one romance path at a time before making your choice, there will definitely be reactions between them! I think it would be best if jealousy was only limited to the characters whose path you’ve started, so it’s not a mess of annoyance between characters you aren’t interested in.

I plan to make the kingdom fairly modern when it comes to same sex couples, where people might be surprised by it or awkward about it but definitely not hostile. I think there would some flavor text acknowledging it, but nothing major and certainly nothing period-typical.

I’m not sure how many distinct endings I want, but I certainly wouldn’t rule that out! Plenty of the heirs are open for some upheaval!

I hope that answers your questions, and thank you again for your time!

And I also found this for S 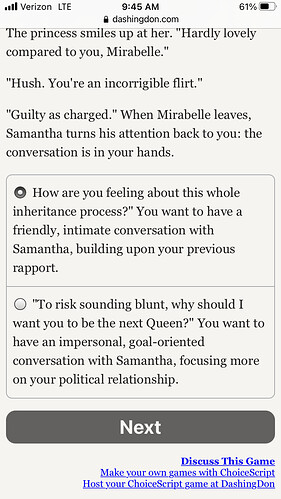 Thank you! I fixed the missing quotation mark for Samantha’s event.

Do you remember where in the story your gender showed up incorrectly, or who said so? I searched through what I have and wasn’t able to find where I made the mistake.

Thank you so much for your time!

Yes at the end of the demo

I really enjoy this IN! Samantha and Robin are my favourite characters so far. I enjoy the MC’s place in the world too, and the story building is chefs kiss

Love it!! My only complain is having to wear dresses…Urgh…dress…

let me get drunk to wear those things lol

Loved it too much that it is equally frustrating knowing that this is WIP.

And uh…sorry for not much feedback. My thought is like:
The father must either have Oswald as an alias or have Casanova hidden in his name.

My MC will never get married[…]

This is such an interesting plot! I love the characters, and how much we are able to customize the personality and thought process of the MC. The only thing I can add as a future-update-advice is having save and load slots, because we will need to replay the whole game at every new update otherwise. Thanks for sharing your story!