Ill try to draw them. Give me a minute. 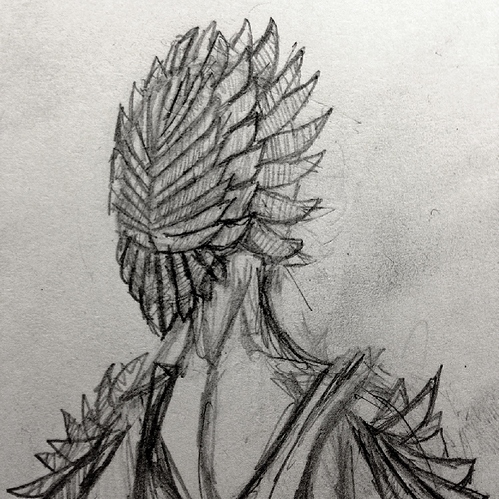 Here’s a small sample of the opening scene

First, came the torches in the night. They appeared down the main road of your village, suspended in the thick night air, bobbing about as if on strings. Members of your village came out of their homes to peer into the dark, asking each other what they thought it was. Couldn’t be bandits, someone said, its too close to the city. Couldn’t be the Black Prince either, said another. Its too far south. The street filled with more and more curious villagers, each gazing at the light as it came closer and closer. Then, in a rare moment of silence, you could hear the sound of horses hooves hitting the mist-soaked earth, and the clinking of metal and wood. Everyone else heard it too. You saw parents herd their children inside, for fear it may be bandits after all.

Then, as the light grew closer and closer, you began to make out a shape in the mist. Coming out of the fog you saw a man dressed in all leather holding a torch in one hand, the other pressed against his side. He wore a wide-brimmed hat, and had a pair of swords strapped across his back. What caught everyones attention however, was the insignia on his chest. There was a white rose embroidered on the boiled leather of his armor.

You have never heard an entire village silence themselves so quickly as your village did that night. The crowd parted ways in silence as he rode between them. Eyes looked upon him with mixture of fear and awe. As he continued down the street, the crowd closed up behind him. When he reached the center of the village, he stopped abruptly. He swayed in the saddle for a moment before collapsing from his saddle into the muddy ground. The torch sputtered and died.

your game sounds awesome, but possibly could be said to be similar to the new dragon age

this is actually more inspired by warhammer and other fantasy book si used to read that Dragon Age.

What really frustrates me is how I suck so bad at coding. I could have a demo up in about an hour, and a pretty lengthy one at that, but I’m incapable of coding at anything faster than a snails pace.

Working on the demo right now, may have a full prologue up and running in a few hours…

Maybe it’s just me misunderstanding, but the idea that I’d only have my companion/s and my personal house guards to call on doesn’t really match up with the image of “unlimited resources”. I’m not saying that I want to have access to all power possible, but it seems like I clearly don’t exactly have a personal army here - at least not one of significance on an empire-wide level.

I love the sound of the personality and all that stuff, though. Companions whose opinions you have to deal with are the only kind worth having (from the gaming POV) - otherwise I’d just rather have higher stats…

But having a loyal friend (or at lieutenant) is twice as fun as going it solo.

@Elfwine
Let me try and put it this way - As an inquisitor, your problems are the kind of problems that can only be solved by someone like you, and maybe with a little help from other certain highly skilled people. Sure, there will be moments where you can choose to take a whole goddamn army and just raze a city to the ground just so you don’t waste the time it takes to find the one person whose death would matter. But you don’t have everything, all the time. If you did, then where would the fun in abusing power and taking stuff from people go? You could pretty much do whatever, but you were trained to think logically. At least for appearances sake.

As for the Knights of the Rose, think of them like “Army on Demand”. You call, they come.

Well, to use your example investigation - just to illustrate my confusion between “unlimited resources” and “the only power you have now is the fear your position inspires” here:

Why am I stuck relying on only my personal guards and (NPC(s) to be elaborated on, aka the companions)? Why can’t I call up the nearest troops that are in the vicinity of Buttcrack-Nowhere (my nickname for any “so insignificant its not on the map” village), or where I am now, and instead of relying on the borderline useless town watch, have a company of the 5th Legion (made up just to refer to something specific) at my back?

I mean, I don’t mind what you described as the situation the Inquisitor faces there. That’s not a problem in itself - that’s a fun and exciting situation to play in, where you have to act smart and tough at the same time.

And its obviously not a good idea to call on the army to raze somewhere to the ground all the time, but unless deliberately playing this to challenge myself (either as a player, or based on my character’s attitude), having my “personal forces” be fairly substantial and supplemented by the best people I can grab in the heat of the moment is pretty damn logical.

I’m willing to wait and see how this looks - I just want to address this to make sure I understand, since this is too good a concept (who doesn’t want to play "ultimate troubleshooter guy?) to be made frustrating for the player by problems over what kind of backup Ultimate Troubleshooter Guy has.

@Elfwine
I see your point. When I mentioned the personal guards, I was referring to what you had available in the immediate vicinity. Perhaps I could pose some moral choices, i.e. you encounter a large group of professional soldiers on your way to Buttcrack-Nowhere, and you find that they are on their way to defend a village from being razed to the ground by bandits. Now you can choose to commandeer them, you might have to kill the CO if he argues for more than two seconds though. You would also cause the deaths of countless people in the village they were originally assigned to protect. But, you would have quite a bit of firepower later on. I don’t want it to be a hassle, but rather a choice of how much absolute victory is worth to the PC.

The concept seem interesting but what do you mean by HONOR, i think your group is similar to star wars mara jade secret hand of emperor spy role. She only have to obey emperor and only respond to him. Nearly unlimited resurces yes, but you have mostly work like spy unnoticed, why have only 99 if you dont are a subtle spy??? If everyone new you are an inquisitor and what inquisitor is my friend you go with a freaking army and thousands to investigate.

I am spanish and study history so i could talk about our inquisition, there are very clever really clever. There were normal inquisition the one who wears the robe the ring and all the stuff but there were few minor groups that actually infiltrate the impious and control nobles, nobody never knows about them they had pope dispense to commit the sins the heretics to catch them. Is like in dragon age leliana job as left hand of divine almost noone knew she was a chantry spy and assassin. She had unlimited resurces but she was limited to be almost alone and not backup. And that have in my hummble opinion more sense that everyone knows you are inquisitor then how in hell you could find heretics?? Then you are a simply army and 99 is not a good army number. Is good for a CIA group but they dont go around saying i am CIA i comming to spy you with my personal army. I mean i dont want sound bad, but i really want to be helpful your story sounds cool, i love use politicians and sly. I love could use persuasion in my beauty seductress to spy. Honor in spy is not the word your job is lying and betray the people you spy honor is not what an empire is looking for, fanatism loyalty and intelligence. Not honor, that is for the army not for spies.

@poison_mara
The reason the inquisitors exist in this world is to give people a reason to be more afraid of the Order than they would be tempted to betray the empire. Some inquisitors never reveal their true status unless absolutely necessary, while others make good use of their power.

Oh so it is like our old spanish inquisition but 99 is really few to be feared my friend 99 could be the secret hand agents and the other another branch of inquisition . I mean if you want use fear as inquisition you could be known as the military order but if inquisitor job is bring down heresy then my friend you couldnt dress a HI HERETIC I AM A INQUISITOR he would run and you never discovered the secret cult. I understand you want player has freedom but maybe he could choose being a military inquisitor or a politician spy inquisitor? That would make more sense. Or a direct spy could fake he is only a order military while a more sly character could choose be a noble a dancer or something more easy to blend sneaky with heretics. Just my thoughs about it.

I would like to do that. The player can choose their style, and the ninety nine are just the Knights of the Rose. They are inhuman, and posses magic capabilities that allow them to cause great destruction. One of them is valued like one hundred ordinary knights.

Hey, no problem at all. Feedback and ideas are always welcome.