This is a design philosophy sort of question.

In my last game, I had “playersexual” romanceable characters. They were each fixed to their gender, but would be attracted to the player regardless of the player’s gender. For example, in Butler, Dmytro is always male, but he’ll be gay or hetero depending on the player’s gender.

The downside of this is that a hetero male or gay female player is unlikely to pursue him.

In my new game, I’d like to make sure everyone has the full range of choices available. So, I’m going to take the tack of gender-swapping all the RO’s based on the player’s stated gender and sexuality.

My question is: How should I handle bisexual players? The best option I’ve come up with is randomizing all the RO genders once the player identifies as bi, but I’m really interested in what other games have done.

Randomization could get a bit confusing, though I wouldn’t say it’d hurt to have it as an option. What I’ve seen most often is for flipping characters to have sort of a “default” gender which they will have if the main character is bi or asexual aromantic (don’t forget those either!).

One other note, it’s really nice when there are romance options who are written as explicitly bisexual rather than just playersexual. It’s nice for representation and feels more consistent too.

In @Cataphrak’s Mecha Ace, you got 3 options: 1) All male, 2) all female, 3) randomized. The default is the third option (which is also explained in-game that it’s better for the first run), but players can choose whatever they want and still able to meet all characters regardless.

And a quick tip: if you do have randomized, I think you want to make sure that the random doesn’t give you all male or all female either.

Let’s see, iirc correctly the answer coming up here and there was:

Look at Hollywood Visionary or Fallen Hero. They give you the choice with each RO, in FH’s case you can go and say to make them all random, too etc.
What I remember better to avoid is tying RO’s gender to the MC’s sexuality, as HR did.

One other note, it’s really nice when there are romance options who are written as explicitly bisexual rather than just playersexual. It’s nice for representation and feels more consistent too.

Good point, though I’m not sure it bears on this from strictly a coding/design standpoint. I’ll be sure to make a couple of the characters always bi and write them as such. It will definitely fit the world.

If you want to approach this in a consistent manner you might want to look at @HannahPS’s WIP, Creme de la Creme, where she allows the reader to choose the gender of the non-player characters.

This, I think, is seen in the Tower Behind the Moon’s demo, where you can randomize the characters or choose. The warning found in the beginning is also pretty well worded, so there is another sample to study.

I have a lot of different thoughts on this subject but I’m not ready to discuss them yet.

Nah, only Ortega is gender definable by the player. Herald is always male, Argent always female, for example. They are to the best of my knowledge all playersexual though.

The Butler Did It ,

Hope it will get that Steam release with Linus Romance! Whoo!

I’m pretty sure I’ve seen a bisexual player who didn’t like always picking RO genders individually, on the grounds that they are interested no matter the gender so it didn’t feel like they had a real basis for the choice.

What’s the problem with making it result from the orientation choice?

I’ll be sure to make a couple of the characters always bi and write them as such.

I’ll check out Creme de la Creme right now. My instinct is not to give the player that much explicit control over the world (it feels like it would kind of break immersion), but I can see how it might be the most practical solution.

I would use “Choice of Vampire” as an example. The author gave 2 characters for you to choose from, a woman named Clotho and a man named Silas. You had the choice to date either, neither, or both. If you were to choose a more complex route and wanted to add more, I think starting characters are the most important. The reader could get to know the characters first, and then they could choose who they wanted best.

That’s what I did in The Butler Did It, with three (maybe soon to be four) characters of fixed gender, who you spent a lot of time with throughout the whole game. It worked pretty well there, but my new project is going to have significantly more characters in general, and a higher proportion of them will be potential love interests.

Nah, only Ortega is gender definable by the player. Herald is always male, Argent always female, for example. They are to the best of my knowledge all playersexual though.

my new project is going to have significantly more characters in general, and a higher proportion of them will be potential love interests.

And cheering you on in your new project!

Gonna try for a WIP with the first chapter this week!

Gonna try for a WIP with the first chapter this week!

Yes, I’ve got quite a large chunk of NPCs in Crème de la Crème who are variably-gendered (male, female, and non binary). You can choose at the start of the game whether you have them randomised or whether you pick a gender when you first meet them.

I know what @Delliot means about immersion regarding control over the characters, it was something I thought about for quite a while as it did feel a bit weird at first. And @Eiwynn did raise in the thread that it could feel overly wish-fulfillment-like under some circumstances. Which makes sense! I wondered that myself when I was deciding how to do it. For me tying gender to the PC’s orientation does feel too wish fulfilment-like for me to want to write it, and there’s the pesky thing of what to do if the PC is bi or pan.

I also considered a Broadsides/Pendragon Rising complete gender swap, which I ended up not doing but could be a possibility if you want clearly defined gender roles in the setting.

I knew I wanted variable genders, mostly for the challenge and to see if I could (also being inspired by the very vivid Tally Ho switchable characters), and also to be able to provide a very wide range of potential love interests for a protagonist to choose between if they wanted. All the romance interests have reasons why romancing them could cause a problem for the PC, but I didn’t want the NPC’s gender to be one of them, you know?

The way I’ve worded it in the choosing-as-you-go method, I’ve embedded it into the initial character description so you have something like: 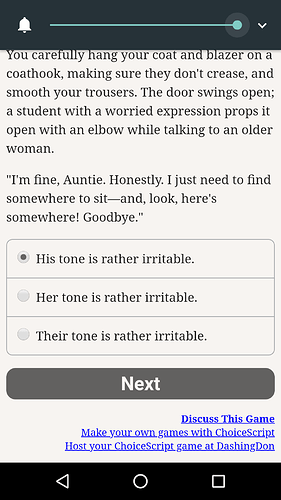 I’ve ended up writing an essay, sorry! I love discussing this stuff and thinking it through, and seeing what everyone else has to say. Anyway, GOOD LUCK with the chapter!

I played through a bit of Creme de la Creme on Dashingdon, and you’ve done the gender selections very smoothly. I can think of other similar ways to slip in the choices too, with people taking off helmets (my game is fantasy), turning around to face you, speaking from behind you, etc.

I’m leaning away from randomizing genders now, after thinking about it in terms of player experience.

If they only play once, then they won’t even know that the genders were randomized, and what’s the point of doing something if the player doesn’t notice? And if they play more than once, then they might be frustrated if they hoped for particular genders and didn’t get them.

I could put a choice up front, but that feels even gamier and more immersion-breaking than sprinkling the choices in as you meet the characters.

So, I’m not fully decided yet, but I’m leaning towards handling it the same way you did. Thanks for the essay!

If they only play once, then they won’t even know that the genders were randomized, and what’s the point of doing something if the player doesn’t notice? And if they play more than once, then they might be frustrated if they hoped for particular genders and didn’t get them.

Good! Also if I were to say get a really unlucky draw with randomized genders my gay mc might find himself with only female ro’s.

I completely second the view on romanceable characters, people just can’t get enough! I think the key thing about gender/sexuality is to keep the experience consistent over multiple playthroughs. One downside I foresee with simple randomisation means that a player could come back to the game wanting to romance Roxy only to find out that Roxy has become Ross - this can be rather jarring!

To be clear, my initial thought was only randomizing genders for a bisexual MC. I wanted everyone to be able to romance any of the potential RO’s.

That’s not set in stone for this particular project yet, though. I am going to have a pretty large number of RO’s, so maybe it’s not a bad thing to lock some of them out of some playthroughs.