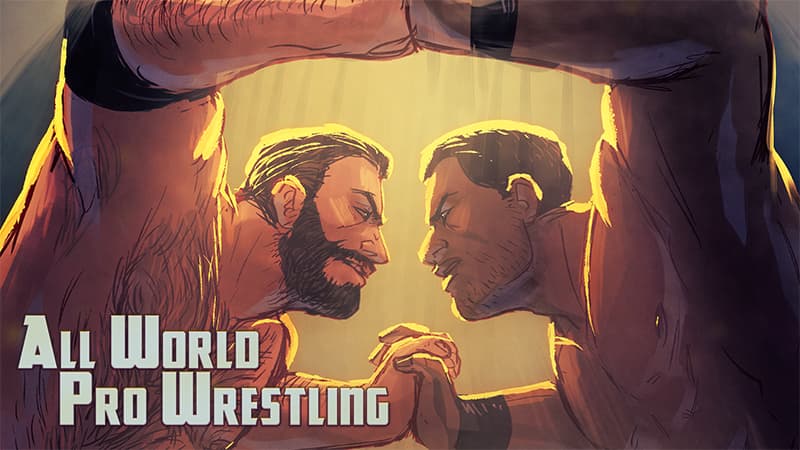 We’re proud to announce that a new special set of All World Pro Wrestling “Bonus Stories” are now available for iOS and Android in our “Heart’s Choice” app, as well as on Steam! “Bonus Stories 2” is a special non-interactive set of short pieces in the world of the game, and it’s on sale for $2.99!

Get into those tight trunks and charge into the ring with three more smoking-hot stories of gay wrestling erotica! See the All World Pro Wrestling League at its best: gorgeous men, tight clinches, flexing muscles, and sexual tension in every move.

Since 2009, the team behind Choice of Games has created high-quality interactive novels in all genres. Now, our new Heart’s Choice label puts romance at the center of the story, and you at the center of the romance. Heart’s Choice games contain no graphics or sound effects, so we can focus on the story. Every game is filled with vivid, fully-developed characters and complex narratives that respond to your choices.

How will you find your happily ever after?

Oh yesssss. Excited for the Sex Fed and Jobber one.

Glad for this new dlc from my favourite heart’s game. Hope it sells well

Where do these stories take place relative to the game? I know in the last set of stories, two took place before and one after.

Just out of curiosity, does anyone know the state of a potential sequel to All World Pro Wrestling? I assume there is supposed to be one, considering how the first one ended with MC getting the contract?

I know it’s an idea that was being tossed around when the game originally came out, but I don’t know if that was ever pursued, or how seriously. I don’t think anyone’s ever said there definitely wouldn’t be a sequel, but if there is one planned or in the works, it hasn’t made an appearance on the Upcoming Releases list for Heart’s Choice.

That said, even if the author was hoping to do a sequel, the game was meant to stand alone. It’s a story about falling in love and/or lust during your time as a rookie trainee. Getting a contract is probably best interpreted for now as a happy ending, not a down payment on a sequel.

Hey Everyone! I’m the author of the game and side stories. Thank you so much for being interested in these! The new ones also take place before, after, and concurrent with the game. I hope you like them!

And, for the record, I am planning another A.W.P.W. game. Although it probably won’t be a direct sequel, it will be in the same world with the same characters, and new ones. Are there characters you would like to see in the game? Any you don’t care about?

But, even though I am planning a new game, Heart’s Choice will only green-light it if there’s enough interest. So, if you want it, let them know. They’ve been wonderful, and I’m very grateful they’ve given me this platform for my A.W.P.W. Universe!

I haven’t had a chance to read the new stories yet, but as a fan of the game and the first set of bonus stories, I’m excited to try them out.