Sorry, I mean, can you copy-paste the actual text instead of screen shots? And you’ve tried deleting both lines and re-typing them? You could also try clearing your cache so you’re sure you’re running the latest version of all your files, then, perhaps?

Sorry if this sounds stupid, but do you want the entire code of startup?

Sure? You can always put it under a cut with [details=startup] [/details]. (I’m sure I’m the one who sounds stupid, fishing about for a solution to a very odd error with you all, so I wouldn’t worry about sounding silly or anything. ;p )

Well, I’ve no idea what your problem is, but you don’t need to create gender twice…

COUGH
Shh.
Every genius is crazy in a way.

Also you’ll want to indent the achievement texts or you’ll have an error, like so:

So, I threw your code into CSIDE and typed up the snippet from your main scene, like so: 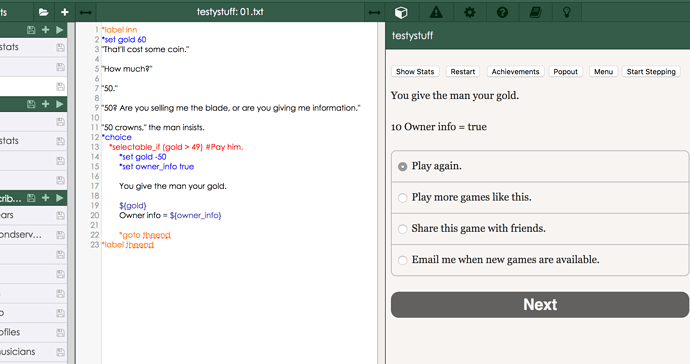 And it worked perfectly.

Are you running the game in a browser when you get the error?

By the way, do you get this error runnning quicktest/randomtest or playing through the game? Apparently quicktest can give weird errors even if it is fine.

Welp, I just click “index” and off with you.

Yeah, did some messing around, looks like *selectable_if is not the problem here. The game, for some reason, doesn’t want to see owner_info as a variable.

If clearing your cache doesn’t work, I would suggest deconstructing the choice, maybe making it a *goto or to a fresh label, and putting the stat changes in there. At this point, it may just work.

Worked, closed all files and did everything you asked.
You’re the best. <3

@N1GHTMAR3 woah. What program are you doing your writing in? It’s not programmer’s notepad, is it? If it is, how do you get it to color commands? I thought you can only do that with supported languages.

I have the same problem, but your solution did not work for me. saved+closed+private window (also deleted the cache).

I think it might be a typo in the first ‘antler_length’; the ‘g’ and the ‘n’ are transposed.

I’ll signify your typo so it will embarrass you more

About the program that can do syntax highlighting, it’s Notepad++
Yes. It can highlight CScript codes (you can create custom lang for it). Heck, it pretty much highlight everything and the program can be modified to the ground.

Edit: I’m using choicescript IDE currently, but I think you were remarking about the notepad++, sorry got confused there.

@Fiogan @Szaal wow… after fixing 30 crazy complicated bugs by myself, I can’t learn to spell.
shakes head
Thanks for the help. My brain wasn’t working today… I mean yesterday. It’s not working today either…