Hello everyone, Cierra here with my main project’s REWRITE! Allow me to welcome you into the dark, twisting world of Mind Games, where the cycle of hunter and hunted is in constant swing…

The Mind Games series will be a science-fiction, fantasy, and romance heavy game. It is currently the rewritten Prologue-First section of Chapter 4. Not everything within is final, and a lot of choices will be expanded when I finish the first draft.

In the small city of Armington, something is lurking. A defiler of souls, a monster in the darkness, made of darkness. A monster that kills your closest friend, leaving you to be the sole witness to its murder… and far more.

It turns out no being has ever seen this monster, except you… and when it returns five months later, you learn it hates that you saw it. And during the first fight of many, it learns you have a secret that furthers its obsession over you: you are an Alpha, one of it’s preferred prey.

As an Alpha, your life is complicatedly simple: never be revealed. Never have your status as an Alpha be known. Otherwise… you’ll be dead in the streets. Considered super-humans, Alphas develop extraordinary, bordering on fantastical powers, leading them to be regarded as too dangerous to be left alive. (Or, well, after a failed attempt to militarize them.)

Your life of hiding is now in danger. Between being hunted by many, you find one lone “friend” in the darkness: The Advocacy of Peace, an organization known to the public to reign herd on Alphas, while you know better: the A.o.P. polices supernaturals… and, depending on who you listen to, Alphas are rumored to go missing in their employment. And while they stand for peace, you know well enough they are more than happy to do whatever necessary to attain peace.

Who will you trust in this new terrifying twist to your world? And… will you let yourself have some reprieve from it to find someone to count on when everything goes to hell and back?

Some features that will be in place:

The demo link is Here!!!

(All support is super helpful in keeping me writing!)

I hope you enjoy reading and playing as much as I have writing!

Ok, I’m, going to calm myself and all that, but, yes, just wanted to get first comment anyway ;D

And proclaim my love for Loche

Aww. Looks like I got second reply. I’m going to read this now and if I fall asleep, give you feedback tomorrow

I love the way you create such a creepy, ominous atmosphere - I’m really excited for this game!

@happenstance2me AAHH!!! THANK YOU SO MUCH!!! It was my first real attempt at that kind of atmosphere, and I’m so glad it was effective!!!

(And thank you for the error there, it has been fixed now!!!)

I love love love how MC is not helpless about the freaky monster that comes after us. Man did I enjoy ripping his fucking pincer off. I am really looking forward to see how strong MC can get and if we can reach those two Alpha designations above our own! It will be interesting to see how our powers expand, what new shit we can learn, or how we can combine our powers with our more physical traits!

As per the team, even if it’s brief, I love them all already. Irien is a little shit, but man, I like him

Also, with Loche? Man, I can wait to glare and snarl at him (love that glaring at him at the meeting gives you points with him lmao). And I can’t wait to find out why the hell he storms off like that squints at them.

Fawn is fucking adorbs and I want to gift her some pelts somewhere down the line tbh.

Freja… listen, Freja… I love her. Let me be her badass companion that keeps everyone straight I’m looking at you, Blake and Irien

And Adonits… he seems fucking interesting as well, but, wtf is up with his skin?!

In general, I can wait to get more of this game and see where everything leads

And in a last note, I am praying that somehow, we can meet Sylvia again, because I really enjoyed our friendship with her in just a few pages of knowing her.

I love love love how MC is not helpless about the freaky monster that comes after us.

So much same! I went for the eyes, and god, it was so satisfying!!

Man, I could imagine the crack noise of crushing the pincer of that thing. And when you literally rip it off and leave only a leaking hole on his face? Yeah, that felt fucking good.

Dude, this MC is probably the most powerful out of all of the MC I played. Especially when I crush the monster’s pincer! Also, our MC’s dad??? God, I love him so much. Is the monster one of the ROs.

@Umbreonpanda haha, I’m glad you think so!! It was fun to write the fight scene with the monsty, hehe. And no, he’s not an RO xD

MC’s dad is WONDERFUL AND SHOULD BE PROTECTED AT ALL COSTS.

Umm, drink vs glass is mainly a colloquial difference! It just depends on where you live how it’s said

(also, if you’re asking for an actual drink versus a sip)

AH, THAT’S MY FAULT! I wrote the choices without the gender variables, thank you for pointing it out so I can quickly fix it!!

I don’t know why but recently there are more and more awesome WIPs. This is one of them. When I’m back at home I’m going to read the WIP needles to say I’m hyped

@Bizimo Thank you so so much!!!

Hey loving the story so far, it is brilliantly written.

I have however came across a problem when choosing a interaction with Loche.

Oh I am loving what you have so far!

I’ve really enjoyed it so far. I would like additional options for the grieving process though. You have a lot of sadness but I personally was feeling more angry than anything. Hatred for the bug and for yourself at failing a friend. You have a lot of satisfying options later on when you’re fighting the thing but no means to express your rage immediately.

I apologize if this seems too critical, everything else is really good and that’s not exactly an insightful comment. 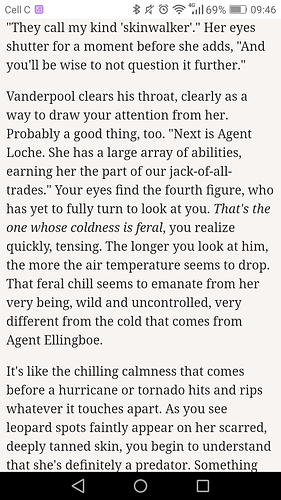 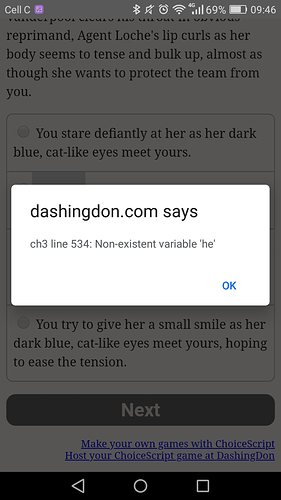 This happened while speaking with Loche

@Zoroth @Starryeyed Ah, these errors should already be fixed! Try refreshing. Dashingdon is being REALLY stubborn lately, so sometimes it refuses to read changes.

Thank you both and @Chiirps for your kind words!!! I’m so glad you’re enjoying it, and I hope you continue to!!

@grimbutnotalways Hey, no, it’s not too critical! I was planning for a full conversation about it to come up soon with Dad where you choose how it makes you feel inside. I hadn’t made it earlier because I couldn’t find a good place for it, but I might poke around the Quinn scene in ch2 soon and see what I can do!!! Thank you for your feedback ^^

I give you ten claps

The story was good and even though the MC got best up, it was nice getting karmastic (Don’t know if that’s a word) revenge for our best friend. I am also looking forward to the romance aspect of this game

@Zoroth ah, thank you so much ^^ I hope you continue to enjoy it!!! There will be revenge had, oh yes…

@Taylor_Enean um… please refresh and try again. I think that’s a Dashingdon side error because the startup page looks fine. And the betas are opening it without trouble, hmmm…