No. There is never enough content. You could have had a million words ready, with another million being wrapped up, and people who like what you put out would STILL go “oh man, I wish it were longer.”

Ain’t that the truth. One of my friends told me once, I’m not allowed to show her any more of my writing until its finished.

I shared a lot of the same fears that you do but I am so, so glad that I decided to release my demo when I did. My demo was very short when I released it, and I thought it was a pretty niche topic too. Despite that, I received tons of supportive messages and incredible suggestions.

Bugs and typos might happen but that’s part of why demos are great: nobody who clicks on a demo expects perfection. So be brave and take the leap!

Wow, thank you all for the kind words! I never expected so many of you to respond to my post, so thank you to those who has taken precious time to do so.

@GrimReaperJr1232 that’s me every time I reread my work

feedback is so lovely to receive, and it certainly does wonders in enhancing one’s motivation!

/Deep breath right, so. Putting it here so I won’t back out: I’ll share my demo on the 9th of June

14k for a play through is a pretty good amount! It’s often easy to think that word count isn’t enough, but obviously it’s an interactive fiction game so there are so many different branches that readers may not even get to if they don’t play your game more than once.

In terms of whether people will want to read it, there’s always going to be someone who wants to read your story. Just because it may not be one person’s cup of tea, doesn’t mean someone else won’t absolutely adore it — there’s always a place for more stories.

Deep breath right, so. Putting it here so I won’t back out: I’ll share my demo on the 9th of June

Can’t wait to read your demo when it’s out!

Adding to everyone else’s sensible comments, 14K words is the size of a hefty short story - it’s a very decent length for a demo. If you’ve established what your game’s about and some of the characters, and give a sense of where it might be going, that’s great to start with! People will always want more, but if they want more because they’ve got immersed in your world and want to spend more time in it, that’s a good thing.

Best of luck with the demo

Yes, thanks for those stepping up and contributing to the success of thread.

@Anjie — another trick to make things run smoother is to tell everyone what types of feedback you are looking for, when you post your demo.

I think a good example is @will’s just posted demo:

Feedback on This Thread

After finishing the demo, consider some of the following questions on reflection!

It might seem weird asking, but readers/testers do not read minds, and they often provide more focused and constructive feedback when guided.

Last: many experienced authors/developers will put a little blurb in their thread on what they consider is constructive feedback. Feel free to use :

My thoughts on providing good feedback as a tester:

Good constructive feedback should focus on the work rather than being a personal negative attack against an individual.

Do not let your emotions get the better of you, as criticism levied while you are angry, disappointed, or frustrated may lose its message.

The outcome of criticism should still be positive and contribute to a better story or game.

Or look at @milaswriting’s WiP thread, @HannahPS’s, or @Schliemannsghost 's threads for ideas on how to phrase things.

I am sure that there is not an author in the community that would object to you doing this.

The incredible support on this thread is really humbling

There are so many kind and talented authors here! Thank you, again, to everyone who has given words of encouragement <3

Thank you @HannahPS! I’m crossing my fingers and hoping that what I have now has checked all the boxes you have mentioned. I’ll keep your advice in mind too, @Eiwynn ! I shall draft something up in time for the 9th

Little later than usual posting on here. Recovering from a double release month in May (Book and IF), so reeling just a touch. Currently working on some copy edits for a client, and have some books to format for another client. But then we can plug back into writing work.

For June, I want to get my little charity shifter romance banged out so I have time to edit it, and I’d really like to make some headway on the demigod romance that’s still hanging over me, now that I feel like I have a little breathing room. Plus a publisher just dropped a “we’re sending this to the editor in two weeks” notice on me…so have to plug some work into the Secret Squirrel™ project as well.

Much luck to everybody with your goals!

Little change of plans- I will be posting my demo later today instead as I’m busy tomorrow!

I will be back after work

New writer here. I have questions about WIP. I was under the impression that we couldn’t post anything to dashingdon unless it was mostly completed, but in this thread I’m reading that people are putting things out much earlier. How and where? I’m nowhere near ready to make any of my writing public, but it’s nice to have an idea of where I’m headed and what to plan for. Thanks in advance.

I’ve seen stuff on dashingdon that’s literally half a dozen pages long. Size does not seem to be a consideration.

For The Gray Painter, I opened the WIP thread with 7 chapters, about 60,000 words.

Oh wow, thank you for these examples! I’m only just now diving into the WIP/beta-testing aspect of this community, and I’ve got to say I’m looking forward to becoming part of it and hopefully contributing:)

I hied over to the local coffee shop with my laptop, all set to get in a good morning’s work and plenty of coffee, and then I realized that I forgot my cellphone at home. Ah, well. I guess I’m working from home, today.

I got through the Noblesse Oblige beta! Beta testing is always a very intensive time as I like to be very efficient with implementing the fixes and expansions, so it’s been a busy few weeks. But the game’s gone to copyedit now and I feel really proud of it, and pleased that it’s going to be out in the next few months!

I posted all my WIPs much earlier than y’all on average:

Nuclear Powered Toaster- Less than 2,000 words I think, although I had 30,000 or so words written but not converted into script yet. I was new is all I can say in my defense.
The Parenting Simulator- 9,500 words (I think the intro and Year One were finished)
League of Lunacy- 15,282 words (ironically, the only one I never pursued further)
The Day After Ever After- 6,262 words (I wanted to have something up by year’s end after 2020 was such a crap writing year, so this wasn’t too bad given I started writing in on the 20th of December and then put it up on 12/29)

Got my last chapter up for Day After aside from the epilogues. Feels good to be getting close. Just need to make sure the art will be ready and push on to the finish.

While we’re taking word counts, my yet-to-be revealed WIP is sitting at 3k atm. What was meant to be a prologue kinda… grew.

Yep, that tends to happen.

I recently started a new job and hadnt written since until two nights ago. I just have hours and told myself i was too tired to write. Then i saw a prompt list on tumblr and thought I’d use it to write a snippet every night after work to get back into writing, and only two days later I realized how much writing seems to revitalize me. I really needed it, and I’m so happy to be writing again.

I thought I’d share how my writing has been progressing the last couple of days: 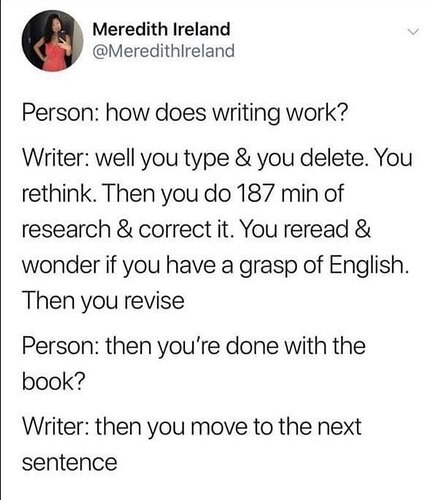 Everyone have a good weekend, and for those in the US, remember Monday is a new federal holiday.