The above should be fixed in both branches now, thank you.

When I try to load my saved game: 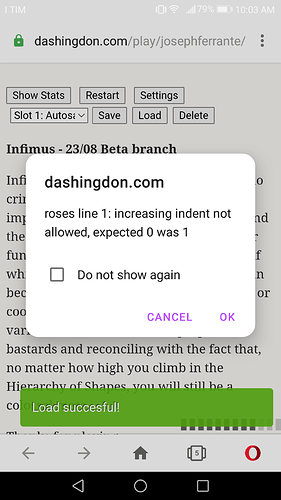 This is a new play through, same error: 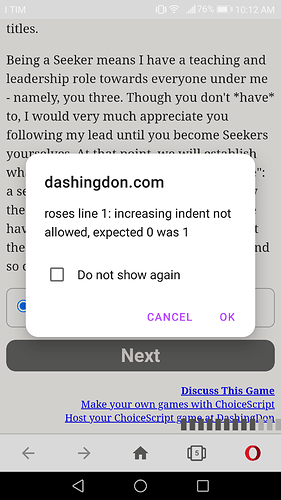 I swear that scene is cursed. Fixed, and I’ll run a few tests to automatically catch any similar errors.

I don’t know if this is an important one to point out, but the dialog keeps looping everytime I eat the chocolate. It’s as if I was eating it and talking to the mask for the first time, every time. 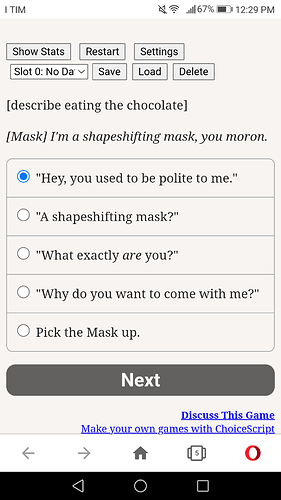 Everytime I select the choose type or color of mask: 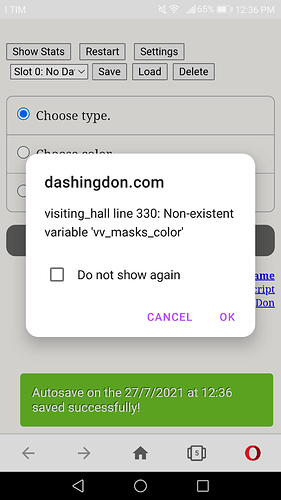 After I select gauntlets, it loops and keeps telling me I have leather. 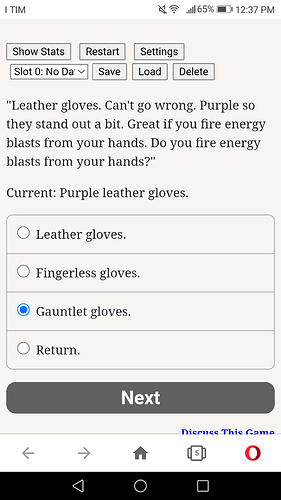 Great demo. Can’t wait for the next update!

oops, you caught me while I was switching out the dev copy for testing. Both of those issues should be fixed just now. And thank you!

Should be fixed now!

While you can track a lot of the systems I’ve introduced back to some of my favorite videogames, Memories come from something I used to do when I DM’d tabletop rpgs. Sometimes not every player was available. Others, the prep for the regular campaign wasn’t done by the time we got together to play. Or maybe we just wanted something different. In those cases, I’d take a side character and go through some event related to the main campaign but which the main group of PCs wouldn’t get to interact with. This usually took the form of dream sequences, flashbacks, stories featuring side characters. Let’s say you, as a player, are to explore a crypt where a group of bandits took a precious, cursed artifact. Playing a single session as the robbers, trying to survive while the artifact glows and tombs open around you, can be an interesting appetizer for the dungeon itself.

Memories, in this game, have a similar purpose. They are self-contained scenes accessed through particular triggers. They reveal character, deepen the game’s world, and have some kind of consequence on the player’s physical and/or psychological state. Going through the memories of a master marksman might let you hit a crucial shot when you really need to. Playing through one of Olaf’s raids let you tap into your inner berserker. Or perhaps give you new things to shapeshift into. Or add a new ghost to your Backroom.

In simple terms: Memories are XP points you can spend to boost your stats and/or unlock particular perks. Since your character’s progression is framed as you remembering things from past villains, I thought this would be the most elegant way to represent that mechanically. You gain Memories at important moments during the course of the game, much like milestone levelling in D&D. But you can also discover particular triggers if you veer off the beaten path, resolve quests in an interesting and creative way, go the extra mile.

Broadly speaking, there’s the Memories that come from regular past Villains, and those that come from castaway ones. The former (Echoes) are the most common and tend to be in some way helpful. The latter (Reveries) are more…intense, and tend to provide tradeoffs instead of straight buffs. I’m using Echoes and Reveries to refer to both the scenes themselves and whatever might appear in your Backroom as a result of completing them. 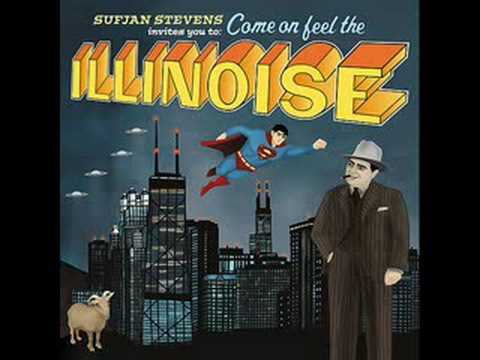 A secondary property of the PC’s powers is, as I’ve called it, memoriphagia. Or, obtaining someone’s memories by eating them or a part of them. I couldn’t find an actual name, as the trope isn’t very popular. I encountered it in Prototype, a videogame series ended way before its time: you could consume enemies to obtain their memories. This was pretty gruesome, extremely gory, and very elegant for the kind of game Prototype was. Consuming, growing, absorbing things into you was central to its story and setting, so it was mirrored in the mechanics.

Here I’ve decided to include it as a secondary property of the PC’s Gift. An additional power, if you will. A mutation. Though Infimus’ themes are different, there’s overlap. Besides, just imagine the kinds of evil stuff someone can do with this power. Or be tempted to do.

How does it work?

It activates every time you consume a part of another living being whose memories you can process. The more you eat, the more you remember. Eat a nail clipping, that’s barely anything. Eat a finger, that’s something. Eat someone’s entire body, you get a fairly accurate picture of them and what they were like. The bigger the meal, the more it’s going to be extremely painful for you and result in some kind of permanent mental scarring. Excluding the obvious moral and ethical concerns, of course. I hope to use this power as part of those juicy choices where you have to ask yourself how far you’re willing to go. Where you draw the line.

And yes, it can activate from kisses. As long as they go further than a peck on the lips, that is. I’m sure this will have no ridiculous, hilarious and improbable consequences on your character’s romantic life. None whatsoever.

Those memories will manifest themselves in the form of visions after you do the act, and be added to your Backdoor if you want to play through them later.

Here’s a long song for a short devlog. It’s about being in someone’s mind. I think. It slaps. I was thinking of sharing clipping.'s Body And Blood, but it’s a bit too graphic. I’d encourage you to check if out if you’re into, uh, experimental horrorcore rap. 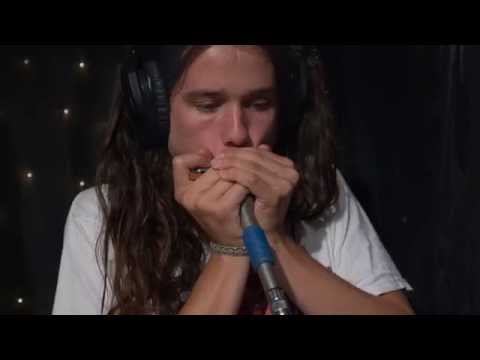 And yes, it can activate from kisses. As long as they go further than a peck on the lips, that is. I’m sure this will have no ridiculous, hilarious and improbable consequences on your character’s romantic life. None whatsoever.

Well as far as cute guys go there is a certain thing my gay mc can swallow that should count and also leave no mental scarring as it is really a pretty mundane thing these days.

Ima real with you guys, I just want to beat some heroes up

Sorry for being quiet the last week. Had to deal with some personal stuff.

You can access the Greenbloom Memory by eating the chocolate in your room, then going to your stats, then the Backroom. A lot of my recent work was on the backend and I had to deal with the aforementioned personal issues, so this short, linear and self contained story is all I’ve got this week. I hope you enjoy it. It’s a test run for the Memories system and I’m quite happy with how it turned out.

Going forward, devlogs will be on Wednesdays and updates on Saturdays. I’m also tentatively shooting for the second major update to release October 9th, buuut game development doesn’t follow the laws of linear time. So, we will see.

ok, should be fixed now. thanks for letting me know 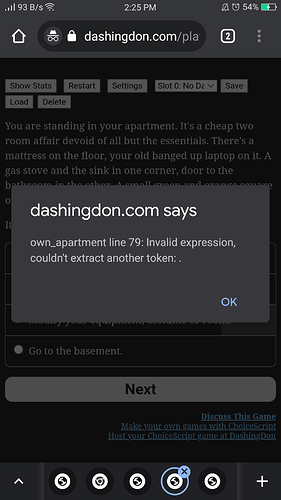 Should be fixed now.

On an unrelated note, I’ve added a button to the splash page that lets you go straight to where you can play through the latest content.

There is a lot of errors in your demo. I forgot to screenshot all of them.

And the choice Look for the Tailor is looped.

Fixed all of the above and ran some tests, just to be sure. ty