I feel like I’m struggling to find an overarching plot?

I don’t know if I’m going crazy from planning my story but the more I organise my story the more I feel like I don’t have a main plot?

The super basic premise is the player lives in a neighbourhood full of pretty sinister individuals and the goal is to remain as mentally and physically unscathed as possible. I do have like smaller routes where you learn about characters (whether by becoming close enough to have them open up to you or being really good at snooping) and build relationships with them. But my problem is I feel my story isn’t building up to a major event? Like, there’s no “big bad” to fight or mystery to solve.

For lack of a better word, I feel like my game feels pretty “sandbox” in terms of concept, which is not exactly what I want.

I have tried coming up with a major event in the story but it doesn’t quite feel like what I want. I want something that can give the player a reason to go here and there and seek out characters to interact with. Mine could fall under the horror genre, I guess, so an example of what I’m thinking of is Highlands: Deep Waters where there’s the overarching plot of the murder, and later the cult.

(Also do let me know if I’m supposed to be posting here or is there a general help thread?)

I totally understand what you mean. I have a WIP right now myself that’s threatened multiple times in the past to drive me insane and I’ve worked on a particular novel (my first one) that very nearly did drive me crazy lol.

For me, the cause was just how inexperienced I still am with writing, even though I’ve been on it for a few years. Another reason I think is I dabbled into some very complex stuff very quickly, it looked like I could handle it until I realized I couldn’t. The thing is just, complex, fully thought out stories drain both mental energy and time.

The solution for me has been in two parts: going easier and being patient. With time my first novel has improved and it’s still improving. I’ve simplified it a lot more but it’s still as sophisticated as I want it to be. Compared to where I was with it a couple years back, it’s much better now. Even though it’s not finished yet, it will be someday.

I hope I was able to at least relate with you a little bit and help you overcome some of your frustrations.

Don’t be too hard on yourself, you’ve got this.

I think it may help to focus on defining the player character more. Why are they the player character? What makes them the main character? Usually they have a backstory that motivates them or something happens to them that causes them to take action. Sometimes if the player is too much of a blank slate, it’s hard to devise a plot.

You can find the answer in first envisioning the ways your story could end. Does the Mc end up insane? Do they learn to live with their odd neighbors?

A plot is basically obstacles getting in the way of protagonist’s objective. A story is how the protagonist overcomes those obstacles and what they learn and how it changes them. Those obstacles can be antagonists or events that lead to climax then culminate in resolution. You have already the objective which is maintaining the MC’s sanity and the obstacles seem to be the MC’s neighbors and their antics.

In that regard, I think you already have an overarching plot, in this case, stoping the neighbors from driving the MC insane.

But my problem is I feel my story isn’t building up to a major event? Like, there’s no “big bad” to fight or mystery to solve.

Your dilemma stems from how we generally view stories and plots. In general, a story follows the “beginning, middle, end” pattern or “exposition, rising action, climax, falling action and resolution” structure. 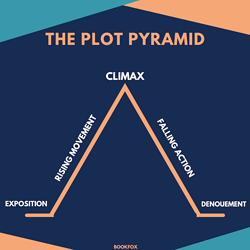 From what you said, this is the structure you want your story to follow but it might not entirely work for your story and there are many different ways to set up your plot that don’t necessarily follow the three pyramid structure. It sounds like your idea might be one of them.

Your idea isn’t inherently sandbox per se but the conflict isn’t the main driver of the plot, the goal is. In stories where the conflict drives the plot, there comes a time where the protagonist has to overcome said conflict which is the climax, the tip of your pyramid.

In stories where the goal drives the plot, the plot structure looks kinda like this. 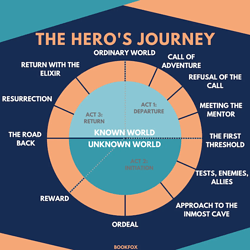 Simply put, the protagonist goes through an event that changes them for either better or worse. It kinda sounds like your story is leaning towards that direction. The protagonist moves to a new neighborhood and has to reckon with its quirks which can result in change for their character.

There doesn’t have to be a big bad for it to be an enjoyable story, I think your idea sounds really interesting and I would like to see how execute it. If you need more guidance on story structure check out the website I got these images from here.

Good luck with your story!

This seems like a sort of horror-mystery combo, what with the opportunity for snooping and the sinister people there. There doesn’t need to be a big bad, but if you’re having trouble thinking of what the overarching mystery could be, there are multiple different outcomes. For example, say some of the sinister individuals are connected, whether by a syndicate or gang of some sort, or something more supernatural. (family members, a mark, etc.) Maybe there’s something behind a string of murders with curious similarities in victims. (The big bad would be whatever the answer turned out to be, if there’s a person behind it.) Things like that! MC could basically run around and investigate while also debating on whether or not to let their curiosity win out or attempt to keep themselves sane.

Try stripping it down to the core, and say it in one phrase. What’s your story about? Not what happens or the characters that you can or can’t encounter, just what’s the core of it?
if you don’t have a very simple way to resume it, you’re probably right. Try to find a reason why your story happens, what message is all based on? What pushes the character to do what he/she is supposed to do? What is it all about? What message do you want to tell?
Once you have the core you can start building up all the rest on top of it.

I run into this problem A LOT when I’m writing, mainly because I usually start with characters that I then try to craft a story around, rather than a central idea or premise.

My advice would be this: try and find a goal/motivation for a main character that will underscore their actions. Maybe they’re looking for a missing loved one, and there’s something about the town they live in that’s more than meets the eye that they uncover along the way. Maybe they’re a detective or investigator trying to solve a mystery. These are both pretty cliche but these are just meant to be examples to illustrate some of the type of things you could play around with. Once you have a main goal/motivation for the main character, it’s much easier to then craft a plot around that, since now they have a reason behind every action they take that isn’t just “they go there because the plot demands it”. You can also then craft an antagonist/villain who will get in the way of that goal, and go from there. It might take a little bit of workshopping, but that’s what I recommend if you have characters but no plot.

I also want to add that having no “big bad” or overarching mystery isn’t necessarily a bad thing. Not every story needs a central plot or antagonist, and it’s perfectly fine to have a slice of life story that just consists of character interactions and building relationships, with maybe some mystery elements in the background. However, I completely understand if that’s not the kind of story/vibe you’re going for.

If all else fails, you can just try building more elements of the world/characters. I often find that by building on elements of the story that I already have, plot ideas just often come to me without me having to strain myself trying to come up with them. Whatever the case, I hope you find a solution that works for you. Good luck!

You could always do one of the following;

I am not clever or anything but ultimately you have to look at the story from another perspective yours.

What do I want this story transmit to the player? What emotional journey I want to characters feel?

Who is the antagonist that moves the plot foward?

And finally How do I want to ending it in a way that I fully cover the emotional journey I wanted to express through the whole thing?

But that is just my experience, so take my advice with a grain of salt. I am nobody, only a person that have written many stories