How to make a list of things in CS?

I preface this by saying that by list I don’t mean something like an array - a way to store variables. That’s NOT what I want.
The List I’m asking is more of a stylstic choice that’s been bothering me for some time.
The big question that interests me is how do you make a list of features, like this:

The thing that interest me more are those “dots” listing individual points. They look like unordered list in HTML, but I’m not sure how to achieve a similiar effect. Are those just very small images? Or are there really just part of HTML? Is this part of COG website, or something Choice script can achieve on it’s own?

I know this won’t be very useful in actual development, but I’ve been curious, and wanted to know how this thing is made.

hmm. Not sure if it’s achievable in CS. But maybe you can print a image of a list and add it to the game using the *image command?

You can create bulleted lists using the unicode bullet symbol: • (U+2022). It’s one of those lesser-documented but useful features of CS.

For instance, this code: 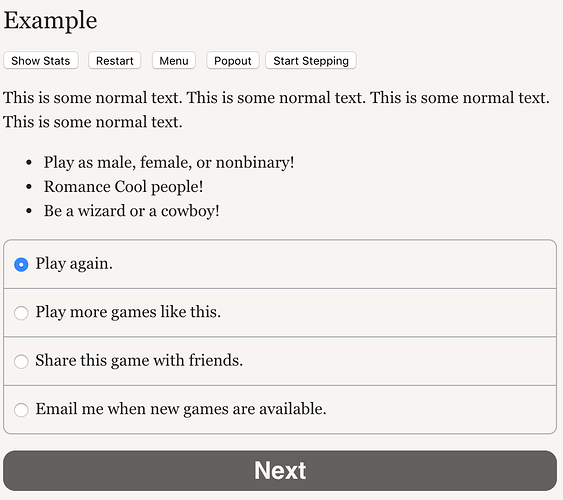 However, • isn’t supported on DashingDon, so the same code there renders as 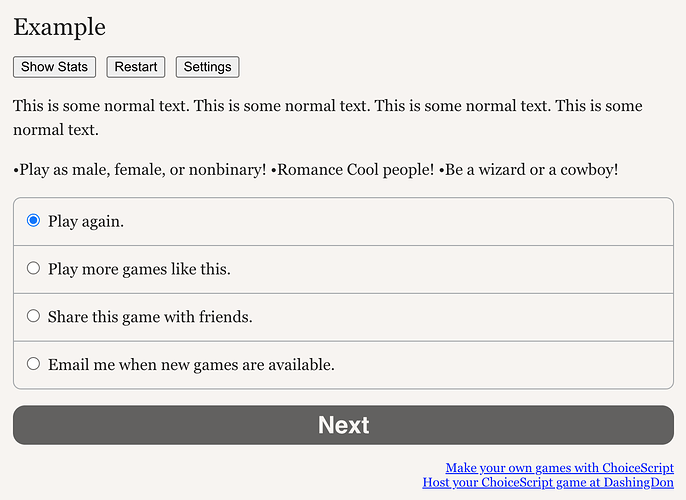 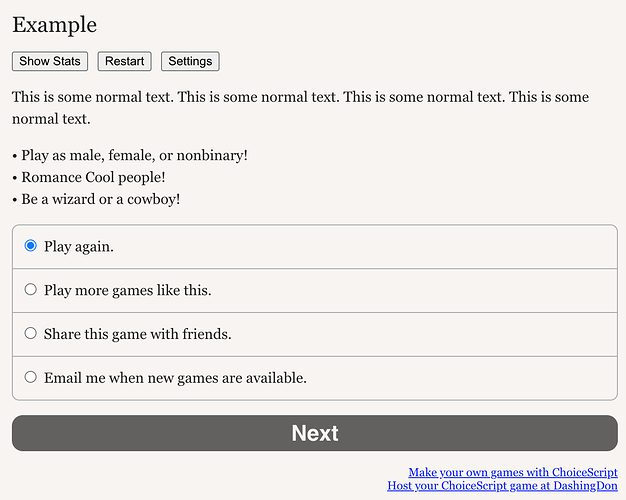 It will still render properly in CSIDE/when manually compiling your game, and now looks OK on DashingDon.

[n/] creates a carriage return, like the *line_break command

Thanks! That was very helpful! I just need to know: what’s the difference between using *line_break and [n/]?
I think dashington should be able to process the former cause it’s a choice script command.
Should someone use one over the other?

They’re pretty much the same — they both insert a carriage return / line break and are both supported on DashingDon.

The main difference is [n/] can be used anywhere, even in the middle of words, while *line_break needs to be on its own line.

If I write Hello w[n/]orld it will output as:

Whereas if I use *line_break I’d need to write

to get the same output. You can use whatever is easier for you. Though in general, it’s best to use line breaks as sparingly as possible, as they can make your game less accessible for screenreaders.

This thread has a good in-depth explanation on how whitespace works behind the scenes:

Over the last few days, I’ve been experimenting with how ChoiceScript displays different kinds of vertical whitespace. Having searched the forums, I don’t think anyone’s investigated this topic in great depth yet and I thought it would be a good idea to post my results here. If you’re new to ChoiceScript and need help navigating the (sometimes confusing) mix of options for creating paragraph breaks, I hope this can serve as a useful tutorial! And if you’re a veteran of ChoiceScript and want to …

Thank, you answered all of my question… Now I think I should close up this thread.
…it is possible here, right?

It will close automatically a day after no responses