Get in Loser, We're Talking About MCs

I’ve started playing my OC Leon Von Varnhagen. I made him as a lord in one of my tabletop games and found I just really liked him so why not put him in more games?

Found that I really like him so far in the infinite sea saga. The war for the west didn’t have much room for personality I felt personally, but so far it’s been nice. He is the personification of a true noble leader, seeing himself as a servant of the people rather than their ruler. Simply the best way to help them is to lead them. Of course can’t have yourself be king in all games so the core tenants of his character are an unwaveringly good heart, a leader whenever he can be, willingness to get his hands dirty if it means the greater good, and also ripped as hell cause 90% of the games have combat and melee is fun.

Even have art of him being made actually! 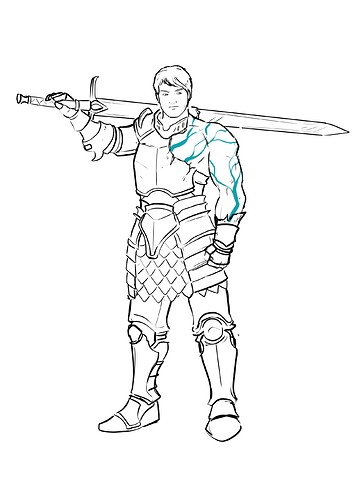 )
I’ll talk about all of them here, and attach art if I have it.
(All the art is my own creation btw)

I tend to use the same MC for every game so I’ll just talk about my favorites that aren’t him.

Those are just my current favorites. I have tons more but since I usually use the same MC, they’re more or less all the same.

My favourite main character from a choice script-game is my surgeon Ladislas from Mask of the Plague Doctor. I just adored how he turned out, and since my first playthrough with him in 2020, I’ve replayed his route two times more to relive our little medical adventure. He was extremely jovial; that’s my strongest impression of the man. Whenever I picture him, I just see him with a huge smile on his face. That, along with his high panache-stat, made him quite the character. He was also a complete nerd when it came to his work. Medicine (or surgery, as it were) was his calling for sure, and that took top priority at all times - he just loved the human body. Politics-wise, he didn’t do much, he mostly nudged people in certain directions (he was a huge populist), but he wasn’t too keen on doing anything himself if it didn’t have to do with medicine. I was very pleased with the ending I got - he stayed in town with his newfound love, fellow surgeon Ioco - but he lost Alice as a friend after keeping some medical secrets from the Crown, which was a great shame. They had a sweet friendship. The second main character I played from this game deserves a mention, too. Daquiqi, the dour, hyper-religious mystic, who got sucked in by the Dweller-cult and ended up as a conduit. Delightfully creepy.

I adored Leofwine Africanus from Chronicon Apocalyptica. An extremely charming teacher who relied on his tongue only during his entire adventure. He excelled when it came to rhetoric and interviewing, and he was very flexible, intuitive, and cunning, with a high “style”-stat. It was always a delight to see how he would sway the next person. Him and his beloved, Deorwine, were great together, with their bombastic personalities and their silver tongues.

I loved to play as Reginald Passepartout from Tally Ho! He was a tough, bold fellow with high skulduggery, and it was a delight to see those features mixed with the stiff upper lip and deadpan demeanor that I felt that the main character of this game often had. Because of this personality - the boldness and skulduggery - I first thought that he would end up with Haze, after some pleasant drink-thieving and outdoorsy fun, but no, as it turned out, his true love was Rory all along. When Rory asked me, when I was playing thief, what I had done to Passepartout, whom he loved, I realised that he was my man. I’m sorry, Haze, it was fun - but!

Then there’s Vey Elison. Poor, poor Vey Elison; I worked so hard for his happy ending! He was the main character of Choice of Magics. Vey was the glamor magician, my charisma king, and I loved him dearly. Now, I knew what things were going to get less than stellar if I overused glamor - but I didn’t know just how bad things would get. I had read that one would get sick, but I didn’t know it would actually kill you. When I replayed the game and choose a different path I read the warning early - overuse of glamor would cause rot, which would kill you - but at that point it was too late for Vey. This man was a real peach. Humorous, kind and optimistic. A little flippant, perhaps, but all in all, a great guy. All he wanted was to have a good time, hang out with his friends and his pets, and sate his creative spirit. I went through the game choosing the happy options, the blasé options, the options of joy de vivre, while the thought the rot is spreading, I don’t know how dangerous this is, this man might end up a tragic hero echoed in my mind. And there it was, eventually. Poor Vey Elison collapsed, deathly ill, body filled with rot. The first ending I got was him sacrificing himself to bring peace between the two feuding nations, everyone was happy, ode to joy and so on; but poor Vey was dead! I couldn’t take it. I tried another option; but that was even worse. Sure, he died peacefully, telling his friends and family that he loved them, but I couldn’t accept that my man Vey died! I
finally restarted the game, after realising that the only way of keeping this man alive was to kill one of his pets to turn him into a huge dragon (which I wasn’t alright with for several reasons,) deciding that glamor magic wasn’t cool at all. This time he was a fortune teller, and things went… as they did. Alright at first, but quite dull. He wasn’t a charisma king anymore. The enemy nation took his nice stuff. His partner, mayor Cos, broke up with him. But at least he was alive. Then he turned into a stylish tortoise and I had to restart yet again. Grr. I did so, and the game ended up with the world standing on the brink of chaos, which was… alright, I guess. Alright, but nothing more. Vey was alive, and he was human, and that was all that mattered. For a while. Then I read that there was a way to cure rot - and it was on! The glamor magician, the charisma king, is back! That time it went swimmingly. The war never broke out. Good ol’ Vey got to keep his nice stuff. He got married to mayor Cos. The country was overflowing with tiny, adorable little creatures after an impressive display of vivomancy. I was a very, very happy pancake, but, gosh, that was a trial. Perhaps this is what you get, for naming your character Vey in the first place. I was very fond of my second character in this game, too, Del Baxson. He ended up as a hierophant, and asked their pseudo-God Abraxas to go take a nap because he wasn’t needed anymore. I wonder what his extremely devout husband Blessed Sam had to say about all that.

Want to show one of my most developed Mc.

It being Gabriel from Son of Satan: The mortal coil written by Dae-Kalina.
Want to share more Mcs but unfortunately they aren’t finist.

This board was created in Milanote.

My favourite MC is from “Heroes of Myth”. Its not about the “attitude” but the constant dilemma whether they would lie or speak the truth as the center of the story. Plus it allows us not to overly rely on making a character one sided just so they would pass stats checks, its a freedom a lot of mcs lack imo. You cant have flawed and/or evolving characters now. Only path we have is to “pick a route and stick with it”. So having a character where what matters isnt how strong one of the aspects of your character is but what their actions speak about mc is what makes them my favourite