I like older love interests too (only in fiction, though, because I’m 20 lmao)

I’m not sure what age exactly you’re looking for, I know you said middle-aged but I’ve seen, like, 3 different definitions of middle-age before… In my WIP, Burwick Destination, one of the male ROs, James, is 35. (The other two men, one is 27 and the other’s age is incomprehensible, so. And the women are both over 30.)

It’s funny, I got a lot of people saying some characters in The Magician’s Burden were childish and silly, and I’m like, “Well, yeah…they’re mostly in their teens or early twenties.

Obviously there are plenty of totally mature, serious young people, but it’s definitely not the norm. And I say that as someone who’s 23.

Well, it’s not a released game and only has one chapter, but my WiP Land of Slaves and Steel has mostly older character RO’s . Most are 28 and above, and two are in their mid to late 40s, however like I said a WiP so, no romance yet.

In Community College Hero, you play a young adult (I think about 18 to 21 years old probably?) and one of the ROs, Crook, is about 30 years old.

The Mysteries of Baroque has an RO who I think is in at least his 40s, probably 50s as he has an adult son. The MC is probably in their 20s to 30s, I’d guess.

The Evertree series hasn’t quite reached that stage yet, but it was hinted at the end of the second game - Sordwin: The Evertree Saga - that one of the possible allies from the first game - Evertree Inn - could become an RO in the next installment. He’s a mature 38 years old half-orc. There’s also a female dwarven RO you can have in the second game who is 41 years old. Though if these characters can be considered older than you does depend on the race you choose for MC. An elven MC e.g. is stated to be 37 years old in book 2, while a halfling MC is 18 years old.

There are a bunch of games where the MC and the ROs are both mature, so that probably doesn’t count into what you mean with “older love interests”, maybe only from the player’s perspective when the player is younger than MC. Games like that are e.g. Rent-a-Vice, A Study in Steampunk, or Fallen Hero (MC is in their early 30s, at least two ROs are in their 40s, and one male RO is actually in their early 20s, so younger than MC).

Others have mentioned Tin Star - two male ROs are older than MC, and I think Dan Schmidt is the oldest of the ROs in that game? At least he has a lot of stories to share.

Ray is an RO on Betovering House, and he’s 37 years old. The MC’s age, if I’m not mistaken, it’s not made clear, but I believe it’s implied they’re in their early to mid twenties.

The love interests in TDUP are generally quite old.

All I want is a game with an older (male) love interest. Was utterly blue-balled by I, Cyborg which gave us Smárason and then made him unromanceable despite all the chemistry there and opportunities that could have been taken. Some people are attracted to older men/women but I feel like games always make the love interests young and beautiful and this depresses me so much because it honestly just makes me feel like people don’t see the handsomeness/beauty in older characters. I have played a LOT of COG and can’t think of one with a love interest you could actually romance who was older (like middle aged.)

I don’t know whether this makes it better or - more likely - worse, but in the earlier outlines Smárason was romanceable; I cut one romance to keep the project down to a manageable size.

Something that’s come up elsewhere in the thread is love interests who are technically middle-aged or far older - but still wouldn’t necessarily appeal to people who’d like an older RO. I’d say Cyborg has some of that, too. In-universe, rejuv technology that resets your apparent age is available though expensive, and two of the ROs - Quillon and Ypsilanti - are older than they look. They both seem to be refusing to grow up, though, and while here and there you get a sense that they’ve lived long lives, they don’t look or behave in a way that would appeal to a reader who’s looking for dignity and wisdom.

(In the game, fifteen years have passed since Ypsilanti Rowe passed through Galdra and broke so many hearts. The youngest of Ypsilanti’s exes, Marley Onbekend, was nineteen at the time, making him/her in the mid-thirties now; I don’t think exact ages are ever given for Smárason or Quillon, but they both had well-established criminal careers at that point. In fact, I wondered a bit whether readers would be unhappy that all the ROs were too old, but decided that in a world where viewers don’t bat an eye at the same actor playing a college freshman one week and a DA the next, readers would probably just think of those ROs as “generically adult” and not care that their calendar age skews older.

double cross has a couple of older ros that are written ok.

In Double Cross you’re hired to provide security to a very wealthy man. He turns out to be the potential RO who is 10 years older than yourself. His rebellious younger brother is also a potential love interest, as is their elegant mother. Your employer also has a fiance or potential fiance who is another potential female RO. Someone is stalking the grounds, but perhaps even more importantly, there is a very big family fortune at stake, and the MC can potentially determine who ends up with it.

"As a private investigator you’ve always been interested in two things: solving mysteries, and kissing hot older women. Now you’re on a train with as many mysteries as there are hot older women. Are you in paradise? Well, that’s going to be up to you.

“Choose one of three women to spend time with on the train, each of whom is deeply embroiled her own mystery. Flirt and investigate through dialogue options and observation in order to solve your chosen woman’s mystery and find your way into her heart. Love on the Peacock Express features three possible romance routes, each with two unique endings.”

Best of luck! We definitely need more older protagonists and love interests across platforms and genres. 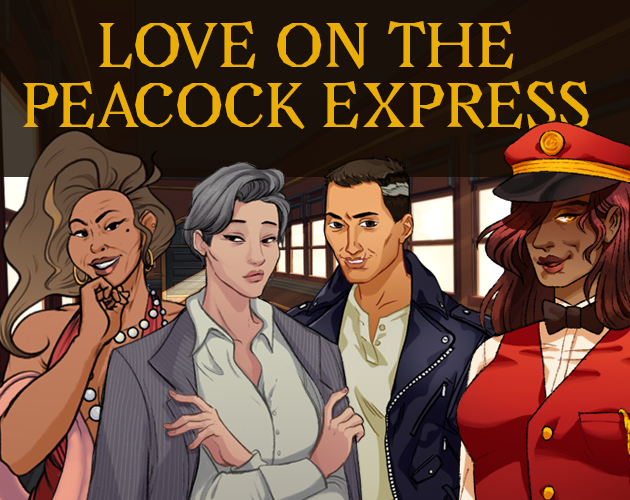 Love on the Peacock Express by trainmilfsgame

I could look past the age gap with the mother because I liked her personality, but the fiances thing I could not get into.

Same. I played out the fiance path just to see how it ended, and the ending was surprisingly sweet, but the trip there made me cringe more than once. ugghh…

That said, the writing was solid. It just wasn’t my kink. I also had an issue with the evilness required to get there.

Yeah the guy was an ass I felt, but did not deserve that ending. And it’s a shame I kinda did like the fiance during her sweet moments, but the whole watching her seduce and marry him, yeah nope.

There’s no romantic relationships at all on the player’s side in my Christmas elf game, but the entire game revolves around your personal relationship with Mrs. Claus, who is a decidedly older woman, both in true age and in appearance. Your relationship can swing from adoration to co-partnership to distrust and even open rebellion, if you want.

If I added any romantic relationships to the game, she would be first on the list. Santa’s dead anyway, so it’s not like he’d care.

In Double Cross you’re hired to provide security to a very wealthy man.

Great to see someone else recommend this game. While some if it can still be a little buggy such as if the boss is kidnapped while romancing Opal I still found it enjoyable.