"Falling in Style" - Which games allow for the most spectacular failruns

Title is self-explanatory. It’s always fun to be amazingly successful, but it’s also fun to see how spectacularly you can fail! What games allow you to do that?

I was thinking Tin Star was one of them: try to see how many Chapters it takes for you to get the most Legendary ending, and then die (by failing a skillcheck.)

Another is Choice of Rebels: try to see how few lieutenants and rebels you can get. My record is, well… 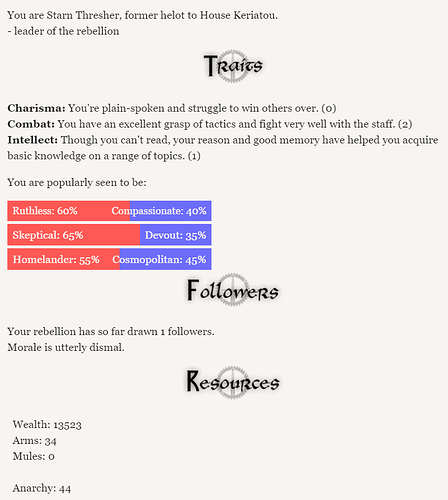 In Choice of Magics of course, there’s very few “happy endings,” so every run kind of “fails” in a way.

In The Lost Heir, in the last scene of the last book you can be completely consumed by your demonic side and wind up abandoning all your friends, your lover and your child alongside your entire kingdom, likely for most of them to die. You can be a martyr and die for them all too, though that’s more bittersweet than failure.

In Heroes of Myth, you can be thrown in prison, die, etc. All kinds of horrible fates.

In Créme de la Créme, you can be kidnapped, and though I haven’t tried it yet, I’m pretty sure you can fail to escape the prison camp you’re sent to.

In Community College Hero, you can fail to save two characters, your teacher and one of your friends. Whether you like those characters or not, as a hero, that’s a massive failure.

In the Versus series, you can get voted to die in the arena if you fail at your objectives.

In The Last Wizard, you can lose the final battle–and the final stronghold–against a tyrannical empire, and thus doom that entire world for however long. You can also die, be held captive, get trapped basically as a slave in a realm you despise (depending on your perspective by the end/choices), etc.

In the Evertree Saga, you can be driven to murder and/or lose everyone you love. I haven’t tested it out, so I don’t know if you can doom the town to eternal torture in the sequel, but quite possibly as you seem to be able to run away at a pivotal moment. You can also die I’m pretty sure.

There’s a lot of other series and individual games I’ve heard have tragic or spectacularly failing routes as well; however, I can’t comment on those as I haven’t finished first playthroughs yet.

Let me know if either of these don’t count.

In Heart of the House, you can die but i could not remember the conditions to get that end.

In Tally Ho, if you miss the first train and and annoy Regina by not giving a proper codename , you get a special game over.

i haven’t tried it myself but i know that in “The Eagle’s Heir” you can get executed. There’s even an achievement for that.

Hero Unmasked! also has some achievements that, by the sound of it, are connected to you failing quite gloriously. (I haven’t personally seen them, need to do that one of these days)

Good mention of Hero Unmasked. I did have a hapless and unheroic Hitchcock-protagonist MC called Kaplan who was always getting captured, though revealing his brother’s identity to everyone was too much for me to swallow.

Getting shot by Victon after letting Jury kill Jenny at the end of Herofall was quite a fail, but that MC had it coming. Dino Poorbear from the comic Scalped irredeemably damned Amindian gangster, is almost my only MC I can call up if I need a real villain.

Granted, the identity reveal is a choice you make, not a skillcheck, so I don’t think that counts as a fail.

A traditional tragedy should be caused by choices stemming from a fatal personality flaw; like refusing to marry anyone and getting a fiance smelling of goats in Choice of Romance. The instant death skillcheck endings in that game would make an anticlimax to any book or movie if the MC had fielded all previous threats, unless they had a compelling reason to use the wrong skill or cheat on the monarch.

Kaplan consistently getting captured made for more of a comedy; Hero Unmasked is more light-hearted generally. I couldn’t think of a satisfactory reason for unmasking when it would hinder the twin as a superhero. A ‘failure’ perhaps, where a brilliant footballer misses a vital penalty or the gambler rolls a double one, would be senseless and unsatisfying compared to a tragedy, though tragic in another sense. I prefer COGs and stories to give some order and fulfilment to the world.

In Herofall, I assumed that treating Prodigal badly as possible would justly ensure a bad ending, but you needed Hero Points below a threshold as well. If you could treat Prodigal a bit badly and still win, I’d say that was unnecessary; the greatest hero can be brought down by mistreating that one fateful character.

The entirety of PsyHigh was a failrun for me, when I first started playing. To my defense, it was my first interactive book, and I had NO IDEA what I was doing. But like, NO IDEA.
I failed so specatularly I got an early ending - I don’t remember it with details, but my character was unpopular as hell, and did all sorts of wrong choices, no one wanted to help him, and I think he even got arrested and thrown into jail. That was… well… epic in it’s own way. And in the next run I got a horrible ending where he and his best friend survived, but all the baddies remained free and the future was bleak and awful
At that point I decided I hate this game and that I’ll never play another interactive novel haha. Fortunately, I’ve still tried Choice of Pirates later, and well, while not the best, it’s still entertaining, and WAY easier as a first game of the sort.
Around 15 novels later, I’ve replayed PsyHigh and aced it. I enjoy it a lot now.

I also had these failruns in Runt of the Litter. My character ALWAYS got killed literally at the doorstep of his destination, and NOTHING could ever help me.
I didn’t like that one a lot though, so I just left it alone to rot in my steam library, never to be redownloaded.

I tend to try and do all endings when I play visual novels, but in visual novels you can save anytime, so that’s fine. In these interactive novels, it’s too tedious because of the lack of a save system, and I’m too lazy to do entire runs to just fail. So yeah, at least my failruns are 100% organic and unintentionnal, for maximal annoyance XD

You should check out the Fleet for its failruns.

You can mess up a fair bit in Psy High, I remember when I kept getting arrested as a bomber because my character had no subtley and high magic. Which also wins an award for being punished for having a stat be too high rather than too low. In future playthroughs I tried to spread my stat bumps out a little more to avoid that.

Did you play PsyHigh 2? Haven’t purchased it yet, and I’d have to replay the first one before starting the sequel, I think. But I wonder if it’s any good. I mean, I didn’t expect a sequel to that game, since the good endings I on my second attempt at the game seemed like fitting endings.
Well, I guess awful failruns ARE possible in the second game too, and I dread that.

I didn’t think you can actually have issues because a stat is too high XD - didn’t happen in my failruns of the game.

I have played Psy High 2 but not as much as the first game, which reminds me I really need to explore it more. But from what I have played of it, I didn’t hit any amazing failures, not to say there aren’t any, but I didn’t find any. You can strike out when dealing with the kids in your cabin, there’s an early choice where I tried to be cool so the kids would like me and they basically responded that I was a loser. You can also have a bit trouble with the ending, I had to restart when one of my choices basically doomed the whole summer camp.

But overall, I think you should go ahead and play the second one, it’s a blast and I didn’t have too much trouble getting a good ending.

I didn’t think you can actually have issues because a stat is too high XD - didn’t happen in my failruns of the game.

Neither did I! I had to look at the code to figure out what I was doing wrong. I tried before the play, during and after and every time i was getting accused of being a bomber! So finally I figured I either needed more subtley or less magic if I wanted to avoid that.