I’m going over the coding for my WIP’s character creation segment, which is much more convenient to do ever since I isolated it into a separate file from the rest of chapter one. Ahem. I digress. Anyway, I was looking it over and examining the possible paths for the four personality axes I’m using. It occurred to me that I can guide the player into creating more “consistent” characters, by marking out (disabling or hiding) options that conflict with the traits they’ve already selected.

Example: if the player has already stated that their MC is “manipulative”, the option to then call them “guileless” (which reduces the manipulative trait by 20%) would be grayed out or otherwise unavailable.

On the one hand, this restricts the player, and players on the whole resent being restricted. Especially the extremely dedicated players that visit this forum habitually and play demos (this is a downside). On the other hand, it could make it clearer to the average player how to create a well-balanced character (this is an upside). On the other foot, it blocks the ability to try and game the stats by selecting a trait and its contradiction, and trying to maintain a neutral-statted character that the game wasn’t designed to handle (I’m unsure of whether this is an up- or downside).

I haven’t 100% decided on how to proceed. For my own testing purposes, when I go through the CC with the restricted options it helps me a lot. But I know there’s a chance that some of the people who played my first demo will be blocked out of repeating the choices they took the first time around. If I make the change, I’d like to do it as early as possible for that very reason. Also, because it helps me to visualize what I need to do to balance the stat checks in later chapters.

Mhnn… I would say it depends:

As per your example, a character prone to be manipulative would not be innocent.
But a manipulative character should still have the options to be honest/innocent later in the story, as people make decisions based on personality and the situation they are in.

Maybe have it that if a manipulative character decides to be innocent/honest at a crucial point it backfires spectacularly?

Likewise have an honest character, maybe, be so hilariously bad at being dishonest that it wields unexpected results?

I should have phrased myself better. I’m not going after “character arc” style personality changes. I mean specifically within the context of the character creator. What I’m wary of is players (accidentally) selecting an option that gives +15 manip, followed immediately by one that gives -10 manip. Or something along those lines. That’s not how the personality traits are meant to be used. Ultimately, I want that at the end of the CC, the player will have non-balanced at least three different personality traits out of the four.

Not seeing your character creator, I can’t say for certain what the best way to go is, but I would err on the side of guiding the player to create a functional character within your game. I don’t mind being restricted a little while establishing what my stats are–and it would make sense that I wouldn’t be able to say “ah yes, behold Frank, he is a master of the fine art of deception and wordplay” and two choices later go “lol nvm.” That’s very different than later on in the game not allowing Frank to have a uncharacteristically genuine moment of honesty, which could be motivated by a lot of different things, and is the kind of restriction players are generally a lot more against

I find that the opportunity cost of not increasing your other stats when you increase another is more than sufficient. Reducing another stat on top of missing out seems needlessly spiteful to the player.

Just curious. How do you handle this “4 personality axes”?

Does the player tune out their percent stats? Or do they have to choose from a list of traits?

I find that the opportunity cost of not increasing your other stats when you increase another is more than sufficient. Reducing another stat on top of missing out seems needlessly spiteful to the player.

It’s an opposing pairs stat. Reducing it isn’t a penalty, it raises the other stat. Part of how the personality system works. 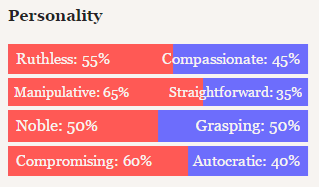 I actually like restricted options like this, for role-playing reasons mostly. Even later in the game, locking the most extreme opposite choices is something I find very interesting (e.g. 90% compassionate MC can’t murder this annoying guy in cold blood, they can at most kick their shins).

I often restart during CC realizing I made mistakes or not focused enough on a certain stat, so I’d say greying out opposed options is helpful. I think even if people would be confused by it, they would naturally restart and try other options to test it, so it should at worst familiarize them with the stats at the cost of some frustration.

I ended up tweaking some of my earlier personality options, because otherwise I ended up with edge cases where by the third question, there was only one available answer. It’s not supposed to go like that. Besides, that would obviously look restrictive and arbitrary to the casual player, even if the “problematic” questions were the less popular responses.

So, on the whole, I gained a great benefit from this thread because it helped me tweak my character creation process into a shape I find more acceptable.

Personally, I don’t mind restarting CC a couple of times (as a player) if I realize the options I selected don’t mean what I thought they did. That’s why I prefer CC questions do be grouped closely together at the start, rather than being more scattered.

When it comes to personality traits locking people out of options, I’d prefer to let them choose the “non-optimal” response and see the fallout for themselves, rather than making the option non-available to start with. Currently I have one such inadvisable choice that has… quite interesting fallout planned.

I am a role player not a meta gamer so consistency in personality shouldn’t gate choices. Why? Because that’s not like people working.

A greedy person could be charitable because many reasons. Maybe wants romance the npc. Or want a favor from him o simply because a character could and should always a possibility of evolution.

As role player i like change personality stats during playing to simulate conflict and traumatic events .

For instance imagine that greedy character was about to die because a stat check failure. And someone saves him. Maybe the event makes my character better person because has seen that is good people in the world.
If you gate me choices i can’t evolving, that way i will always be greedy. What i could understand is there is flavor text were nobody believe pc because conflict with what they acted before but I should have a opportunity to evolution

Although in TDUP there aren’t actually any personality stats. Aside from alignment I guess. Whoops.

Morality is not just internal, though. It’s a form of trust. Past a certain point, you’re irredeemable because no one will trust you.

But tge option to choose that and try to redemption should be there even it fails. If not pc is plain, and boring. If all choices are preset because a random number I choose 20 chapters ago when my character was a kid and now is 35 and is blocked from any changes well what is the point of a choice of game

you’re irredeemable because no one will trust you.

Ah, this reminds me with… not necessarily a trope, I think, but something like “you crossed the moral event horizon and realized it. Will your devotion to fix it be welcomed, at least?”

@Szaal I think people are much more forgiving of fictional characters than they would realistically be of people who harmed someone they actually know. That’s part of my issue with redemption narratives.

Well, I mean, my Darkness’s Champion is basically Lancelot that turned on his heels and sold his soul, slain nearly the whole Round Table knights.

I think people are much more forgiving of fictional characters than they would realistically be of people who harmed someone they actually know.

Having met and become close to people on both extremes of this issue (the ability to forgive those that harmed them) I can say that there can be the case of forgiveness, even if the person wronged the forgiver to the nth degree. The opposite I found can also be true; forgiveness will never be granted, even for the slightest of harm done.