I’ve checked how the persuasion roll is calculated if the dice rolls are deactivated… and then reported a bug with the calculation of the relationship based persuasion check to the author. It currently seems to be bugged, sadly. Your best bet is to get the 80% relationship. Is there any specific character you’d like to romance and need some tips? If it’s one of your crew members, you can get a nice boost by giving them a good amount of your share of the loot after the heists.

How to win the grab race:

When you get to the donut store and get to choose how to deal with the cops, choose to “Stick ‘em up” and pass the intimidation check. In any other scenario, the car will be too damaged for you to win.

You’ll have to ask MichaelMaxwell why the DCrange for Mouse is higher than for the others. Mouse only has a crush on the MC when the relationship value is at least 80%. When it’s below that and you have to pass the roll, Mouse probably still sees you as just a friend, a very close friend, and is more reluctant to take the jump into a relationship? Not wanting to destroy the friendship or something like that?

Can we romance Reville in the second book? He flirted with the NC in the first chapter so I’m curious…

This hosted game is one of the best I’ve read, everything from the humour to romance, it’s 100% in my top 3. Played though it multiple times and it satisfied me as well as leaving me wanting more, cannot wait for the second game​:blush:

Update 2020-01-07: All romance / approval guides are done, the achievement guide is complete.

It is almost finished. The only thing missing are most of the romance achievements as I have to write approval guides for them.
All hidden achievements are added, there’s an elaborate guide for the $500,000 achievement, and a guide how to side with the Archangels in chapter 4 if you are an informant or undercover cop.

The romance / approval guides for Gabriel, Raquel, Justin, and Mouse are done so far.

Obviously, there are spoilers.

~ Overview ~ Achievement Guide for the interactive fiction game “Breach: The Archangel Job” by Michael Maxwell & Ben Luigi. The guide is put together by Sylveranty. Note: If you have cheats activated, you won’t get achievements. The romance...

@CreoleGuy519
You can find extensive tips for Gabriel, Raquel, and Justin in the guide above. I’ll add the other characters throughout the day as I finish them.
Update 2020-01-07: All romance / approval guides are added now.

So I was playing as informant Hayne was RO and when Michael shot MC I shot him back and Hayne was injured but after waking up in the hospital I couldn’t ask Reville about her because it just moved to next scene . So what really happened to her?

Every injured RO that is not Mouse will be picked up by the Archangels. They treated them. There’s been an update to the FBI route where MC gets to read a few reports about the Archangels, and everyone seems to be alive.

@Matha
About Reville: Yes, as far as I am aware the current plans of the author are to add Reville as a romance option in the sequel.

On the discord server, the question came up if certain Breach characters appealed more to people of a certain gender than to others. We decided to make a poll about it. It’s basically also another poll about the favourite romance options. Polls are fun!

Here’s the link to the poll:
https://forms.gle/4m8N2T3Hv8GFXGRJ8

And here’s a link to the results:
https://docs.google.com/forms/d/e/1FAIpQLSfwvXCf66ZwWfnVUlHUkeJHRW48JgIgx8AM130I93KrEJpAFA/viewanalytics

Kaidan 3rd most popular for girls at the moment, as he deserves

I know I haven’t replied in awhile but I have been watching for quite a while. Thank you so very much @Sylveranty and everyone else for helping answer most of the questions here.

The form actually really helps me in understanding how to treat the romances in the 2nd game, so if you haven’t, feel free to weigh in your votes for your romance options in the poll by @Sylveranty up above.
BREACH: The Archangel Job - (Released! | Discussion) New Discord - #5709 by Sylveranty

Speaking of which, an update on what’s currently going on.

the sequel to this game, Breach: Chicago Warzone, will be coming as a very very short WIP somewhere in the end of February, or, if I’m still too goddamn stressed out in writing, most likely in March.

Whenever it may be, it’ll be a month earlier for patrons for preview before it’s released to the public, and then it’ll go through the same process that this game went through, both public and private testings and all… As for how long does it take for me to finish the game… please… don’t ask… I don’t know. I’ll do my best.

P.S. I am so very happy and surprised at the relative equality of the genders of those who’ve voted on the poll. Long ago back when this game was just starting out, I would’ve expected this game’s audience to be a generally male game due to the genre, but overtime I think I’ve grown used to writing for a broader audience… I hope…

In my opinion there are female>>>male audience/reader in number. I can’t prove it but it is what my instinct is telling me.

I think this is very true AND I think your ability to listen to feedback and then make positive changes to your game based on that feedback helps. 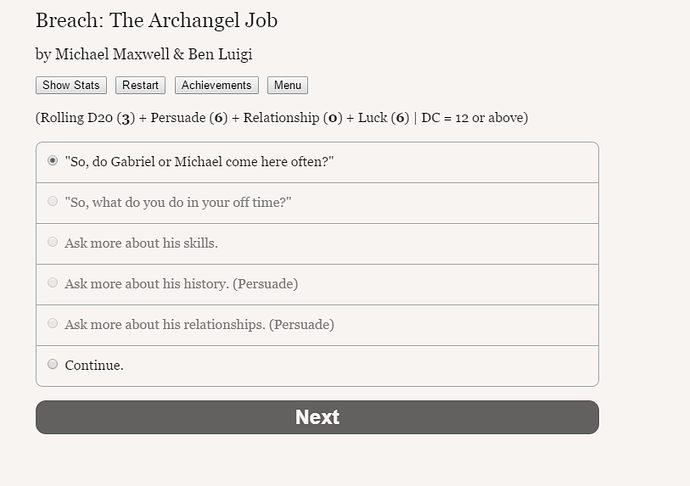 I had that same bug when I first played through. I thought that was fixed in the latest update though

This… That was something. I finished it but I want to play it again. There are still so many things to discover!

It’s 4am already but I want to congratulate both of you, the persons who contributed and the existence of this thread. It was a really enjoyable experience.

But really, I like your work too much.
I was really involved in all the events, I really felt like I was part of the family.
I love Mouse, the main trio, the group, the tacos buddies… (best guys). They’re crazy but they’re more than worthy of my love. I want them to be happy.

That’s exactly why I’m hesitating to betray the Archangels… This name suits them so well. Uuuh I’m weak ?

Oh ! I don’t know anything in coding but the dice system is cool as hell. A bit stressful for the sake of my heart sometimes haha

You’ve done an incredible job, really. I will be happy to read you again! ^^

Wow, I just got to the event where Mouse gets the file of Gabriel and the other archangels. There’s even an option to find out their true identities when you get home, but the text of “But if they ever find out, it wouldn’t end well for you, or Mouse.” spooked me from going through it. Does it really have that bad of a consequences (regardless of their relationships stats to the MC/romancing one of them too maybe)?

I would like to report that I failed to romance raquel even though i have 97.5% relationship with her. Is this supposed to happen or…?

I would like to report that I failed to romance raquel even though i have 97.5% relationship with her. Is this supposed to happen or…?

If you fail the persuasion roll then yes.

Does anyone know how to romance Kaz I have him above 80% but it doesn’t give me the option & I’m playing as a female.