The Chosen One™ sits by a campfire, holding his palms out to catch some warmth from the flames. A breeze ruffles his curly brown hair. For all that he looks like an ordinary human, he’s the Hero of Prophecy, the Lightwielder, the orphaned farmboy destined to save the world from the Night Lord’s tyrannical rule.

And I’m the one who’s going to kill him.

–
I AM NOT THE HERO is an interactive fantasy novel featuring clichés that are more than they initially appear. The main character navigates an increasingly unrealistic fantasy world in which their every choice seems to send the world further and further into chaos—which may or may not be a good thing.

Hello~
This demo currently contains chapters 1+2, and most of Chapter 3. It sits at ~36000 words (excluding code), with an average playthrough of ~12 000 words. I’m really looking forward to hearing what you think!

Fair warning: this story is told in first person, and there are no numerical stats. I want the story to read more like a novel than a game, with plenty of narrative variability but few stat checks.

You can read the demo here:
I Am Not The Hero - WIP

Any and all feedback is appreciated!

I like the topic and your writing style. Gave me a good laugh here and there. I am more than interested in the evolution of this story. Will keep an eye out for this.

This was a fun read. I also found the concept interesting. Good work, I’m certainly looking forward for more.

This was a very fun read! I especially liked the humor and the topic presented here! Can’t wait for more!

This is an awesome read. I never expected something like this! I cant wait for more chapters.

This is very fun. I really enjoy the humor and it fits well with the story. Its nice to be a secondary character rather than being burdened to make choices despite and its refreshing to just enjoy the story. the story for now presents itself with a lighthearted tone and how you handle the cliché stuff of the story is not too much to just make me groan in annoyance. cant wait to see how you’ll go on with the story.

i noticed one of the lines repeat.

cool story you got here, especially since we get to play as a bad guy. not even the main big bad either, but a lowly (or elite ranked i guess) minion! can’t wait to backstab the chosen one and his little band, maybe it’ll get us a promotion from the boss or something. (there will be a route to stay on the night lord’s side while pretending to join the party and actually kill em, right?)

I like the story. Keep up the good work

I really liked the writing. It was surprisingly neat and I loved the little tidbits breaking the 4th wall. One request though, is it possible you can add save slots. There seems to be enough variation and I want to experience all of it so having the save slots will help immensely

Save slots have been added! It should work (let me know if it doesn’t!)

Okay, so, this is an INCREDIBLY… cute(??!) game! I adore the MC - the very concept of this dorky fourth wall breaking Voidborn who for some reasons engages in heroics and helps his enemies (since I go for that path) is incredibly endearing.
And as always, I’m incredibly grateful for the first person narrative!

Honestly, I admire this game and the writing, cause I tend to hate fourth wall breaking or meta commentary, but somehow it works in this story. And not only that, but I’m also never interested in possible romance with female characters (only male and rarely NB), but man I fell in love with Inya the very moment she appeared… So yeah, that’s literally a first for me, and I DID play literal dozens of IF games!

I see you added save slots, so that’s nice - since it was the thing that truly bothered me while playing (I guess they were added while I was playing, but I would have needed to refresh to actually have them).

I’m also not a huge fan of relationship increases or decreases with characters before they appear, but since you said you’re not even sure you’ll keep that at all… eh

Okay so, that aside… I’m really really in love with the game, and I would love to draw my MC, but for that I need to ask a couple of questions about the Voidborn appeareance.

Haha, sorry for the interrogation!

Real good stuff. A fun read and the genre twisting comedy was spot on. Good job!

Sounds interesting defo be a cdrama type one

Love it, I read many Ifs and I’m sure this one is in my top 10 -bookmarked-

I like that we are not the good one, it’s very tiring to be always the hero of the story haha, hope that in the next chapters we can use our shapeshifting power, I really like it, looking forward for future updates

I’ve enjoyed this one and look forward to seeing what comes next other then the one error I’d a duplicate sentence that’s already been pointed out nothing jumped out at me needing fixing.

So good job all around to the author

Well yeah, I have a certain vision, but I want to wait to see if the author will say otherwise

I mean, maybe some elements I had envisionned are in opposition to things that will only be detailed later or otherwise important things, so I prefer to know before I actually draw

This really made me laugh

I thought we would be playing as the main Antagonist but playing as a (probably elite ranked) minion is still pretty neat. 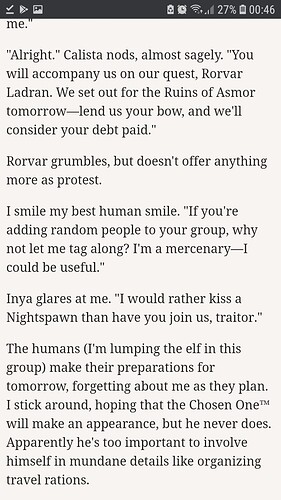 I think he shouldn’t have the money on him after that and I guess when I told everyone that he was the thief shouldn’t he say that I took it from him afterwards? (But sorry mr.thief, I doubt anyone would believe you after the shit you pulled)

This is a fun read! Looking forward to more of it!

Damn that was pretty fun to read, though you’ve probably already heard that statement 3 times now. Keep up the good work