Difference between choice vs fake_choice

Just curious. Is there any real difference between putting " *choice " as opposed to " *fake_choice " ? Does one change the page in a different way or show up differently than the other? For me it appears as though they are virtually the same.

Any help would be appreciated. Thank you.

a *choice requires directions for each choice (e.g - *goto) whereas a *fake_choice doesn’t. In a *fake_choice, it will just continue to the next thing outside of the paragraph of that *fake_choice. Not really a lot of difference.

Ah ok. That makes sense. Thank you for that!

Also beware of nesting *fake_choices, I heard it causes buggy behavior. So if you have a long nest of many choices inside one another, it’s best to use *choice.

What @ElvesForTheWin said about the *goto is true. However, it is possible to remove the requirement of *gotos on *choices, *elseifs and *elses by using implicit control flow.

However, it is possible to remove the requirement of *gotos on *choices, *elseifs and *elses by using implicit control flow.

Uh…what? lol what is that?

In CS each option of a *choice must end with a *goto otherwise it will throw an error. This also happens when *elseif or *else is used. You will get this error if you do not use the *goto:

Implicit control flow is an optional setting you can use to disable this error message, allowing you the option to use *goto at their ends or not. I like it because it removes the need for redundant *gotos and *labels after the *elseif and *else.

So imagine you want to do something like this:

On CS it wouldn’t work because of the requirement of having a *goto at the end. You would need to do this:

As you can see, that’s redundant since the code could just continue down. By using implicit control flow, you don’t need to add this *goto and *label, the first example would work.

Thanks to a big code contribution from @kgold, there are new features to try in the latest version of ChoiceScript up on GitHub: implicit control flow and *gosub parameters. Implicit control flow Normally, you have to use a *goto before the end of a *choice #option or before an *else, or you’ll get errors like this: It is illegal to fall out of a *choice statement; you must *goto or *finish before the end of the indented block. It is illegal to fall in to an *else statement; you must *goto o…

“…Is it possible to learn this power?”

Uh…like it was said on the thread I linked, just add this at your game startup:

Enjoy no more redundant *goto/*label pairs, but be mindful that this also removes the requirement on *choices too, so if you wanted to actually include a *goto in one of the *choice options and you forget, there won’t be an error message to remind you any longer. But thats the only con really.

Sorry. It was a sad attempt at a joke

Enjoy no more redundant *goto/*label pairs, but be mindful that this also removes the requirement on *choices too, so if you wanted to actually include a *goto in one of the *choice options and you forget, there won’t be an error message to remind you any longer. But thats the only con really.

Thank you kindly good sir. You’ve done a great service and cut down a lot of time for me.

“…Is it possible to learn this power?”

Don’t worry my guy I got it 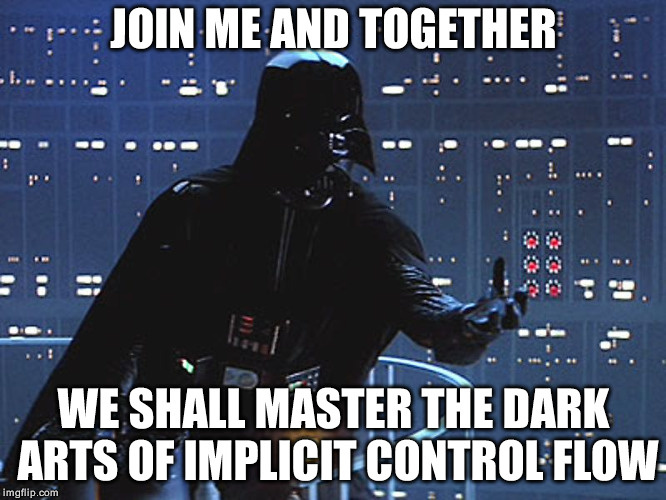 AG, stop trying to make implicit happen. It’s okay to use for testing, but in a published thing it only causes trouble. D<

Doing anything implicitly makes it easier to do it by accident and end up with something that’s wrong but doesn’t crash.

Doing anything implicitly makes it easier to do it by accident and end up with something that’s wrong but doesn’t crash.

implicit skips odds and ends that randomtest etc might stumble over and the like. having it activated upon publishing can easily cause chaos due to a variable that should not be empty suddenly being empty and the game skipping straight to the end (who was it again who had that happen?)

I think you missed the part where I said it was optional and mentioned the “con”.

The only problem caused here is if the author makes the skeleton of the choice and then later forgets to put whatever he meant in there. And then the code simply follows down. You’re blowing this way out of proportion, it simply behaves as a *fake_choice, it won’t cause the universe to go boom.

This isn’t about “trying to make implicit happen”, the meme image was just a joke. I’m just telling them about it in case they prefer it that way; when I programmed in Java there was no sort of thing like this *goto requirement on *elseifs/*elses, and now it’s a lot better for me when I found out I could get rid of it. If you don’t want to use it that’s fine, but there’s no need to come saying it’s wrong to tell people about it so they can make up their minds if they want to use it or not.

And I don’t even mind about the need for *goto after the *choice. Just the one after *elseif and *else that bogs down the code. Many programming languages don’t use this sort of thing.

Also, there are CoG games published that do use implicit control flow; just check Choice of Magics code and you will see it turned on there.