I forgot to resolve this, but as I make bug fixes and content updates, I can add something to address this.

as in puddles getting removed? Did i just kill an imaginary animal? OMG WHAT HAVE I DONE

If you skip watch duty, it can lead to a loss of morale or relationships with some survivors.

Yes, you are the first person point to point that out, or maybe the first time I have read it. 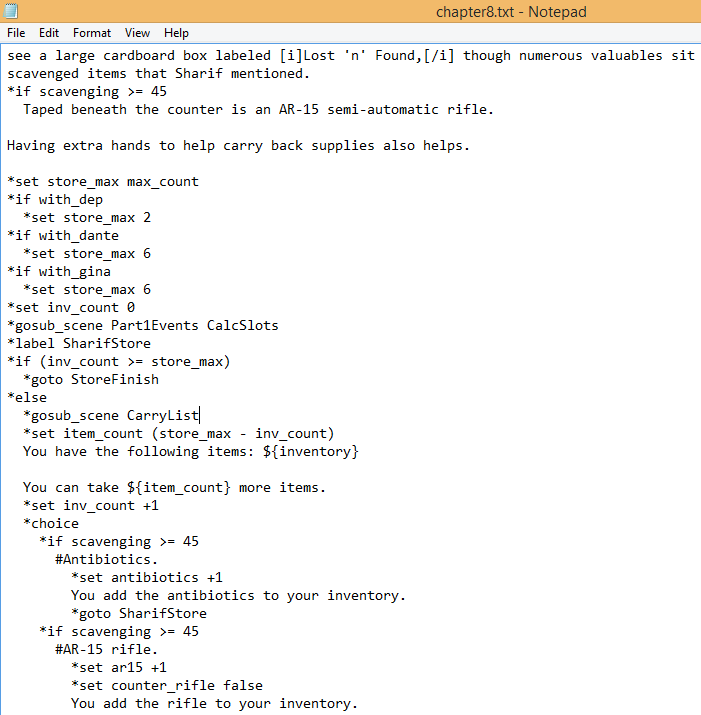 This has been debated sometimes. The dependent and the pet are both challenges, so I really don’t want to give them more benefit to the main character. There would be no downside to having them if they contributed greatly.

But I mean, in later episodes the dep does help u scavenge more, like in sharif’s case. Also there is this part: “Huskies enjoy vigorous work, such as pulling carts and sleds or carrying packs.” With that someone would expect for the dog to be able to help in scavenges, like for example crafting some kind of bag and adding it to the dog which will let you scavenge more stuff maybe? I mean I get what you mean, they are supposed to be challenges and all, but this way it is kinda less realistic. The challenging part should be more like “They are hard to take care of and can die and pace you in danger” rather than having less benefits. Like Clementine from telltale walking dead season one, you feed her, teach her, protect her, but she can get u killed in certain circumstances. The nature of these two challenges is different with the rest, so while i agree that they should be actually challenging, the benefits should be there as well.

Also, just remembered something. It would be nice to see chandra join the group if you save her in the interview.

At least in chapter 1, the husky does help you by finding extra stuff.

does it? I do remember something like that but I think Jim might have removed that cause i didn’t see it in the code. Might have missed it though. From what i see there’s no actual difference between husky, wolfhound, etc in the game

oh btw is there gonna be a bugfix update any time soon?

There’s definitely a bug with the Watchtowers. In the menu where you select which improvement to build, both of the Watchtowers remain there aftr you already pick them (though they are added to the list of task properly).
But then as you assign people to these towers (Gina for example), Gina’s is properly listed as "Gina–watchtower (north or south) setup BUT the Assignment list on top of the page still said there are 0 people assigned there.
Then of course, it didn’t get completed when the next progress report come in.

Which file is this in?

those two are the file names

Hm, may I ask where these files are? I am playing the Steam version and don’t know if it is any different. I looked in the steamapps > common > ZE Safe Haven but can’t find them. Sorry for the noob question.

honestly im not sure. I think you should open the exe file as a zip or smth? there were stuff about it somewhere in the forum

alright so, in the premades there’s a sylvia stone that is 18 years old, has kiled 79 Zs and has a humanity of 48. This info doesn’t really make sense to me xp you lose humanity for each kill in chapter one and you are telling me a TEEN killed 79 and is still feeling human?

When conversing with Bailey on the ‘converse with other survivors’ bit on part 3, the mc’s choices indicate them not having had any romantic experience with her beforehand. I chose her as my romance partner in part 2 and they had both acted as if I did before this choice.

[I take her hand in mine. I didn’t realize she liked me but would like to explore a relationship with her.]

After madison’s party in part 3.

[Stay with Gina but change Jillian for Jillian.]

Some extra bugs I noticed:

Some of the construction projects (ex: Chicken coop) keep reappearing in the planning tab even though it was build previously. While you can select to start it again, it cannot actually be assigned to your survivors. So now in the Junkyard Reference it is forever stuck as (Built & Active) (Under Construction). It doesn’t affect gameplay, but does may cause confusion and cluttering.

Another bug that DOES affect gameplay, however, is the ACOG scope.
After you have the Improved Workshop build, you can craft these upgraded scopes. However, after making the ACOG scope, the next time I was asked to switch loadout, the prompt to equip these ACOG scopes don’t show up (it just ask me if I want to equip the regular scopes after the Suppressor prompt). I took a look at the save file and found this:
“pepper_spray”:3,“acog_scopes”:2,“scopes”:2,“suppressors”:3,“acog_scope”:“0”
There are two of them. One with the (s) and one without.
After changing the singular one’s value (acog_scope) from 0 to 2 and re-open the game, NOW the ACOG scopes show up in the inventory (yes, in Inventory and not Gear like the regular scope and suppressors, so that may need a fix too). The game also properly ask me if I want to equip the ACOG instead of regular scopes now.
Essentially: By crafting the ACOG scope, the game add a number into “acog_scopes” but only recognize “acog_scope” as the real factor of you having them.

Last note: The Inventory need an overhaul. I found that quite a few items (including ones I listed above) are not registering into the inventory screen. You still have them, but it doesn’t say you have them. This is especially true for many of what I would call a “Key Item,” as the text elaborate how your character pick them up, but is never seen in the Special Inventory.

@JimD nvm i got it

Thanks, I’ll fix it.

Some extra bugs I noticed:

Thanks for reporting all of these.

The pet is always male.

So regardless of what your player’s gender is [my current run has me do a female MC], the pet is always male. Damn bruh.

Hi, Bug in part 3 : Whenever you plan to construct the Watchtowers (North & South) and subsequently assign members of your group to build it and occupy it. It doesn’t register.

Not only does it not build at all but the plans for it just sits there, “Under Construction”.