Zombie Exodus: Safe Haven — Part Four continues your story as you leave the Silverthorne Militia’s camp and return to the junkyard.

This is the discussion thread for the release of Part 4. Please ask questions, leave comments/reviews, report bugs or errors, and suggest additions to the game in this thread…

Congratulations, I started playing part 4 and the game continues at a high level. Early on in the game, when Jaime and Sean start arguing, I choose to stop the fight, and even then, a few scenes later, Jaime shows up with his hands hurt from hitting Sean and like I didn’t stop before the fight started.

Gina, Gina, Gina… I gotta say, I like the change, or at least the little bit of it. Though naturally, same ol cougar with same old drive of insatiablity.

Haven’t had a chance to look at it in detail, but I did notice a couple of things: Firstly, August is called Alex a couple of times. Secondly, there’s no option to tell him you’d be interested in romance without saying you’re already in a relationship (whether you are or not). Shouldn’t there be an option to say something along the lines of “I’m not dating anyone right now, but I am looking for a relationship.”?

Also, I think August might be getting the short end of the stick with deaths, as he’s the first character checked, but he’s almost guaranteed not to be the MC’s highest-relationship character, so if anyone dies, it will be him if he’s there. This makes it a bit hard for a teen player to try to romance him (since someone who wanted that would probably have invited him along). Would it make sense to skip his death and go to Fred instead for teen MCs, or at least if august_like is already 1?

(EDIT: I note that the CheckNPC subroutine does check for august_like above 0, but will replace him if any other characters have higher relationships since, again, he’s checked first.)

You give him a quick pat on the head, and him and Mishy she run off towards the parking lot.

You point at the and say, “This is your whole gang. I can tell you are lying just to get Thelma to let you go with Kevin.”

Brody takes one of the pails and tosses the water from it onto the flames While they work, Tommy rushes inside at a full sprint.

Put a full stop after the bolded word.

Coding error, in the choice: “Take the off-road path. The ${vehicle} can handle it, and we will catch up to the bandits much faster.”

Though the off-road path looks uneven and bumpy, this motorcycle should be able to handle the rugged terrain.

My vehicle is Armored SUV.

I think the bolded word should be changed this code:

Also restrict yourself to smaller bills spread out during the day." 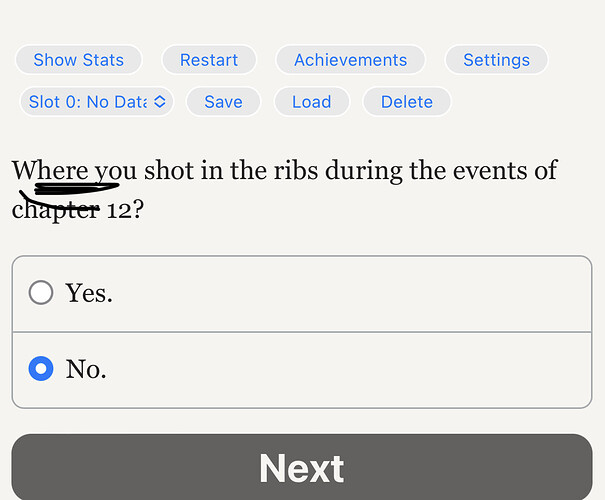 It is supposed to say “were” and not where. It also makes the same mistake a little later in the chapter.

ongratulations, I started playing part 4 and the game continues at a high level.

Thanks! I believe I fixed the issue you listed in your spoiler.

The aftermath is coming. I just wanted to keep the pace up and show that even when you are not at the junkyard, things are happening that you can’t control.

Haven’t had a chance to look at it in detail, but I did notice a couple of things:

I believe I fixed all of these issues and made the changes you suggested as far as August is concerned.

@Bugreporter thank you for pointing out those errors. I have fixed them.

It is supposed to say “were” and not where.

Thank you. I think I have caught these.

@fisheye These will be in the next batch of issues I fix. Thank you very much for pointing them out!

He is factoring in other factors, not just yours.

Would you be able to see her from the motorbike?

Not sure what this is supposed to be, sorry.

If you were closer, you could try to stop their vehicles or knock them off the road.

The first should be “groan”, but I’m not so sure about the second.

I’m… kinda with (pregnant) Jillian here. You’d think you could bring up the fact your bun is in her oven to Jaime and/or say you at least have reservations about going for Kevin because of it.

Probably during the aftermath. Personally, I kinda would like to talk about it firstly with Gina, and have the option of bringing her into the parentage of the kid, and then the rest of the group.

You get to choose whether you’re in the same car as everyone else or on a motorbike with everyone else following in the car. That section was clearly written for the car but still available if you’re on the motorbike.

I didn’t think that really fit the context of the sentence.

It does in the context of smoke lifting away from the hood/pipe. Term for it in that context is sail/sails.

Wow this is amazing and I will play this right away. I also hope the mc can finally meet up with Julianne in the upcoming parts of the story and I can’t wait to see the upcoming development from the survivors. Congratulations.

When i stop the fighting from breaking out between Sean and Jaime the option does it feel good punching Sean still appears even though it does not happen. As well the part even though i have high driving skills i still fail epically when driving down the mountain. And ain’t the armored SUV all terrain capable but in the game it appears to struggle going off-road.

Same. For some reason, no matter how high my driving skill, even after using different vehicles, I keep failing.

Part 4 already? Not that im not ecstatic. But, ive mentioned this in other threads to you.

Remember to take your time, dont burn yourself out, and take that time to add everything you want to. Your fanbase will wait, where as we want content fast we also want the series creator to be in good health, and 100% happy with his completed work.