I seem to have reached a dead end with me writing this particular part in my story. I read plenty of stories online and books, but none of them talk about the long term and immediate effects much.

I am basically writing an Empire that got transported to another world. The Empire is large enough that the resources it has is capable of producing everything it needs, they are not reliant on imports but exports. They were a very big exporter of goods, everything from everyday things to heavy industrial goods.

I did my research saying they would get an “depression” so to speak, but I have some problems writing them.

I would just like to know how long can a country last before total economic collapse, is the effect immediate, What are the steps they could take to prevent it or lessen it, could they just make new trade agreements with the new world they found themselves in.

That’s a very good question and the answer is complicated. It really depends on the economic system they use. An authoritarian government would have a good chance of keeping everything together by forcing its citizens to work, and a libertarian system might also thrive when entrepreneurs look for new opportunities in a new land. But an authoritarian government doesn’t adapt well to drastic change, and a libertarian society falls apart without clear direction.

There’s no real historic precedent for an entire country suddenly being cut off from all other countries … except, I guess, for New Zealand recently. In fact you could probably take a look at how different countries are affected by the Covid-19 pandemic. Borders closed, trade restricted — how did this affect them?

There are a few science fiction authors that have tackled this: This is most likely the closest that you’ll find to your specific scenario:

Jeremy Solter is a teenager growing up in the late 21st century. During the school year, his family lives in Southern California-but duri...

If you want to look at what happened historically, the following should get you started …

The Weimar Republic was Germany’s government from 1919 to 1933, the period after World War I until the rise of Nazi Germany. It was named after the town of

In the context of the history of the 20th century, the interwar period was the period between the end of the First World War on November 11, 1918 and the beginning of the Second World War on September 1, 1939. This period is also colloquially referred to as Between the Wars. Despite the relatively short period of time, this period represented an era of significant changes worldwide. Petroleum-based energy production and associated mechanisation expanded dramatically leading to the Roaring Twen...

The Russian Revolution of 1917 was one of the most explosive political events of the twentieth century. The violent revolution marked the end of the Romanov

This is a solid beginning to get you started.

Let me introduce you to a man named Boris Yeltsin. 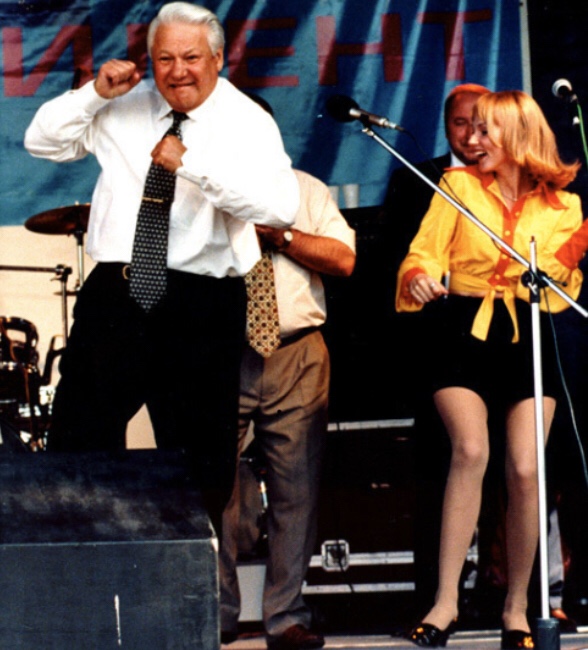 He represents what is essentially a how-to list to destroy an economy.

When a government controls almost all of the means of economic productivity in a country, rapid privatization can be a huge issue. When this occurs, huge industries that were previously reliable, regardless of how productive they were, can often collapse as they have to acclimate to a new control structure and new economic goals.

If the government really can produce everything they need, then what’s the harm if the leaders give/assign some of the means of production to their friends? After all, they work for you; they should be expected to follow your lead. This can often be disastrous, especially if their friends are unsavory people. This brings me to my next step…

No matter how economically productive something is, if it’s being funneled into one place, it effectively becomes useless. If, say, an industry want to expand, they sometimes just need to grease the wheels a little; this not only quickly creates irresponsible bureaucracy that can seep into other aspects of society, but can also create a monopoly based on who’s willing to go farthest. Finally, the final step:

Step four- no outside help

No matter how stricken with economic downturn a country is, it can always prop itself up if it has other country’s willing to trade with it or work out deals to prop it up. If, however, though it’s own fault or the fault of others, a country finds itself isolated, a bad economy is cause to panic.

All of these things combined lead to a perfect storm of economic meltdown that can be hard to climb out of. I hope this helps.

@Eiwynn Thank you, will check those out

@will Thank you, that is actually a good point, will be checking that out

@TheGhost thank you for the help, this helps a lot, just would like to ask. The Empire isn’t really fully authoritarian, it is a constitutional Monarchy, a federation of states mixing both private and Government control on industry, an open market.

I think it also depends on the industrial Level of the new world. Is it higher, lower or in the same level as the Economy of the transported country? Higher level would be a Problem, lower or equal would lessen the Problems. Are there direct neighbor countries, so that new trades could be established easily? If not Expansion and Exploration would be new job sources, so that the production could get slowed down, to Stop overflow of wares. It all depends on the Chosen setting. Also who leads the country, a scientific based leadership might improve adaption while a conservative one might struggle with new concepts.

Hi @Kaelyn, thank you that clears things up. In regards to the new world, it has a lower level, the world is roughly the same with medieval standards and the Empire that got transported there has the same economic power at the height of the 1920’s (minus the depression)

So there are countries in the new world, fiefdoms, kingdoms and other empires.

The Empire that got transported there basically became a new continent, so any new trade would come from the sea.

OK that sounds really interesting, has the country been on an own continent before? Then the change would not be that obvious and it already has ships. If Not or only some coastline before the Main Goal would be establishing a fleet to find new trade routes.
I would guess that also the science field would get a Push, to determine what is different in this new world and how it could be used. Once they find trade partners some of their advanced goods will be in high demand from neighbors. While luxury goods might Not have a demand like they had in the old world. Because the style or the need for them might Not be there, since most of them might be useless in medieval Standards.

The Empire is large enough that the resources it has is capable of producing everything it needs, they are not reliant on imports but exports. They were a very big exporter of goods, everything from everyday things to heavy industrial goods.

The Empire isn’t really fully authoritarian, it is a constitutional Monarchy,

I’m surprised that the Empire isn’t a fully authoritarian state with a strong central government that doesn’t share power with the federal states.

But let’s put that aside to answer your question of what will happen if a 1920 Empire got transported to a medieval world.

To put it simply, I think people working in the export sector, like factory workers, will lose their jobs. The financial sector like banks who gave loans to these factories will take a hit.

But all in all, the Empire should be fine. It can implement a strong welfare program to support the masses who will lose their jobs. Big Industry Companies who relied on selling export goods will be given a bailout. The Empire must be rich since it does not rely on imports and has all the resources to support itself.

The economy will probably still take a hit. But the Empire should not fear too much. They can expand to the medieval nations now and subjugate them. Medieval swords vs 1920 rifles, its pretty one sided.

Of course, the Empire could be the #1 Champion of democracy and human rights. So directly subjugated the medieval nations is out of the question.

But fear not, the Empire could always provide ‘loans’ to these nations. And should they fail to pay them back for whatever reason, its only fair for the Empire to demand a Structural Adjustment Program to implemented on these medieval nations.

Sorry, I got carried away there. The cynic in me took over.

TLDR: The Empire should be fine. Only a slight bump will be felt due to being transporting into another world. This my personal opinion anyway.

Hi @Kaelyn Thanks for the input, good points to be considered, yeah I am planning to write heavily on the export on goods and their scientist, as they have experience on it already it won’t be to much for them.

The problem they’re facing is that they were bordering countries before so any major highway and railway they have has been cut and rendered moot, though they are a major exporter via sea as well. Also when they got transported, it brought the country and its close vicinity, this means that a lot of the merchant fleet they have out at sea wasn’t transported with them, they only have what was at port at the time and their almost intact navy, but they have a different job.

@PrinceJackal, Thank you, I will be taking note of those points, and no worries I appreciate the time you took to write this, it would help greatly.

Yes the Empire isn’t fully authoritarian, the monarchy shares its power with parliament and consists of a federation of states, they also practice an open economy.

To give you a scale of this Empire, basically take the German empire of 1871 (Not including overseas colonies) The Austrian - Hungarian Empire, all of the Nordic countries (Sweden, Finland, Norway, etc.) and the Baltic states. So as you can see the resources they have at their disposal is quite massive. Heavy industry is also a major focus.

Also yeah I don’t want to write the Empire basically curb stomping everyone so easily, although fun to read at first doesn’t give much plot at the long run. I plan on making them fight a world that has magic in existence, basically science and industry vs magic.

So their opposition isn’t going to be entirely helpless but I am giving them an edge. They will have countries practicing magic sacredly and those that would have them power their Industry (Medieval Industrial revolution). So yes armies that possess magic weapons in large numbers made by their Industrial constructs powered by magic.

Still a work in progress so I have to make sure I get this accurate but fun to read.

I will be definetely looking out for your Wip, when you create it. The setting is quite interesting.

@Kaelyn Thank you, I can only do my best in writing it, it took me a year of research and countless of hours reading novels of similar settings to get what I want.

Plus anything I write now will have to rewritten with a friend to make sure I can get the correct choice of words in making it.