Great Game, though it’s in its early stages, I’m already enjoying it. You also right, there aren’t many werewolves interactive novels out there💯

Thanks, and no worries about it

After thinking about it, the MC would retain their skills and instinctively know things without knowing why. But I would leave it up to the reader if they wish to pursue further. Possibly with the aid of another character to help draw out vivid memories. Otherwise, you could just ignore your past altogether.

Hmm the skills and instinctive reactions are not exactly memories / knowing about their past. Assume I’d be doing everything that’s possible for my MC to actually remember, and that this would be my MC’s main goal - how long it would take and how hard it would be? And well, would it prevent me from pursuing certain romances for some reasons?

I’m very sorry for these questions! This is the big thing depending on which the game will or will not be for me, and the worst thing I could do would be to start playing, and then feel too uneasy to continue. I’d be attached to the characters, but unable to play because of sensibilities. So I prefer to really know what I’m getting into.

It doesn’t have to be your main goal, and I’m not planning to exclude romance options if you do not wish to pursue the MC’s past. I’m planning to make it completely optional. For instance, it’s possible for the MC to suppress their forgotten memories.

However, I will say that I’m planning to make part of the MC’s past integral to the main storyline. If you do not wish to pursue it, you would only be missing out on some information that might help you in the future.

That’s all I can say without spoiling what I have planned.

I mean, I WILL be doing everyting to actually pursue that goal - what I do not want is find myself in a situation where it would be too hard to uncover MC’s past / for them to remember. I don’t want for MC to stay in the dark, so this will be my main goal anyway. I was not asking if it would take too long because I don’t want to focus on it, but because I wouldn’t wish to spend most of the game with an amnesiac MC, since that’s what makes me feel uneasy - if it takes the entire game to remember (or if it’s easy to fail in that regard), then that’s not for me, basically.
But from the other things you say, I guess I will be fine?

For the romance, I was mainly worried that if MC wanted to uncover the truth, they’d HAVE to romance the character helping them that you’ve mentionned before. Or well, not do a romance at all. Basically, that focusing on remembering would take the time that could have been spent with other characters, thus preventing other relationships from progressing.

But anyway, I’ll try it out! Thanks again for answering. 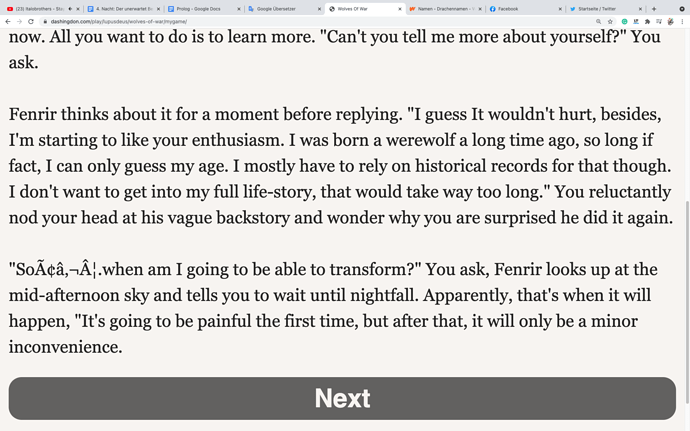 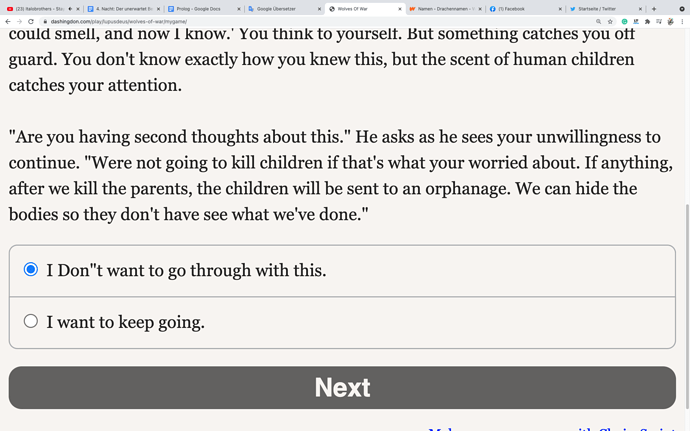 For some reason, I keep getting the strange letters after using multiple periods to signify a dramatic pause. I’m not sure how to remedy this issue, so I’ll just use commas from now on.

If you’re writing in MS Word, or a similar app, it may be converting the three periods/dots onto a single ellipses character (which is unique to that program).

Let me know if you have any questions or find any bugs/typos in this new update.

Looks interesting so far, here comes the but sorry, after Fenrir took us to the town, another character kept referring HE to my female MC, sorry didn’t catch the characters name.

Can’t take a screenshot as I am on my mobile and in work.

I’ll take a look at it. Although, I’m almost positive that the coding should be correct.

Think I’ve encountered what they just mentioned it’s the lord etu character he refers to my female mc as young lad
So far every following screen when asking the offered questions that text block of when he points out the female guard whom I assume we are suppost to be asking the questions it has this lord etu pointing the female guard and calling us young lad Everytime.

Thank you, I was looking for an error in the coding. Turns out it’s just a typo.

Maybe a option to save the game?

I’m working on it.