I didn’t even went with Skoll this time, I chose Fenrir directly, my first choice to spend time with but…

Oi @Phantmwolf found these on the outing with Skoll…

It took me a while to fix everything because I had to write an additional scene. I will update the game in a day or two after I make sure everything is working properly.

Edit: The game has been updated.

Just a quick progress report. I plan on releasing the next update around the end of this month or early next month depending on how much work I get done in the next week. The update will add about 10k words or slightly less.

The new update is here. Added 9k words to finish the four sidestories to be able to progress through the story, the part after that is still a work in progress.

The next update will consist of optional lore for you to read, as well as trying to finish chapter 2 and adding variables in certian areas to change character relationships that I have skipped until now.

Yet another progress report for taking too long for the next update. I have been stuck on a scene for quite some time, but now that I have gotten out of that slump, I should be able to finish it much faster now. We will start to get into the meat of the story before chapter three starts.

If you have any questions about the story or questions for me, please feel free to ask. Who knows, your questions might give me ideas to implement into the story or point out some plot points that I inadvertently created. 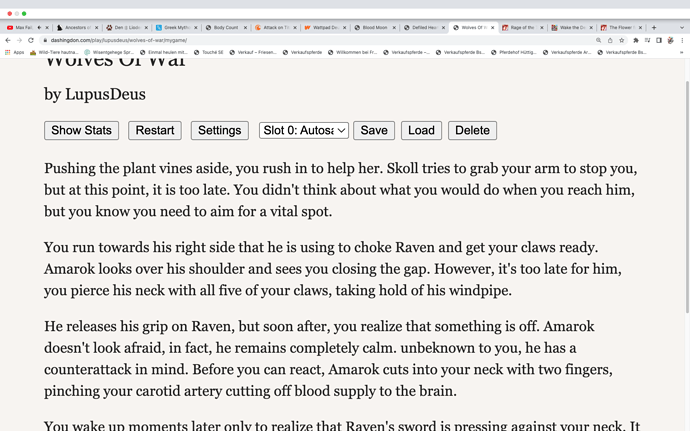 found a typo, Unbeknow starts with a capital U

Just released the new version. Added 7k words to finish chapter two, and changes to the stat screen. Stats are no longer shown, instead, stats are ranked based on how high they are. Added another stat that will increase based on your four base stats, increasing intelligence will add a bonus.

A quick update for the upcoming version. This update will be the biggest one yet, I am currently at 10k words and I finally remembered to add relationship changes based on your choices for all chapters. You will no longer be able to buy armor or weapons from the blacksmith, it didn’t fit the story. (Goodbye four-hundred lines of code) You will still be able to get a sword if you don’t want to use claws. I plan to release the update within the next two months depending on how much work I am able to get done. You should expect an added word count between 15k and 20k words.

Thank god the smith store is gone. No hard feelings for the guy. I preferred the game to depend on skills instead of money and items. Besides we are a werewolf stronger than any human so we are a weapon technically

The next update has been pushed back a month or two. I’m trying to aim for a release date sometime in November, but that won’t be a guarantee. Work on the game has been slow but steady, trying to spend at least an hour a day on it if not more.

The current projected word count will be closer to 20k if not more. There are a few scenes I have to finish and some testing from my editors and I. My Patreon is back up and running if you wish to support me. Usually, it incentivizes me to find more time to work on the game but also causes me anxiety because I feel like I’m not getting enough done to appease those who do support me. There are no longer tiers for my Patreon, support me for as little as $1 or as much as you want to gain early access to the demo. The release of the demo will be announced to the public on Patreon, no need to pay to get the announcement, the demo will be released two weeks after it is released for Patreon supporters.

The new update is here!! Added 21k words with two branching paths. Two of the newly introduced characters might be future RO’s, we will see how it goes.

As always, I am looking for feedback about any bugs or spelling errors, as well as opinions on the story itself.

Thank you for the update author