Is this suppose to happen? Cuz I know the other choices end the game 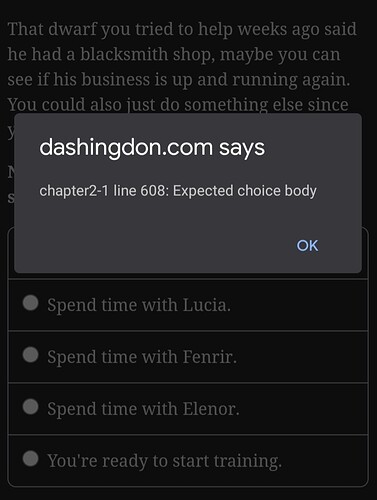 @Netherate That’s also the end of the demo, there is no command for it to end the game so it’s giving the error message. This is mainly due to my ineptitude, or rather rushing out the demo at the last minute because I forgot about it.

Although, my real concern here is that I forgot to end the demo early, because the part you managed to get to wasn’t supposed to be released yet. So, I guess the good news is that everyone got a bigger update than expected.

The new version just dropped with a 6,000 word update and some new experimental features. I plan on finishing chapter two before going back and adding stat changes to the choices you make, as well as reworking some of the content. (Possible adding one new feature and more choices.) 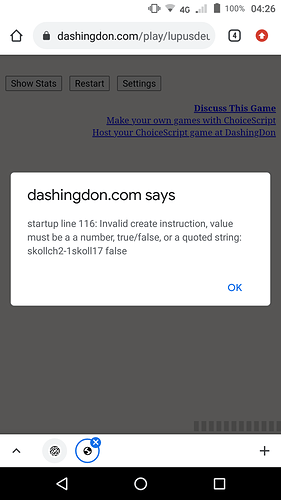 Just tried loading the demo and this popped up.

I just fixed it.

Oi there @Phantmwolf just started this and are there ACTUAL humans in the so called organisation?

This clump of repeated text is very weird and breaks the immersion of the story. I mean that guy literally calls the hooded vampire girl every time MC asks a question…

Again this feels odd if the MC is against or reluctant from the start, they literally agreed to stay and see what can do for them after a few hour sleep?

I’m surprised no one has caught this so far. I’ll be sure to fix it.

Thanks, the reluctant/against MC agreeing to stay with them after few hours just like that feels odd too…

Also @Phantmwolf are you sure the year is 1673? I mean a LOT of stuff described so far seem WAY too out of time for that time period, unless it’s not earth at all or a different dimension/alternate universe.

I expected that there would be a few things in there that would not align with the time period. I will go back to rewrite scenes after I’m done with the second chapter. For now, could you give me some examples?

I don’t recall that. I must have a bad memory.

Hey @Phantmwolf why is a human (that Etu guy) is leading an organisation full of mythological creatures?

He founded the organization. He also has a backstory of rising from rags to riches so that gives him clout among the others to hold a position of power and respect in the organisation.

He founded the organization. He also has a backstory of rising from rags to riches so that gives him clout among the others to hold a position of power and respect in the organisation.

That’s NOT my question at all buddy… I asked why a HUMAN is leading the organisation of mythical creatures/monsters… Not whether he founded it or not or how he got rich, I too read the backstory… 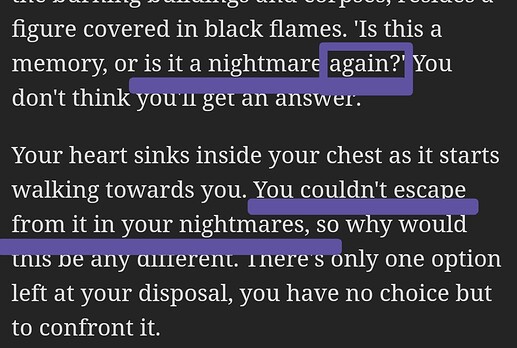 Well, him occupying the position of power is the reason for him leading the organisation. That should be obvious enough.
The reason why he occupies the said position, I mentioned.
Now if you are asking, why him, out of everyone else or not a supernatural in his place, that is a question that the author can answer.

Just curious, what’s wrong with him leading the organisation?

why him, out of everyone else or not a supernatural in his place, that is a question that the author can answer.

Yup, lol this… I wanna know this.