Crashing waves. An eternal blue sea amidst a plane of rolling green hills. A young girl of white and gold, sitting in a wavebeaten chair far too large for her, reading a massive tome.

She looks up as you peer in from the window, and beckons you inside. The room is white and black.

“You’re just in time! And I’ve made tea! Would you like any?”

“That’s okay. I’m here to tell you what this story is about. But not too much. Don’t want to spoil anything for you. I’ve already read it, though.”

She grins, with the unfounded confidence and pride only children can have. She tilts the book, showing you the spine. The Moon Shone Green is written in silver.

“In this story, you’ll be a private investigator in a strange world, hired to find…well, me.” Another grin.

“But I won’t just be sitting in this chair! I’ll be making more tea for you, hiding in the last chapter.”

She smacks her forehead.

“Whoops! I wasn’t supposed to tell you that! I mean, um, I could also be hiding in the third chapter! Or maybe the prologue…”

“Anyway, there will be some dark themes. So, be aware of that.”

“Oh! And it will be the first book in a series, but I was told that it will be a complete story. Not sure why I’d need to tell you that, considering it’s in binding, and that would by nature make it a ‘complete’ story. But, there you go.”

“And of course there’s going to be…um…romance.” Her cheeks grow ever so slightly flushed, and she can’t help herself from giggling.

"Not all of the ROs are in the story yet, but they will be soon! You can look under this table if you want to know more about them.

“And that’s that! I hope you enjoy! Please, don’t hesitate with your feedback!”

She hands you the book.

If you look through this window, you’ll see the Realm of Discordance. Its a dark place. You’re welcome to join, if you’d like. We’ve prepared tea!

looks at prior posts

For that little synopsis blurb alone you receive a like

will check out the demo itself after some sleep lol

Yeah! Thanks for checking it out! Sorry I never got back to you.

If you’re still curious, I intended “her touch is like quicksand” to imply her being capable of pulling you in easily, both physically and otherwise.

This also alerted me to the fact that I uploaded an earlier draft instead of the completed prologue. So, thanks!

gasp Is this Fables making its way to CoG?!

@JBento Thanks! A save system has since been added, and I hopefully fixed all the weird issues. No idea what was going on with the whole “40 day inconsistency”. Maybe they were metaphorical tears or something.

it seems like the saves dont have saves at all

@Wannabe_Human like the poster above reported save system not fully in place at a glance will say haven’t fully played through the demo but did notice a coding issue of sorts. Not sure if it’s because the path isn’t finished or not though when selecting the gun it goes as far as shooting at the man then loops back to where we select a weapon.

@Valixon That’s because you died. As the cops discovered, bullets don’t work too well against the Oxblood Pyromaniac. It loops back to an earlier section. I’ll try to make that clearer.

It seems the saves have run off to Wonderland. Never fear, they’ve been captured now.

The city council would like to inform you that angels do not exist. If you think you’ve seen an Angel, please find the tallest building, go to the pay phone on the roof, dial 7 three times, and ask for “Saul”.

Every MC will have the ability to access the memories of people and objects, but there will be a way to customize the nature of it.

That little blurb before was cute! And the story, so far, is wonderful overall!

Great start! Find this… when you choose the fun it takes you back to when you enter the room and makes you choose again.

It seems the passage where you choose the gun has grown repulsed by its position, and seeks to take over the other one. I’ll put my best people on it, and we’ll have it restrained within the minute.

It is supposed to loop back there if you choose the gun, though. As the officers discovered, guns don’t work all that well against the Oxblood Pyro.

What if there’s a twist in the end that alice was a boy??? *kiddin just reminded me of TaishoxAlice 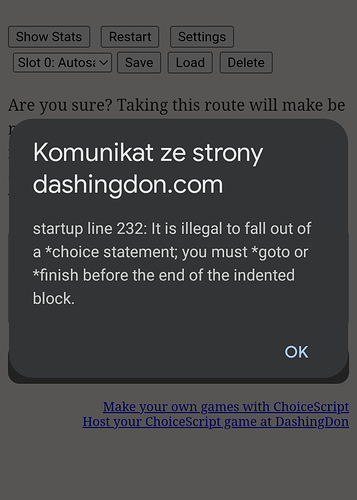 Hmm. It seems the Gods really don’t want you to take your own path. They’re even willing to break the game to ensure their divine will. But don’t worry. We’ll show them.

Weekly Update: Chapter 1 has begun. Three of the five ROs will be introduced here, as well as more details of the world. The Lore in the stats page has been fleshed out a bit more. As always, any feedback is appreciated.