First off, amazing concept, I really like the story so far and the characters, I especially like Scarlet, she’s adorable. I like the concept of the pulse and instead of giving people magic powers, it’s more of a mutation which I find more unique in a sense, and I really like our power set, even if we haven’t seen it in action, I really hope that the more times we use our powers/ train with it, the more we can maybe learn to control it/apply it in different ways? Who knows!

Also want to say, that wow, the tension in the room was so surreal that my body physically was screaming at me to leave as fast as possible, and heck, I’m not even in there, that’s how good of a portrayal of emotion you had on me, also the seven where you flirt with Carter…ooooh boy, wow, I was embarrassed. Anyways, moving on!

There were some bugs here and there. One of them being Carter, (since I chose male agents) was being called Harper instead? Which I assume the female counterpart, not sure.
There was also the loop when you’re asking Jacky questions, once you ask a question, it loops back to you entering the office again, and it keeps going on all questions.
Another one was when meeting Kris, the paragraph that describes him, repeated itself twice in the same page. 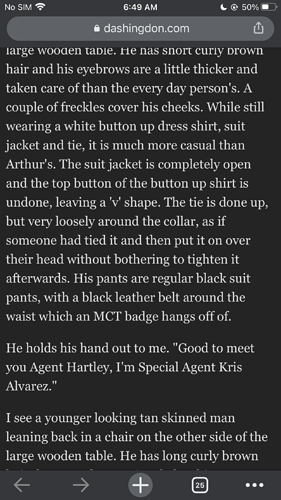 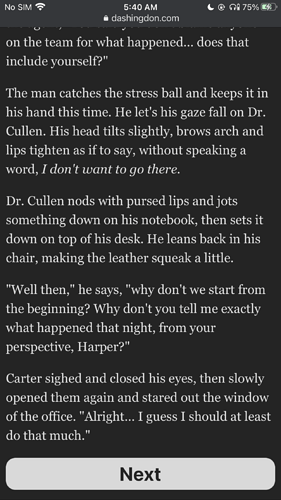 Other than those, I really like this game, I hope to see more in the future because this is super interesting, and honestly, I’d certainly read more if you decided to make this a series? Who knows. I wish you luck on the project and I’m sure I’ll be reading all future updates

I was thinking that maybe the murder that’s going on by someone who’s researching powers? Or trying to replicate them. Like when he opened his chest to take a sample of his lungs, why? Maybe for his mutation, maybe he wants to give themselves their own mutation and have more than one, and maybe he failed or got what he wanted and, having no more use for the body, dumbed it like trash because he already got what he wanted and didn’t care anymore? Don’t know why my brain concocted this, but it did, and it sounds reasonable to me at least, let me know

Thanks. Keep up the good work. Wish i had the imagination to write a story. Probably be able to think of one but i wouldn’t be able to put it together fluidly.

Keep working on this, this is awesome

I shall look into why that error popped up since there should have been one more page after that. But thank you so much for the kind words! There will be a couple more side characters to be introduced, yes! And as of right now, all of the MCT is romanceable. This includes Elizabeth/Arthur, Harper/Carter, Sarah/Samuel, Kris/Kristina, and Jacky!

I am planning for there to be five different romanceable options!

First off, thank you so much for the kind words! Seeing you and everyone else here being so invested in this story has honestly made me tear up from relief and happiness. Seriously, you guys are awesome.

As for the bugs, I have now fixed where it would say Harper in the Male agents route and Kris’s intro will no longer play twice! I’ll add in something for Jacky’s loop later tonight once I get off work as well!

Without any spoilers - you will indeed have the option to hone your ability and train with it along the way, and the other members of the MCT will as well! Seeing such a positive response has been so overwhelming in the best way possible, and I am definitely planning on finishing this book (5 Chapters, give or take). But I also have ideas for a total of three books in this series, which I will most certainly be trying to pursue now!

Again, thank you so much for your feedback and the kind words. I really wanted to set the foundation for the characters in this chapter and make them feel like real people, and I am very glad to read the responses and see that I accomplished that feeling! There is definitely going to be more to come!

Yay! Hearing the news that you have ideas for three books made me squeal. Honestly very invested and I’ll definitely leave more feedback in the future (without being annoying).

Also really excited to learn the mutations of all the team members and how to incorporate/meld them together as the team becomes closer to solving the case.

Keep up the amazing work, I’m rooting for you!

Thank you so much! There is definitely more to come!

I’m a very amateur coder, so I will eventually attempt to figure out the more technical aspects of things, but I think I’ll do that after I finish writing the book. I will definitely look into this though. I’m glad you enjoyed it so far!

The save function is probably the easiest part of ChoiceScript (to me). At the end of your variables (so right before the little paragraph that starts with “thank you” and right after the scene_list for your own code) just put in the command *sm_init gamename | number of saves.

So, for you it might be:
*sm_init thebureau | 5
or something.

It’s a super useful option for your readers, especially given how long chapter one already seems to be. That said, if you don’t want to use it, no pressure!

I really like the story so far and the characters are intriguing, I look forward to getting to know them more

Thank you! I’m very glad you liked the first chapter so far!

I already love this so much!! Mc’s powers remind me of Dazai from BSD and it’s so cool!!

Can’t wait for the next update, keep up the good work:D I’ll definitely support you​:sparkling_heart:

I’m so glad you like it so far! I’m really looking forward to getting to write particular scenes in this chapter, since it’s going to have two 1 on 1 scenes with MC and a character of the players choice. Should be very interesting!

I know I’m supposed to be unbiased, but I fully agree with this sentiment

I feel as though I should address this a bit more now that I’ve had time to think on it. I realized that “Cold” was the wrong word to describe that choice in the game, and have since changed it to “Reserved”. I don’t think I’ll necessarily have a lot of “cold” choices in the game and I feel like you (and everyone else who usually plays characters that way) deserves a reason as to why.

So, even though there will be many different ways for people to play their MC (Shy, Reserved, Passive, Confrontational, Flirtatious, Outgoing, etc.) Cold isn’t really one I can think of that would allow the story to flow as naturally as all the other choices as the main theme of book one is “grief”. One of the main ideas of the book is being able to see how each character deals with grief and you being a part of that journey towards eventual closure, and through all the personality traits that would be possible with a theme such as that, I don’t feel like cold responses would be one of those, if that makes sense.

Don’t get me wrong, there’s still going to be Forthright answers that don’t beat around the bush (Like directly calling out Elizabeth/Arthur on not reading the files or demanding to know what’s going on after Sarah/Samuel storms out of the meeting room), so a straight to business, no beating around the bush approach is still available!

I apologize for the confusion and am really sorry if this brings any disappointment. I myself occasionally play characters that are quite cold, so I can totally see the appeal of it, and in another series down the line I could see myself definitely adding that option in as a character trait!