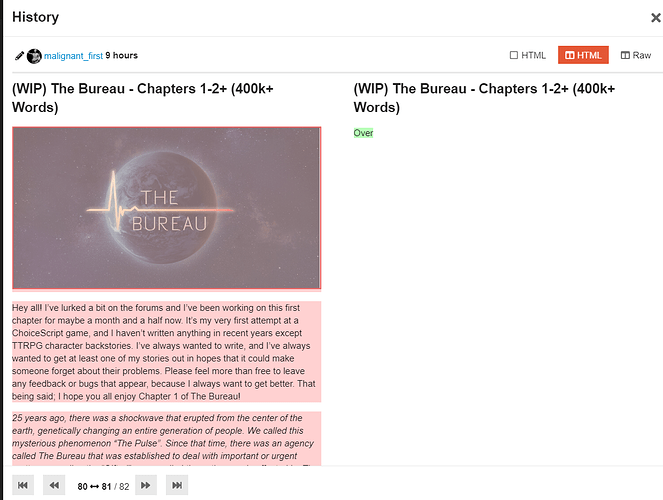 while we’re at it. also this: title can be edited by other people too.

Thank god! Got scared there for a sec

Is it possible to find who edited it to “Over” I think the fact that someone did such a thing is really not good and maybe needs a temporary ban or there has to be some consequences for doing something like this.

Is it possible to find who edited it to “Over”

It definitely IS, because I just did. All you have to do is click the little edit note (the orange pencil at the top right), and scroll back through the edits until you find the right edit.

It’s very much against the rules to edit someone’s post without their express permission.

I’m sorry, I meant to reply to the post above yours, which was saying there should be consequences for the person who did it.

Right, so I should probably give a quick update on where I’m at with… everything. First off I want to say, thank you everyone for the support when I needed it. Multiple people, readers and other authors alike, reached out to me and really helped get me in a better mindset. Obviously I was upset when it happened, and yeah it still kind of blows that the progress from those links are gone, but I’m just ready to leave it behind me.

I didn’t have those numbers when I first started, and they’ll probably never be that high again, but que sera sera as they say. I didn’t have those numbers when I started writing, so it’s not going to stop me from writing in the future. I just want to continue writing the best story I can, with the best characters I can, and I hope that people can read my story and think of a character in it that they can appreciate or relate to, and I hope I can write something that can make people think, not just on a logical level, but on a spiritual and empathetic one. Most of all though, I hope people can have fun with it.

So thank you to everyone again, and I hope you continue to enjoy what’s still to come in this story, and in this series.

I have no idea how much it was up to before, but it’s already back up to 178, which seems pretty nifty to me, considering there was no update between the Incident (that’s how we’re referring to it, yeah?) and now.

with the best characters I can

Fun fact: I’ve often thought of a head on head battle with the MCT and UB, and while UB would absolutely win every single time because vampire, it’s so much fun to think of Nate/Nat and Kris/Kristina just standing by watching it, talking about how unnecessary it is.

I’m pretty sure that if Ryder just human torches themselves they win, because none of UB can so much as get near them without becoming an overdone roast.

This might be a nitpick, but if you sit with Elizabeth on the bullet train, and ask about her mutation, you still end up asking Christine about it later on, which seems a bit weird as technically you would already know, and that’s not have to ask.

Interesting, that is a bit of an oversight on my part then because I remember telling myself to make sure that didn’t happen when I was on that part of the book. Is that in the hotel room with K. Alvarez? And if so, which option if you recall did that happen in?

It’s just after, when you go to the crime seen, you ask out her mutation, regardless of weather or not you asked her about it earlier.