I’ve begun work on my new game The Arcanist’s Journey. 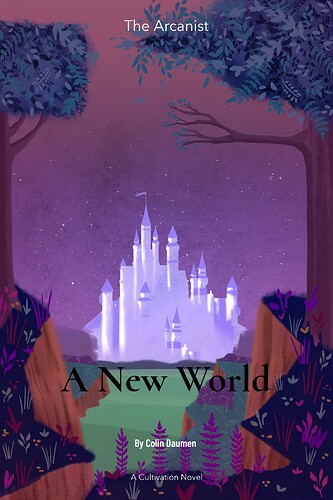 You will play a boy/girl who has abandoned their former life doomed to poverty after discovering an aptitude toward magic. You will find yourself travelling across the continent of Michiwitt, a land rich in adventure and secrets to discover. You will train as a mage at one of the Nine Great Academies of magic, where you will find that everything isn’t as it seems. Learn to control the five basic elements of magic; Pyromancy, Hydrosophy, Theurgy, Illusion, and Summoning, as you make your way through a story of life, death and beyond. The Wheel of Life will be an integral part of the story to explore as you delve into the mysteries of Michiwitt and the enteties known as the Voidwoken.

So far I am at 80000 words (excluding commands) with the plan being to expand it to a minimum of 150k words. However, this may increase still, as with where the narrative is at right now, there is a lot more that I wish to expand upon. I’m trying to create a deep world to explore, and it seems I’ve only just reached the true beginning of this breadth of work (there is a LOT of work to do lol).

One of the main things I’m working on, which is quite arduous, is trying to make all spells usable when there is a choice given. There are currently 18 spells to choose from, and writing for each of them makes some battles really long to write xD.

So far I have yet to finely polish the coding of this game, which will hopefully come in time as I’m focusing on the story narrative direction. I believe it will probably take three to four months to end the story, and another few to polish.

Any and all criticism is highly wanted, as I wish to fine tune this baby to the best of my capabilities. I thank you for taking the time to read through this rough game.

Setting: The setting of this game is an alternate fantasy reality, where things such as magic and faith along with races like elves and dwarves are common place. A common tongue is spoken on the continent of Michiwitt, which you find yourself in. Inspiration comes from portal fantasies and reincarnation fantasy and the worlds they usually depict.

I must say I like this prospect. I will for sure be keeping my eye on this.

I will provide more in depth feedback once I’ve read the whole thing, but there is a small thing on the first page that confuses me.

On the very first page, it is stated that you are “the youngest male of your family.”

I understandbly thought, “Ok, this is genderlocked. Would prefer a choice but I’ll give it a chance.”

then immediately I was presented with a choice to choose my gender.

I don’t know if there is a word that describes whiplash while reading, but if there is then I just experienced it.

Don’t take this as an insult I love the Idea, and I hope I will love the game.

Ahaha oops, I guess I left that in there accidentally. I had recently decided to implement a non-gender locked story due to request from others. I’ll fix that immediately.

I will do more later, but for now this is everything. I’ll keep the tab open so that I don’t lose progress.

I’m not sure how much is left in the demo, I just got to the point where you choose wether to go to the adventurer’s guild, the mage’s guild, or the training yard.

But I, and I cannot stress this enough, Enjoyed it.

I hope you keep working on it, keep up the good work!

You are an absolute star! These are just the perfect things I need to work on.

I’ll get to work on that immediately. And as you have guessed, I decided to add gender and hair customizations after completing the majority of the WIP and so I’ll need to go over those issues.