To play the demo, go here: Sent to Erodania (dashingdon.com)

Holy fkn Devils!!! This is a gender locked male story? Throughout the short demo I 100% thought the playable character/MC is a female and the vibes are strong in that direction… It did NOT felt like I was playing a male character at all.

i do love me some romcom although its kinda moving way too fast. also, gender locked to male? are all the ros on a gender locked too? it seems like a nice light hearted story

Although it’s too little too fast to come to a decision, this is not for me. I don’t think I’ll be interestedin anyway. G’Luck with this project though @beebavel.

Is this finally an isekai CYoA with a possible harem? Boss! 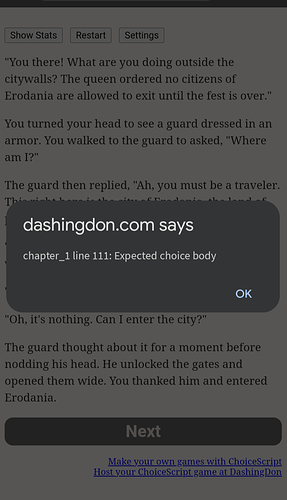 It’s a good start but you might wanna make a post talking a bit about the RO’s (nothing too spoilery, just gender, who’s able to romance them and appearance is already good to go) since it’s advertised as a Rom-Com game.

It’s too short to judge sadly so I don’t have a proper feeling for this story. The bread scene was funny through. I really wanted to see the priceless reaction to my choice