yes, you do not have to romance/marry someone. Depending on your objective, you can be evil overlord, or the destroyer of the world, or anything. I will try to include multiple routes here.

As far as marriage goes Cassius may be more my mc’s speed, though the other prince does sound nice.

It all depends I like nice guys well enough too as long as they’re preferably fashionable gentlemen with their own personality and secrets (look at Altair in Keeper, for example) and not bland. 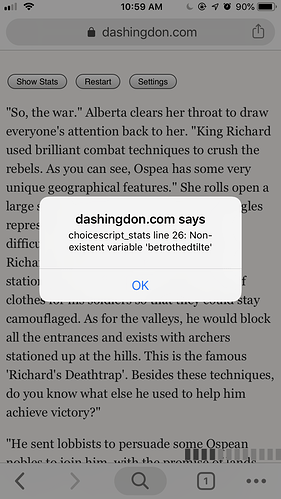 This shows up whenever I try to access the stats

The option where you ask to learn about the princess is broken.

So i can burn peoples lands to the ground well i hope i can.

So the Mc doesn’t get magic?

Seem interesting so far. Looking forward of further introduction of the other RI. I l already know who to romance. :]

Yay, I can keep on reading now!

Have you thought of implementing a save system perhaps? Always makes it easier to test out different options for errors.

This was pretty interesting. I liked the intrigue of all the characters, and how the player can simply say they need more information without having to decide right away for certain choices. I also liked what we’ve seen so far of the setting and worldbuilding – Ashar certainly seems like an interesting place.

My biggest complaint is that it’s difficult to tell when events actually happened, such as the Insurgent War or the rebellions, and that having so many place/character names being introduced so quickly can be confusing. Perhaps there can be a character and info page on the stats screen that’s similar to the info on the first post? Also, perhaps I missed it, but how old is the MC?

Looking forward to meeting the other characters!