Welp, I'm sorry that it's come to this

I was attempting to make a game but it didn’t work out because my motivation and drive to turn my idea into a some died so in just keeping the story where it originally was. I can’t delete threads so I’m moving this to off topic because I don’t know what to do with myself anymore lol. Sorry.

mmmmmmmm…
Really good just that first page sucked me in!!

i love it, but what is the player character?

Its not much to go on but the choices where we could decide our disposition on whatever is at hand? I want more of that. Especially since this is first person, I’d hate to be told how I feel too many times.

Though I do understand that the stricture is a necessity at times for the sake of narrative simplicity.

As in related to their clan and power? That will be explained either when I add more to the prologue or in the next chapters!

Of course!! I plan to add them only when necessary in future chapters as I want readers to feel as involved as possible! For the prologue everything is following a format but I plan to make choices and feelings matter in the next chapters!

so how much progress of chapter one has been made?

Less than half, I’d say? It’s rough and bumpy soo I’m tying to outline right now and there’s a lot more to be done said but I’ll try to have one soon.

Interesting story, I am looking forward to seeing how it plays out!

It looks like a good (if short) start. I’d have to agree with @BoisterousBumblebee: we need more control over the MC, especially for things like:

Rey then spit inside my cage and had my arms not been chained behind my back then I would have grabbed him then and there.

I don’t want to murder him…

I mean, I wouldn’t care if he died, but it wouldn’t do me any good.

Also, I took a look at your code (hopefully that’s okay…

), and I note that you’re copying and pasting everything for each choice: that’s a very bad idea. For example, with gender you can have something like the following:

This would need to go right after the chapter list (which also need to be changed… I’ll get to that later.)

Then, when you choose your gender, have something like this:

Then whenever you need to say (for example) “boy” or “girl”, just use ${boygirl} instead.

This also applies to Andrei, although you’d need a different set of variables for him/her (say a_boygirl or something like that).

Regarding the chapter list: don’t have chapters that don’t exist (like animals and variables). This way the game shouldn’t crash when the player finishes.

Otherwise, I think it looks good. Good luck with your game.

I can’t seem to move on from this page, as it has infinite load 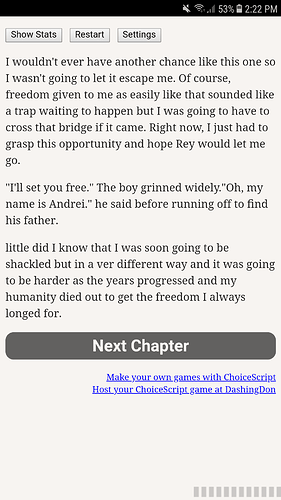 Really liking it so far. Getting vibes from fallen hero with the mc

So I tried clicking the demo link and this is what the page says:

Sorry for the inconvenience, but this game is set to private and so it cannot be accessed via the short URL.

You will need to contact the author for a direct link for a private game.

Do I really need to PM you for the direct link or have you just made the demo private for now?

I have the same question as @soprano though. I got all excited about this, first time ever reading through a full summary and everything, and then my hopes and dreams were immediately crushed! When I saw that, I said, out loud, “What the fuck?” XD

Sorry! It’s back! I went I hadn’t meant to private it but I guess I did before I went to sleep, my bad!

No, no! Sorry! It is back. I had accidentally made it private before bed last night. I didn’t read the little text under the box correctly lol

Wow!! Your story gave me such an amazing anime vibe. It’s been a while since I’ve read a well-written WIP and with a great plot at that. I’m looking forward to your future updates. Keep up good work, author!!

Hey, no worries! Happens to the best of us

Read the demo, it seems like a great start. I’d advise putting a choice in what we would do to Rey as well, because what if I don’t want to harm him? The rest seems fine, it truly has potential and I can’t wait to see where you go with this!